Akron Embarks on $1.4B Effort to Modernize Sewer System

The Ohio Interceptor Tunnel will be dug by a tunnel-boring machine and is designed to funnel waster-water from local waterways to a treatment plant. 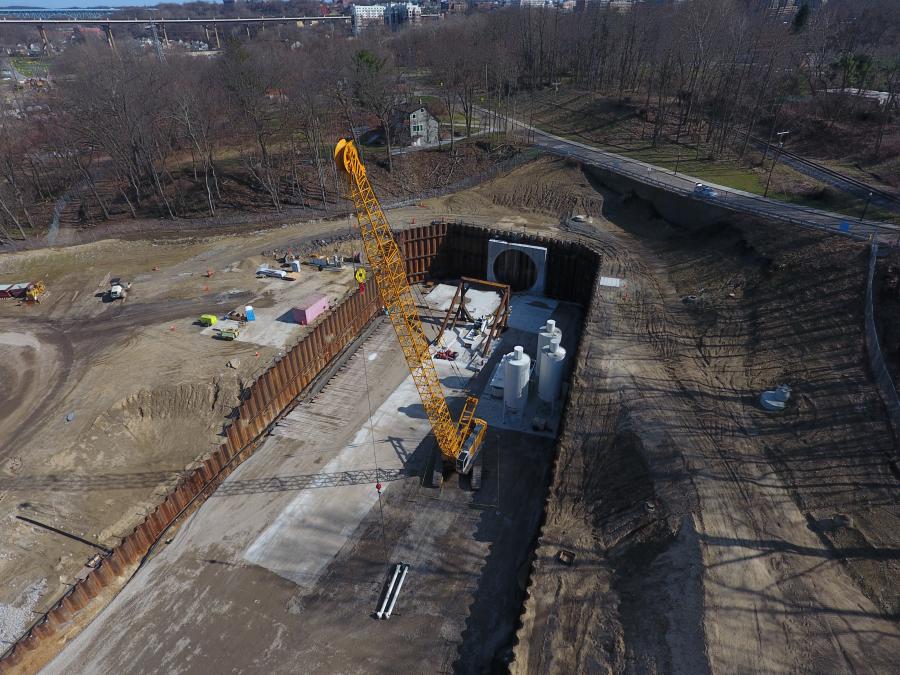 Later this summer, a convoy of trucks will be moving into downtown Akron, Ohio, carrying huge pieces of what will eventually be a massive tunnel-boring machine.

Later this summer, a convoy of trucks will be moving into downtown Akron, Ohio, carrying huge pieces of what will eventually be a massive tunnel-boring machine.

Once the pieces are put together, the machine will begin the process of boring a 6,240-ft. (1,901 km) long underground tunnel designed to funnel waste-water away from local waterways and into the city's sewage treatment plant.

The Ohio Canal Interceptor Tunnel (OCIT) is the largest element of the Akron Waterways Renewed Project, a $1.4 billion effort to modernize the city's sewer system and improve water quality for residents in the Cuyahoga Valley.

The $190 million OCIT will control sewer overflow from nine different locations along the Cuyahoga and the Little Cuyahoga rivers, along with their tributaries, and will store more than 25 million gallons of that overflow.

Work on the OCIT project began Nov. 5, 2015, and, according to Akron city engineer Mike Wytrzyszczewski (known as Mike W.), plans call for sewage to begin running through the tunnel by Dec. 31, 2018. Other ancillary parts of the project, including rehabbing part of the Little Cuyahoga, will be finished in mid-2019.

“We started work that first day doing some relocation of utilities and began the temporary relocation of the Akron Historic Tow-Path Trail in order to build the tunnel-boring machine portal entrance, a 3½-year-relocation,” he said. “The new sewer tunnel will pick up a lot of the trunk sewers that come through the downtown. Those are bigger sewer lines — ones that you could almost walk in.”

The combined sewage also includes storm drains, Wytrzyszczewski said. On sunny days in Akron, the system experiences a dry-weather flow, meaning it primarily handles sink and toilet water flow. When a big rain event occurs, however, these low flows can increase a hundred-fold.

“When that happens, in some of our sewers, we can go from 1 million gallons a day to as much as 40 or 50 million gallons a day,” he said. “Ninety-five percent or more is rainwater, but it is still considered sewage. So this work will improve our sewage flow and overall water quality.”

The OCIT project is being managed by a joint venture of Kenny Construction in Chicago and the Obayashi Corporation, headquartered in Japan. Both firms are noted for their long history of civil engineering projects. Kenny, in particular, is a specialist in tunnel construction all over the world.

Work to Happen Beneath the Downtown

At depths of 70 to 160 ft. (21.3 to 48.8 m), the tunnel will be 27 ft. (8.2 m) in diameter and stretch from the Little Cuyahoga River north of the Mustill Store on the Ohio & Erie Towpath and connect to Lock 1 of the Ohio Canal at West Exchange Street in the heart of Akron's business district.

Wytrzyszczewski projects the tunnel-boring to begin in mid-August, but from the first day of the project until then, work has focused on getting the ancillary sewer lines installed — what he called “near-surface structures,” or anything above 30 to 40 ft. (9.1 to 12.2 m) deep. He said there are three main work sites within the entire project and around them lots of this near-surface work will continue through the end of next year.

“They are diverting all of our old sewers that were tied in to our existing combined sewer tunnel,” he said. “We have to coordinate it all so that obviously the sewage does not go into the new tunnel before we are ready for it. In the process we are eliminating nine racks, or overflow points, that go into the local waterways.”

Underground blasting was done from last November through mid-April to help crews install connections between shafts that feed into the OCIT, but Wytrzyszczewski said the blasting was not related at all to the construction of the tunnel itself, which will be the exclusive job of the professionals boring the underground aqueduct.

“These miners want nice, undisturbed ground for their work because then it is a little more stable and more predictable,” he added.

A Locally Made Machine

The tunnel-boring machine to be used in Akron was built by The Robbins Company, based in nearby Solon, Ohio. Robbins has been a trusted name in the manufacture of tunneling equipment for 65 years and is involved in projects worldwide.

As of mid-April, Wytrzyszczewski said that the machine to be used on his city's project was about 90 percent constructed. When finished, it will undergo factory-testing acceptance in May, a process where all the moving pieces and parts will be run through their paces. Once that is completed, Robbins will take it all apart and transport it to Akron for reassembly in June and July.

Multiple trips will be needed to move the gigantic machine pieces the 31 mi. (59.8 km) from Solon to Akron, but some parts that are not essential to the factory testing are already on-site, Wytrzyszczewski said.

Tailored for the Job

“This machine is specifically tailored to the type of work needed here,” he said. “It is built for the exact opening we need, a 30-foot outside diameter and a finished 27-foot inside diameter tunnel, so the shield and the head of the machine are all custom-manufactured. This is what Robbins calls its crossover machine, or what we call a dual-mode machine, meaning it will work in earth-pressure-balance mode or in open mode when it encounters rock. We really like it because it can work through the specific soils and geo-tec conditions we have here.”

Wytrzyszczewski anticipates the tunnel boring to take seven to nine months to complete.

As the machine moves slowly along its path, it also will be installing pre-cast concrete rings to line the tunnel.

The linings are made in Macedonia, a town about 20 mi. (32.1 km) north of Akron, and are placed in the tunnel immediately behind the boring machine's shield, proving the efficiency and versatility of the Robbins product.

Each pre-cast concrete segment is 5-ft. (1.4 m) long and 18-in. (45.7 cm) thick. They are reinforced with high-strength steel fiber and have a “7+1” orientation, which Wytrzyszczewski explained as meaning that seven of the big steel pieces fit together to create one 5-foot-long ring.

“Imagine them being like the elbow piece on an HVAC fitting that can bend and turn,” he said.

A Variety of Equipment Needed

In general terms, then, the OCIT is really being completed as the boring machine moves along.

“Helping accomplish that are crews that are also grouting where there are annular gaps between the concrete segments and the earth that were just bored because it is not exactly a 30-foot diameter, but a little bigger, so all the joints are being bolted together and the gaskets are sealed off,” he said.

A rail system will move equipment into the tunnel and a conveyor will be erected to haul out all the dirt and rock.

In addition, he said there are currently about eight stationery cranes of different sizes and manufacturers working on the job. There are also a number of earthmoving machines and lots of off-road trucks to move the spoil piles just across the Little Cuyahoga.

“At this point [in April] we have upwards of 50 people working on the project and that figure will increase once the mining starts,” he said. “There will then be multiple shifts on the mining, although that number is still to be decided, as well as if they are going to work 5 days or 6. After the dig is over, it will then start to level back out to where it is now.”

When finished, the OCIT will connect to a diversion structure that has been tied into Akron's existing sewer and will move all the sewage to the treatment plant.

“So, once the tunnel has been mined, the construction is past the most difficult part and is mostly over,” he said.

Wytrzyszczewski expects that point to be reached early next spring, especially if the area gets another mild winter as it did each of the last two years of work.—CEG