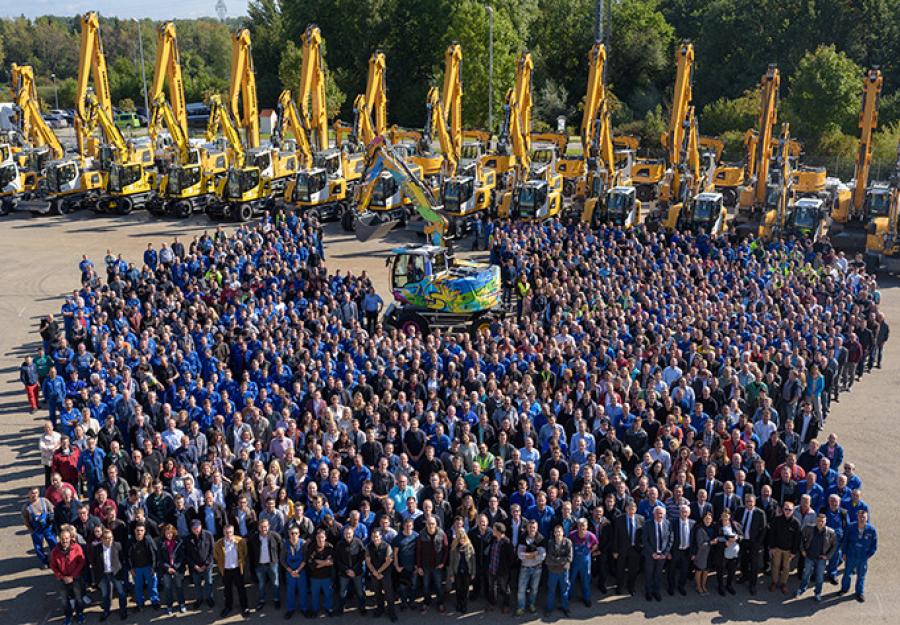 To mark the special occasion, the 75,000th excavator from Liebherr, a A 918 Compact Litronic, received a very special design: The anniversary machine was designed by the graffiti artist MadC.

Liebherr announced Sept. 25, that the 75,000th excavator at Liebherr-Hydraulikbagger GmbH, the founding plant of the Liebherr Group, has been delivered. This is a good reason for the company and its approximately 1,700 employees to celebrate. The anniversary machine was unveiled to the staff during a celebratory event in the production plant. The A 918 Compact Litronic wheeled excavator received a special graffiti design by Claudia Walde, aka MadC, one of the world's most well-known graffiti artists. The compact wheeled excavator will join the fleet of Liebherr Rental Services.

The properties of the A 918 Compact Litronic still correspond to the original requirements of the company's founder Dr.-Ing. E.h. Hans Liebherr for a mobile, robust and ergonomic earthmoving machine with high availability. Liebherr's wheeled excavators are known all over the world for their efficiency, flexibility and performance because they combine modern technology with many years of experience in the development and production of construction machines. This linking of tradition and innovation is decisive for the success of the company.

The Key Developments in the History of Liebherr Wheeled Excavators

Back in 1954, Hans Liebherr laid the foundation for a new type of machine with his first L 300 wheeled excavator which to this day is still among the best in the world. With its six wheels the lightweight (7.5 tonnes) and very powerful (25 hp) L 300 was the first hydraulic excavator in Europe. Other aspects of its design were also unique: The operator's cab, the boom, as well as the combined face shovel/backhoe bucket, appeared for the first time on a construction machine. The slewing ring was developed 2 / 4 and produced in-house. However, the drive of this machine was still mechanical. The new concept quickly convinced a large number of construction companies and around 110 machines were delivered in the first three years.

Another big innovation followed a short time later. The A 650 wheeled excavator was the first fully hydraulic wheeled excavator from Liebherr in 1960. In addition to the hydraulic equipment, it also had a hydraulic drive. With its operating weight of 16 tonnes the machine had a power rating of 60 hp, thus representing an important milestone in the history of the wheeled excavator.

Liebherr-Hydraulikbagger GmbH also has another anniversary to celebrate this year. In 1967 Liebherr developed a so-called railroader, the A 400 ZW, for use on railway tracks. It is a special version of the wheeled excavator which can be used on rails or on the road. For over 50 years now the company has been successfully offering railroaders in its range of products and it quickly gained market leadership in this segment in Germany.

From the outset it was important to Hans Liebherr to develop and produce key technologies in-house. This became especially clear in 1983 with the A 912 wheeled excavator. Its diesel engine, hydraulic pump, swivelling drive together with planetary gearbox, excavator axles as well as gearbox and transfer box in the undercarriage were all now manufactured in-house.

In 1989 the Litronic followed as another innovation highlight from Liebherr. The Litronic is a complete system of intelligent electronics and functional hydraulics for monitoring, controlling and coordinating all key systems of the excavator. This system was used for the first time in the A 912 Litronic and also continues to optimise the efficiency of every Liebherr construction machine in its modified form today.

The perfect interaction of machine and tool attachment plays a decisive role for successful deployment on site. This is why Liebherr also invested in this area and in 2001 was able to present its fully automatic quick coupler system LIKUFIX. With LIKUFIX the machine operator can change all mechanical and hydraulic tool 3 / 4 attachments at the touch of a button from the cab as well as adjust the hydraulic pressures and volumes.

Further developments are continually being added in all areas in line with the motto, "standing still is a step backwards". Since the beginning of the 2000s the innovations have been shaped by the topic of efficiency as well as the vision of the digital construction site.

Liebherr-Hydraulikbagger GmbH – the Cradle of the Group

In 1949 Hans Liebherr founded the company in Kirchdorf an der Iller in south Germany on the basis of his parent's construction business. The first few decades of the plant were marked by many forward-looking new developments which formed the basis of Liebherr's success story. The many products which originated from the Liebherr plant in Kirchdorf and are now further developed and produced at other production plants of the company prove the high innovative strength of the location.

Today Liebherr-Hydraulikbagger GmbH is one of the world's leading manufacturers of ultramodern hydraulic excavators. The company also develops and manufactures an extensive range of material handlers and articulated dump trucks. The high performing machines are well established in a diverse range of applications for many areas of industry and are deployed all over the world.