U.S. Secretary of Commerce Penny Pritzker presented Bandit Industries Inc. with the President’s “E” Award for Exports at a ceremony in Washington, D.C., on May 16. 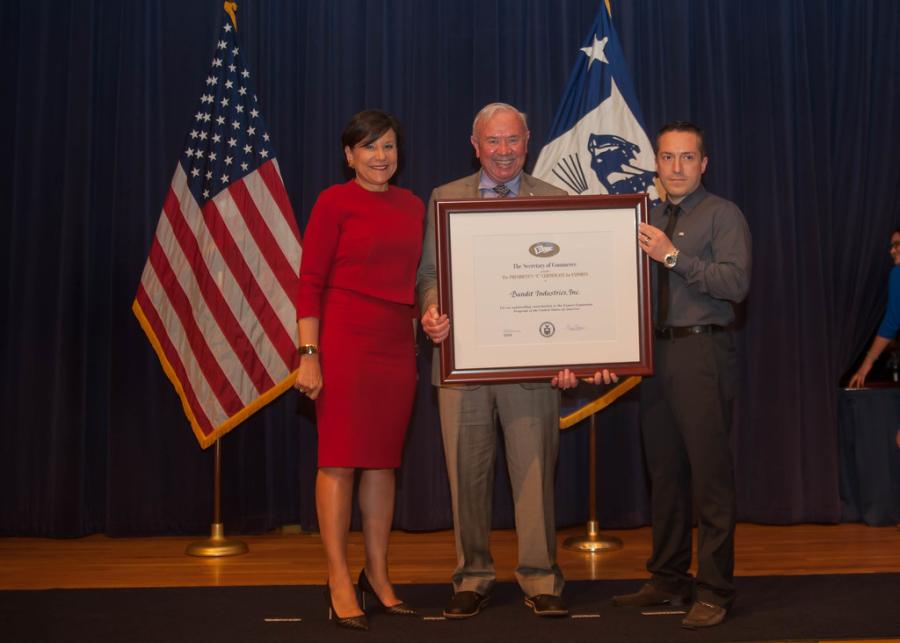 U.S. Secretary of Commerce Penny Pritzker presented Bandit Industries Inc. with the President's “E” Award for Exports at a ceremony in Washington, D.C., on May 16. The President's “E” Award is the highest recognition any U.S. entity can receive for making a significant contribution to the expansion of U.S. exports. This year, 123 awards were presented, with 72 awards going to manufacturers. Bandit Industries President Jerry Morey and International Sales Manager Felipe Tamayo accepted the award for Bandit during the ceremony held in the U.S. Department of Commerce building.

“Exports account for more than 25 percent of our business, and that number continues to grow,” said Bandit Industries President Jerry Morey. “We've always been a manufacturer that listens to our customers and what they need; that's why we've invested significantly into research and development of equipment that meets the special needs of international customers. Our export success is the result of a collaborative effort from everyone at Bandit, from our design engineers to representatives in the field and of course our international sales and marketing team. We are very proud and honored to receive this award on behalf of everyone in our mid-Michigan community.”

Founded in 1983 in rural Isabella County, Mich., between the towns of Mount Pleasant and Remus, the company grew from six employees in a small converted repair shop to more than 400 employees utilizing 280,000 sq. ft. of manufacturing space. All Bandit machines are still built in Isabella County by teams of specialists, utilizing a combination of modern technology and hand assembly. Bandit equipment serves professionals in the logging, tree care, biomass, land clearing, stump grinding, mulch, recycling and renewable energy markets.

In 1961, President Kennedy signed an executive order reviving the World War II “E” symbol of excellence to honor and provide recognition to America's exporters. Today, Pritzker honored 123 U.S. companies with the President's “E” Award for their outstanding work to reduce barriers to foreign markets and to open the door to more trade around the world.

U.S. companies are nominated for the “E” Awards through the Department of Commerce's U.S. Commercial Service office network, located within the Department's International Trade Administration, with offices in 108 U.S. cities and more than 70 countries. Record years of successive export growth and an applicant's demonstration of an innovative international marketing plan that led to the increase in exports is a significant factor in selecting the winners.

For more information about the “E” Awards and the benefits of exporting, visit www.export.gov.