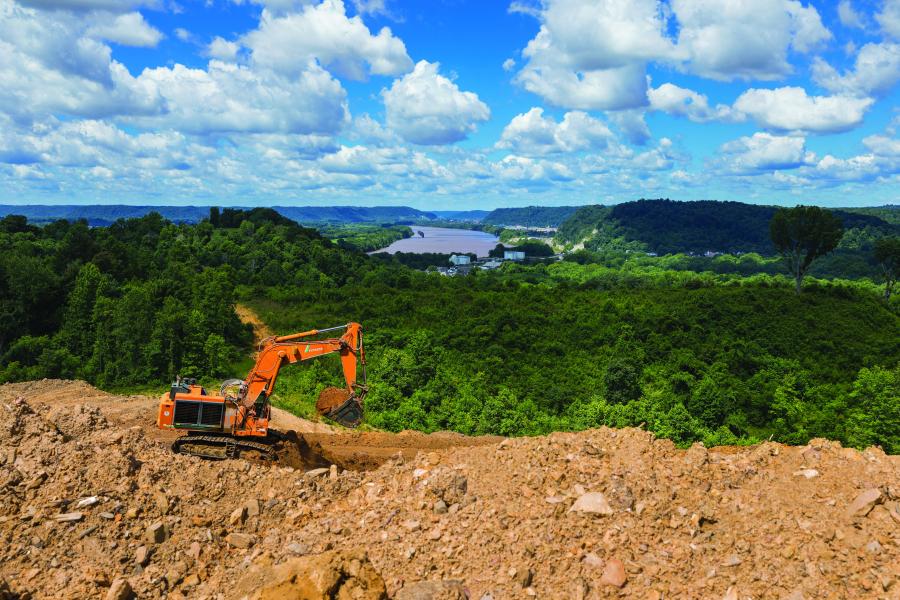 The Beaver Excavating Company is making history by helping complete the Ohio Department of Transportation's (ODOT) massive Southern Ohio Veterans Memorial Highway (State Route 823) project. And they're making it happen in less than four years —three years and eight months, to be exact. Once completed, the highway will bypass approximately 26 mi. of U.S. routes 52 and 23 through the City of Portsmouth in Scioto County.

This project is one for the books. With a $430 million design and construction price tag, it's Ohio's largest project in terms of dollar value and earthwork volume. It's also a design-build-finance-operate-maintain (DBFOM) project set up as a P3 (public-private partnership), which makes it the first of its kind in ODOT history.

ODOT's public-private partner is a group of companies known as the Portsmouth Gateway Group. Additionally, the Beaver Excavating Company, Dragados USA Inc. and The John R. Jurgensen Company formed the Portsmouth Joint Venture (PJV), which is responsible for managing $430 million worth of design and construction aspects of the project.

Established in 1953, Beaver Excavating has grown from humble beginnings to become one of the largest heavy civil and highway infrastructure construction companies in Ohio and the surrounding region.

"Beaver Excavating is family-owned, field-centric and we have a strong safety culture," said Chad Ratkovich, Beaver Excavating project manager. "These attributes make us a good fit for this job. Our success is based on adherence to our company core values and positioning ourselves competitively by partnering with companies that complement our strengths. We're honored to be part of this project."

The numbers don't lie, and Stidd is pleased with the machines' performance.

"When anyone asks my opinion on production machines, my first choice and suggestion is always going to be Hitachi due to the production, longevity and the overall brand," Stidd said.

It's important to mention that the project's "earthmoving" consists of 97 percent rock — sandstone, shale and limestone — that must be blasted every day. Beaver Excavating also is making cuts as deep as 200 ft. and using the material for fill on other parts of the project.

"We're blasting every day — sometimes twice a day —and that takes a lot of coordination," Johnson said. "You get into a rhythm, ramp up production and then you might hit a roadblock. The important thing is how you react to that to keep the project moving."

Life in the Fast Line

Initially, ODOT planned for the bypass to be a traditional, three-phase project. However, the plan changed when the P3 option became available.

"The P3 option of delivering all 16 miles of roadway as a single-phase project opened up due to legislation, and it accelerated the project timeline by 17 years," Ratkovich said.

According to Beaver Excavating, the bypass will complete the Appalachian Highway system in Ohio and reduce the current 26-mi. travel time (using U.S. routes 52 and 23 through Portsmouth) by avoiding 30 traffic signals, 80 intersections and 500 driveways. Using the new highway, ODOT estimates a travel time savings of 16 minutes.

Beaver Excavating started the project in June 2015 and anticipates completion at the end of 2018. And Stidd said the company's Hitachi excavators will continue to be a major part of crossing the finish line.

"Hitachi has played a huge role on the largest earthmoving project in Ohio," Stidd said. "The productivity and durability of the machines has kept the project on pace. Hitachi gets the job done."

Project at a Glance:

(This story was reprinted with permission from Hitachi Breakout Magazine, Fall 2017 issue.)