The crews didn’t exactly blow up the truss bridges, but rather set the charges and dropped them straight down. 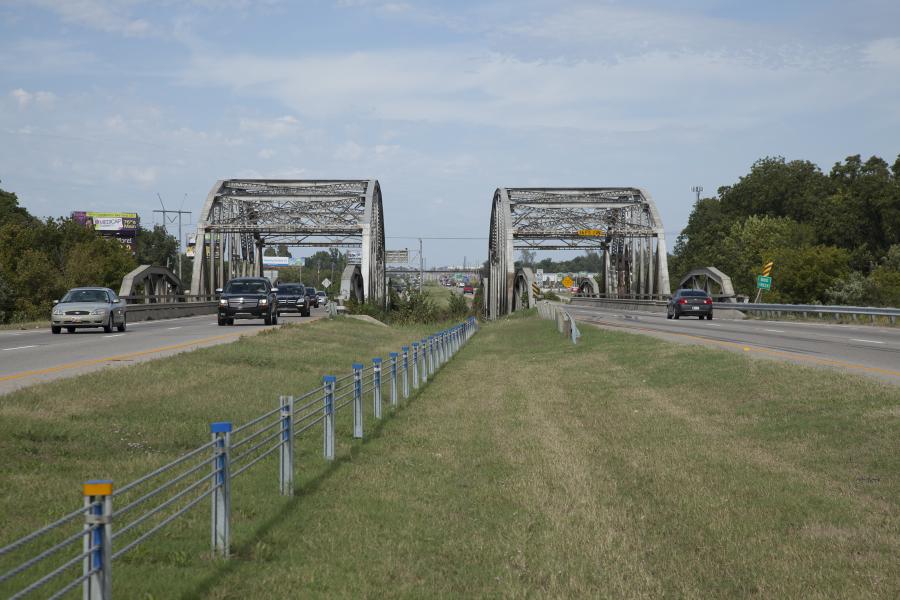 Construction crews recently demolished the last of eight bridges as part of a $45 million Oklahoma Department of Transportation project to expand U.S. 169 in Owasso. The expansion, which stretches 1 mi. (1.6 km) from 56th Street North to 66th Street North, will open the highway from four lanes in each direction to six.

Becco Contractors Inc. of Tulsa won the bid for the job and began work in July 2015. It included the removal of two truss bridges over Bird Creek originally built in 1960.

“The Bird Creek bridges were in very poor condition,” said ODOT construction engineer Mark Zishka. “We had to regularly go out and make repairs on the trusses. They were high maintenance bridges that we wanted to get off the system as soon as possible. Our maintenance crews were doing maintenance and often it came right before rush hour and created a lot of problems for commuters.”

The crews didn't exactly blow up the truss bridges, but rather set the charges and dropped them straight down. The tricky part came in getting the charges set just right, Zishka said.

“We have the two southbound bridges built and half of the northbound bridges,” he said. “There wasn't much room for error. If the charges hadn't been set correctly they could have fallen into the new bridges.”

An earlier bridge demolition took place last December and went off without a hitch.

Traffic in the most recent demolition on Bird Creek was shut down for only 15 minutes. It took place on a Sunday morning when traffic volume was low, Carmon said.

The other six bridges were not truss bridges, but also were high maintenance and/or structurally deficient, and were demolished by using heavy equipment to lift off the concrete deck and beams. Other equipment on the job includes cranes for the bridgework, earthmoving equipment and asphalt pavers.

The biggest trial in completing the project is keeping the traffic flowing, Zishka said.

“We basically set it up to maintain two lanes of traffic in each direction during construction, and to build the different phases in a way that allows up to keep two lanes of traffic moving. The average daily traffic is 58,000 vehicles a day. For a four-lane highway, that's a lot of traffic. We get a lot of congestion in the morning. We have six lanes to the south that we finished five years ago to increase capacity. We're slowly moving north into the Owasso area, which is where the commuter traffic comes from.”

Keeping traffic flowing smoothly is something of a “puzzle,” Carmon said. “We have to remove a little bit here and there in order to put it all back together. So we're making really good progress right now with getting this last bit of the old out and being able to put the new in place.”

The project is progressing as expected with some portions even ahead of schedule, Zishka said.

“These new bridges will carry six lanes in each direction,” he said. “The northbound Bird Creek bridge carries the 56th Street onramp and creates a safer merge. Previously, it was a tight squeeze to try to merge. Commuters will definitely appreciate the new bridges.”

The project is set for completion in by spring 2017.