Edwin McCain will be interacting with customers and performing at various events, but he also can speak on the company's equipment due to his experience in the field. 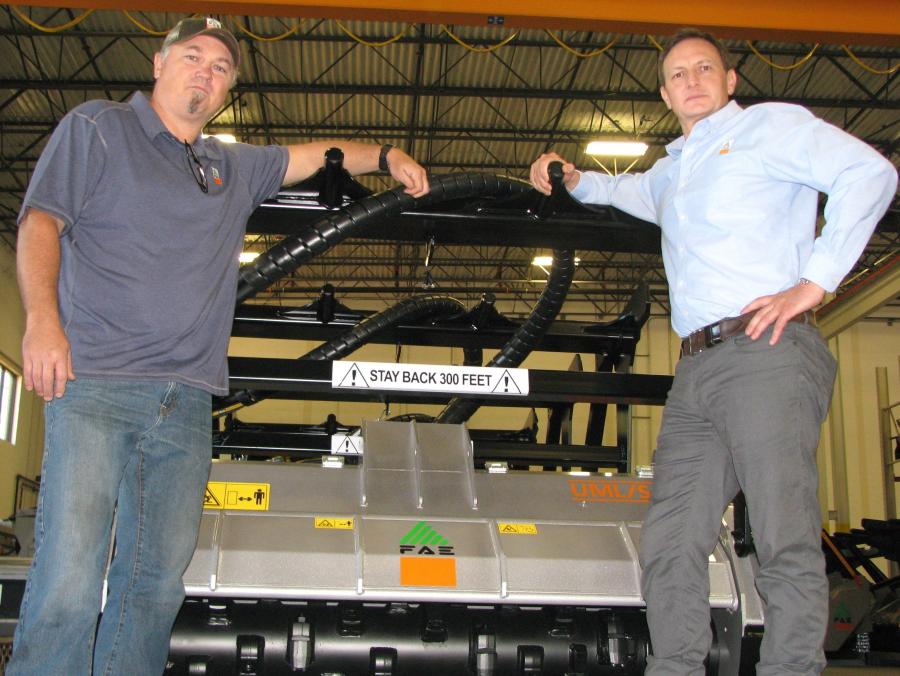 Edwin McCain (L) and Giorgio Carera look over the new mulching heads, like the ones that McCain uses in his own business, at the warehouse facility of FAE USA in Georgia.

FAE USA, Inc., located in Flowery Branch, Ga., announced they have selected singer/songwriter Edwin McCain as their spokesman. FAE USA is the U.S. subsidiary of FAE Group, a manufacturer of machinery for land clearing, road construction, agricultural and forestry applications.

“We partnered with Edwin McCain not only because he is a well-known musician, but also for his knowledge of the land clearing business and our equipment,” said Giorgio Carera, FAE USA's CEO. “FAE looks forward to growing our partnership with Edwin in the years to come.”

The partnership came about after musician Francisco Vidal, a mutual friend of Carera and McCain, reached out to McCain about using his music for a promotional video for FAE. McCain said he was interested in the idea, but said he wanted to do more

“I do forestry mulching, so I sent him [Carera] a picture of my machine. I said, 'I would be happy to do the music, but I would also love to be the spokesman for your equipment.' That's how the conversation started. Giorgio came to a show in Atlanta and we met and hung out, and that's how the relationship was born. I'm a huge fan,” said McCain.

McCain's unique background will serve him well in his new role. He will be interacting with customers and performing at various events, but he also can speak on the company's equipment due to his experience in the field. His expertise also makes him an invaluable asset during equipment demos.

McCain has friends in the road construction business and during a conversation with one in particular, he thought it would be a good idea to set up an FAE demo with him. “The contractor has asphalt grinders, which require the teeth to be changed out frequently, whereas the teeth on the FAE machines seem to last much longer. I thought he would be really excited to hear that,” said McCain

He also will be assisting the company on social media. In addition to the initial promotional video announcing the partnership, McCain will also be shooting videos from various projects he's working on, which will appear on FAE's website.

McCain stated he “noticed YouTube is helpful for people who want to get into the business. Some of the best videos I've seen are from contractors who not only discuss the job, but talk about the struggles they're enduring and the philosophy they have for overcoming them. I'm fascinated with that part of social media because I think it promotes a better experience overall.”

McCain said another motivating factor in his decision to become the company's new spokesman was the quality of the products and the people who work there.

“Part of it is the excellence of the engineering. I wouldn't jump in on something unless I knew it was at the top end in the range. Also, it's an adventure. This is something I've never done, and I'm always up for a new challenge. When I met Giorgio, Lee Smith and everyone there, I knew I wanted to work with them. That was all it took. That and the fact that it is the greatest mulcher head I ever run in my life. It all made sense.”

McCain's introduction to the forestry mulching industry came around eight years ago. He was part of a group that owned land in Mt. Pleasant, S.C., but during the recession, his partners had to bail out. The land was overgrown and needed to be cleared, so he rented a forestry machine and over the course of two days cleared the land himself.

“Halfway through the first day of running the machine I said I'm eventually going to own one and now five years later I own a 2007 Terex PT100 forestry machine,” said McCain.

Today, he still owns the same machine, but it is equipped with a FAE mulching head. He's still buying land and clearing it, but he also has contracts with commercial real estate companies as well as private owners.

It is his hope to be able to pass along his business to his three children.

“I want them to see me working, and I want to build something they can take over someday. It's always been about building a business that they can carry on if they choose. With music, it's not quite that simple; you can't just hand over the business,” said McCain.

“I enjoy this as much as I enjoy playing music. I know that sounds strange. A lot of what happens when I'm traveling and playing music — the two hours that I'm on stage — are absolutely special, but the rest of the time is just sitting around in an airport, in a car or in a hotel room. I don't really like sitting around. I like to be productive. This is the perfect antidote to all the sitting around.”

For almost 30 years, FAE has been offering a wide range of mulchers, tillers, stone crushers and ground stabilizers. These products are provided in three lines intended for different applications, including: Land Clearing — for cleaning and maintenance of green, agricultural and forest areas for deforestation and reclamation; Construction — for the construction of roads, motorways, and other infrastructure; and Prime Tech — the range of special FAE machinery and tracked equipment carriers to obtain excellent results in the most difficult conditions.