Colorado State's Field Made With Big Time in Mind 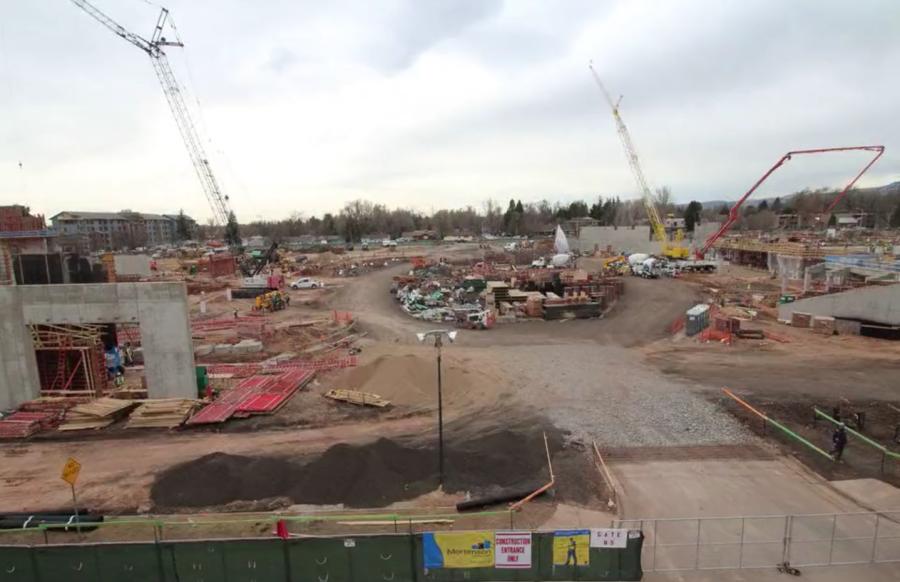 In six months, the hard hats will be gone, and in their place will be a completed $220 million stadium and football headquarters, complete with luxury suites

The snow-covered construction site is thousands of miles and more than a few degrees removed from the national-title game.

In six months, though, the hard hats will be gone, and in their place will be a completed $220 million stadium and football headquarters, complete with luxury suites, a 50-by-84-ft. (15-by-25.6 m) videoboard and a 9,100-sq.-ft. (845 sq m) weight room, all of which can only lead to one conclusion: Colorado State is aiming for the big-time.

CSU is one of a handful of schools that have recently committed major resources to either improving or building new football facilities on campus. The projects are part of a complicated dance in which universities utilize sports to increase their public profile. They undertake the expansions with the hope that someday there might be a spot waiting for them in one of the nation's biggest — and richest — conferences.

"We have all the ingredients to be successful within our current peer group," said Rams athletic director Joe Parker, whose program now resides in the Mountain West, one of the "Group of Five" conferences that are mostly outside looking in when it comes to the season's biggest bowl games. "We can be as successful as any program within the Group of Five and, who knows, the way things go, maybe you can take yourself beyond that."

This time of year, of course, belongs to the biggest of the big.

The four-team playoff and the major bowl games — Orange, Rose, Sugar, Cotton, Fiesta — are almost exclusively the domain of the Power 5, the Southeastern, Big Ten, Pac-12, Big 12 and Atlantic Coast Conferences. Only one slot in those games is guaranteed for schools in CSU's category.

But with stadiums the likes of which are going up on campus in Fort Collins, a burgeoning city of 160,000 about 80 minutes north of both Denver and Boulder, where Pac-12 member University of Colorado resides, schools like Colorado State are trying to make themselves harder for the big boys to ignore.

Last year, the Big 12 spoke with 11 Group of Five schools, including Colorado State and Tulane — which recently opened its own on-campus stadium — about a possible expansion. In the end, the conference took none of the candidates, and stuck with 10 teams. But the continuing bursts of realignment that have reshaped college sports over the past two decades suggest that the status-quo won't last forever.

"I think it was a healthy exercise," Parker said. "It was one that helped us understand who we are at this moment in time. For us, we want to continue to be well-positioned for any future conversations that take place with the Big 12 or anyone who wants to visit about what the future should look like."

And if FAU, CSU, Tulane or some other school moves up, then a program like Coastal Carolina has positioned itself to fill that void.

The South Carolina school pulled a stunner last year by winning the College World Series; it already boasts a basketball team that makes semi-regular appearances in the NCAA Tournament.

Last year, Coastal Carolina announced plans to move from the Big South to the Sun Belt Conference — a member of the Group of Five — which brings with it a move from what had been known as Division I-AA and into big-time football. That transition will include a $32 million stadium expansion to bring attendance to 20,000.

"We're in an area that's growing," athletic director Matt Hogue said. "It really makes sense to align what we're doing with our athletic program and that growth."

While Hogue, Parker and most like them are fine working within the system, Group of Five AD Sean Frazier sees a need for something else. Frazier, of Northern Illinois, told ESPN it might be time to consider a Group of Five playoff. No school outside the Power 5 has won a national title since BYU in 1984, and Frazier said the idea that another can break through is "a flat-out lie."

Parker said he wasn't on board with what he called a "football-centric" idea.

"For me, it's, let's continue to step to the plate [in the current system] and take swings," he said.

The new football complex figures to only bolster CSU's standing — among recruits, to say nothing of possible conference partners down the road.

Set for completion this summer, it is situated across the street from Newsom and Aylesworth residence halls, built on land that was long used for research gardens — a hallmark of the land-grant university that started in the 1800s as an agricultural college.

The stadium's 23 luxury suites sold out quickly, along with the rest of the nearly 2,000-seat inventory of loge boxes and club seating.

It will have about 36,500 seats with room for 5,000 more standing-room fans in a wide-open concourse that wraps around three-quarters of the stadium.

And, for those wondering, the stadium could be expanded, with possibilities for an upper deck on the south and east sides.

"Obviously, those things come at a cost," Parker said.

A big piece of that cost could be covered from a move in conferences. Currently, the biggest conferences get about $55 million each from the playoff system, for an average of around $5 million per school. But bowl money is only one sliver of the pie. For instance, the Southeastern Conference brings in around $350 million a year in TV money, while Group of Five TV contracts generally produce annual revenue in the low eight figures.

That conversation is for the future — though the hope is that future may not be far down the road.

"I've been on a lot of Power Five campuses," Parker said. "And I'd put this one up against any of them as far as the feel of the place and the quality of the people."—AP