According to a 2009 Government accountability report, pedestrian fencing has run anywhere from $400,000 to $15.1 million per mile. 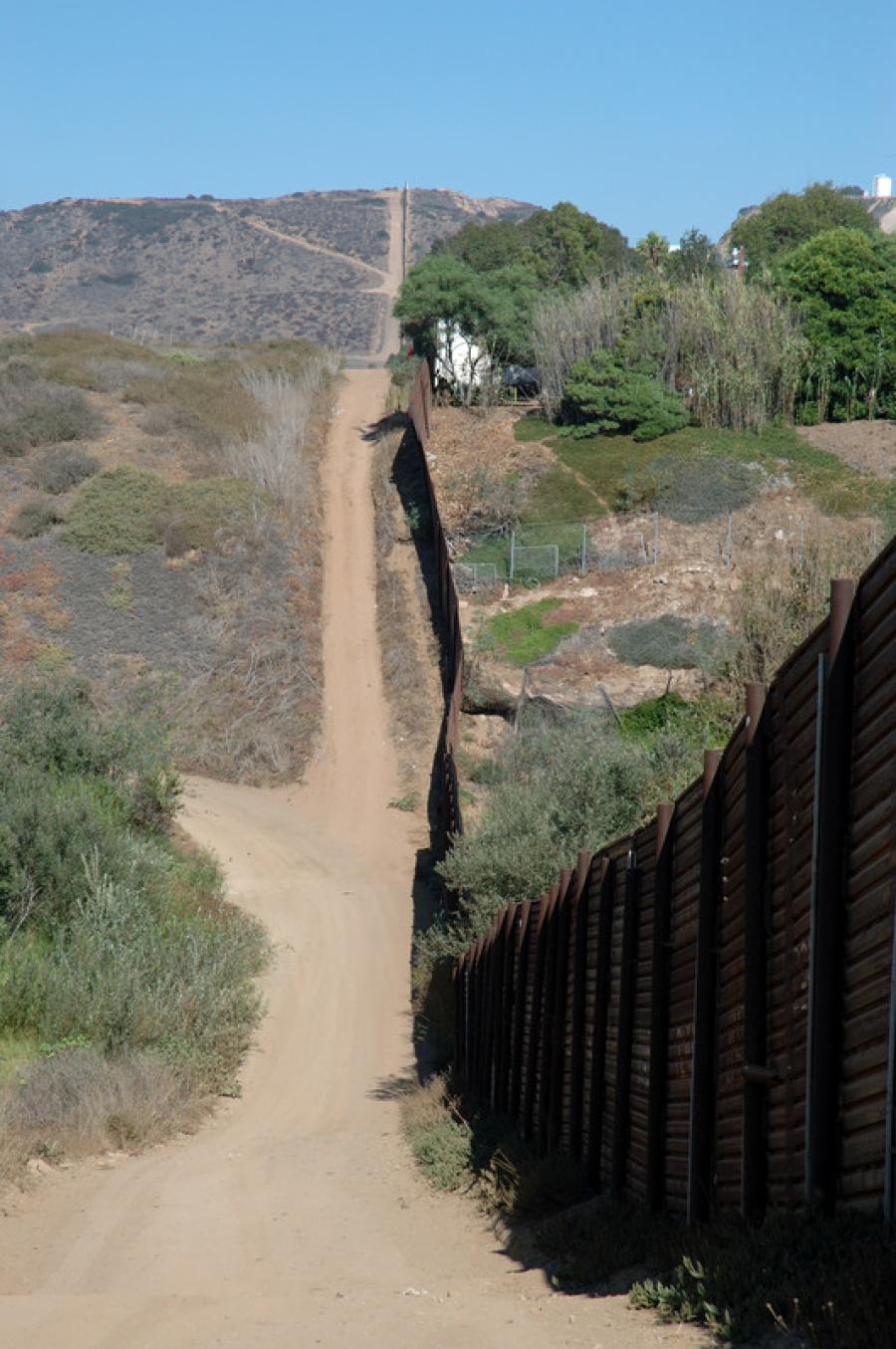 According to a 2009 Government accountability report, pedestrian fencing has run anywhere from $400,000 to $15.1 million per mile.

BROWNSVILLE, Texas (AP) Close to the southern tip of Texas a border wall suddenly ends. Its final post sits in a dry cornfield half a mile from the nearest bend in the Rio Grande river, the actual border with Mexico.

It would be easy to walk around it. Tires left by the border patrol rest nearby. Agents drag them behind trucks to smooth the cracked earth and check for footprints.

Unlike other famous barriers in history such as the Berlin Wall or the Great Wall of China, the U.S. version is not much of a wall. What stands in Texas is a fragmented series of fencing, composed of enormous steel bars embedded in concrete close together. The rust-colored thick bars that must reach a height of 18 ft. loom over the landscape, forming teeth-like slats that split farmland, slice through backyards, and sever parks and nature preserves.

There are miles of gaps between segments and openings in the fence itself. As a result of the Secure Fence Act passed in 2006, the government built some 650 mi. of wall along the 1,954-mi. U.S.-Mexico boundary. While 1,254 mi. of that border is in Texas, the state has only some 100 mi. of wall.

Republican presidential candidates insist they'll finish it. But completing the Texas part of the wall would be a daunting task due to the border's sheer length, the fact that it sits in the center of the snaking Rio Grande, and because treaties with Mexico prevent either country from constructing within the river's flood plains. And unlike in other southwestern states, most border land in Texas is privately owned.

Finishing the some 1,300 mi. of border fencing also would be costly. According to a 2009 Government accountability report, pedestrian fencing, meant to keep out smugglers and migrants crossing on foot, has run anywhere from $400,000 to $15.1 million per mile, averaging $3.9 million. More recent construction has been even more expensive, with segments constructed in 2008 costing $6.5 million per mile. If kept at this rate, the wall would cost nearly $10 billion to complete just for materials, and challenging geography could bring it much higher.

“With every twist and turn of the Rio Grande and every steep terrain in Arizona, it would cost easily that much,' said Adam Isacson, a border expert of the Washington Office on Latin America.

Officials overseeing the wall's construction faced a legal and logistical nightmare from the start, according to emails obtained under the Freedom of Information Act and litigation by Denise Gilman, a law professor at the University of Texas. The hundreds of emails, which Gilman shared with The Associated Press, show that from the planning phase some 65 mi. of the proposed route sat a half mile to a mile from the border, making it not a true border wall.

Officials struggled to find places where construction could start fast to meet Congress' deadline of building 255 mi. by December 2008. They sought contingency fencing that did not require “significant real estate acquisitions' or cut through sensitive wilderness, the emails show. Wealthy landowners demanded more compensation or refused to allow construction.

Hundreds of property owners were sued just to build the existing chunks of wall. Some 400 relinquished properties ranging in size from a driveway to commercial lots and farms, costing the government at least $15 million, according to an AP review of land cases in 2012.

Among them was Eloisa Tamez, who refused to cede her three acres in San Benito, land that had been in her family for generations. A federal judge ruled in the government's favor, and Tamez was compensated $56,000, with which she funded a scholarship at the University of Texas Rio Grande Valley where she works as a professor.

“It might be just a little piece of land,' she said. “But to me it meant my life.'

The Rio Grande Valley is home to 54 mi. of wall, and the official name of the border barrier there is Pedestrian Fence 255. The area is the major crossing point for tens of thousands of families and unaccompanied children, many fleeing gang violence in Guatemala, El Salvador and Honduras. The surge that began last year resumed in recent months, and Gov. Greg Abbott extended the Texas National Guard border patrol deployment in response to more than 10,000 unaccompanied children crossing into the United States in October and November.

Some residents have found themselves cut off by the wall.

Pamela Taylor, who lives near Brownsville, originally fought the wall's construction. Now her Texas home sits behind the wall on the side facing Mexico.

She still leaves coolers of water for thirsty migrants, though she wishes more of them would come to the United States legally, the way she emigrated from England.

The wall “doesn't do any good. It's a waste of money,' she said. But she's gotten used to it.

Some locals say it's better than nothing.

Othal E. Brand Jr., the president of the Hidalgo County Water District 3, which supplies water to the McAllen area, pointed out where the fence separated a 20-acre reservoir from two pumping stations, which sit behind it along a bend in the Rio Grande. Brand said this land, adjacent to a wilderness reserve, was for years overrun by nighttime crossers and that smugglers threatened and even shot at his employees.

“The wall is only part of the solution,' he said, “but it's an important part.'