The history of one of the most common pieces of construction equipment dates back to 1835. 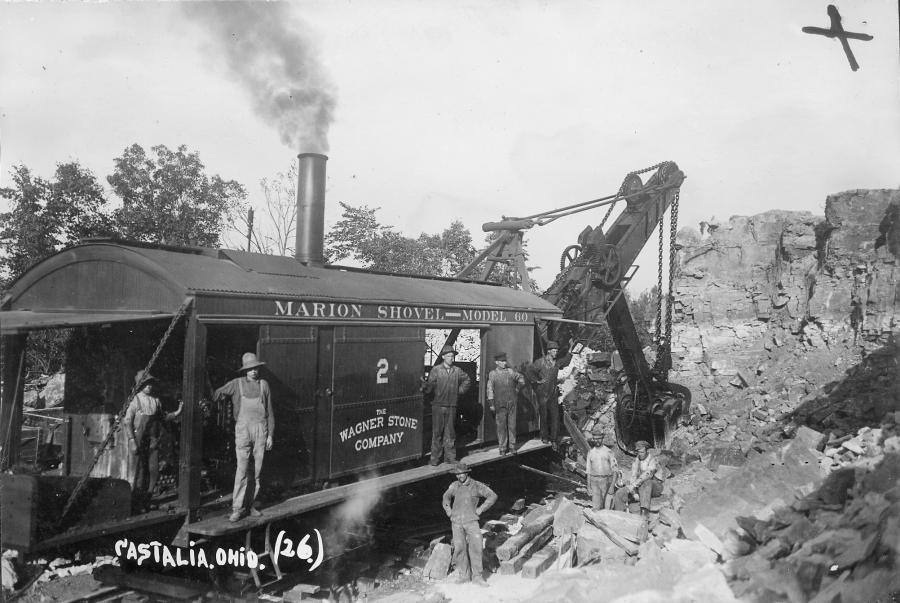 In 1835, the steam-powered dipper shovel was created and used to dig through hard soil and rocks in mines. (drc.ohiolink.edu/ photo)

The backhoe loader is one of the most common pieces of construction equipment. In essence, it is a tractor-like vehicle with a bucket mounted on one side and a small, hydraulic digger (backhoe) on the opposing side. The arm is connected to a boom and secured with a king post, which allows the boom to pivot 180 to 200 degrees.

Its versatility enables it to perform many tasks in almost any terrain. The backhoe loader is commonly used on projects to dig trenches for cable lines, pipes and utility lines. Other uses include demolition of small structures, landscaping, digging holes, breaking asphalt and transporting some construction materials.

In 1835, the steam-powered dipper shovel was created and used to dig through hard soil and rocks in mines. It would then load the excavated material onto railroad cars. Since the dipper shovel was rail-mounted, it was able to be moved easily from location to location. It had a short boom with a shovel and a bucket, used for digging. 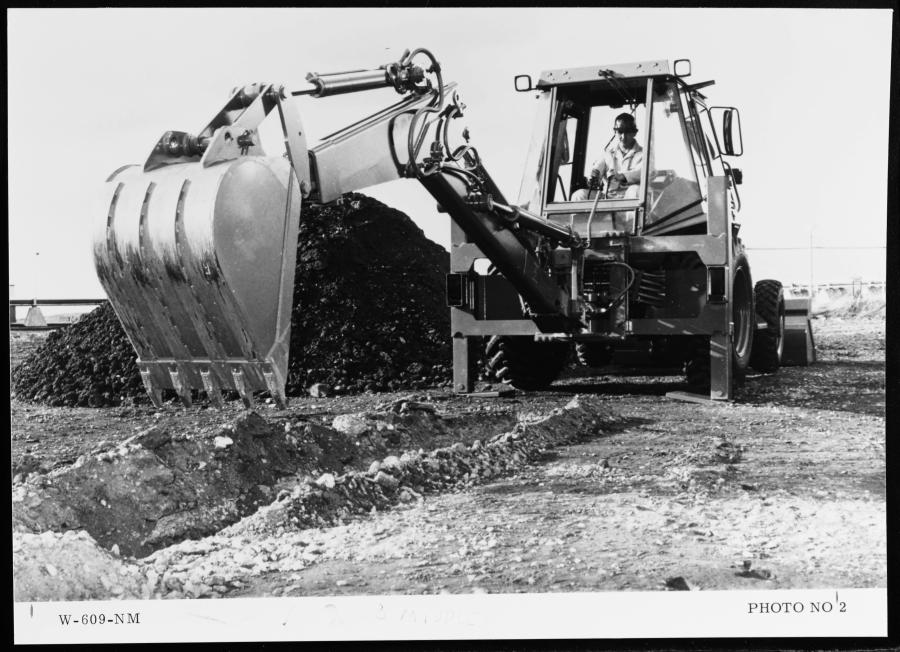 The modern backhoe loader has a similar history in both the United States and the United Kingdom. In 1945, following World War II, construction projects skyrocketed in both countries. It was common for builders to use tractors with various attachments, but with the housing boom, there was a call for equipment to be made more efficient and able to accommodate the types of attachments needed for the job.

In 1947, the first all-hydraulic backhoe swing frame was developed by Vaino J. Holopainen and Roy Handy of the Wain-Roy corporation of Hubbardston, Mass. The swing frame allowed the digging arm to swing to the side and dump the contents of the bucket. It was mounted to a Ford model 8N tractor. In 1948, the first units were sold to the Connecticut Light and Power Company for $705. Wain-Roy sold approximately 7,000 units between 1948 and 1957, mostly through Ford dealers.

Joseph Cyril Bamford started his business — J.C. Bamford Ltd. — in 1945 in Uttoxeter, Staffordshire, England. JCB Inc., as it is known today, began by creating two, then four-wheel trailers. In 1948, he created a hydraulic front loader, designed to bolt to a Fordson “Major” tractor, thus creating the Major loader.

By 1953, JCB launched what the world now knows as the backhoe loader by fitting both the hydraulic backhoe and the loader to the same tractor. Due to its popularity, the machine is still known as a “JCB” in the United Kingdom and Ireland.

Wain-Roy created the first reversible seat and then in 1954, filed a patent for the first individually-controlled outriggers. The outriggers are used to stabilize the machine and keep the weight balanced so it does not tip over.

In 1957, Elton Long, an engineer at Case Construction Equipment, was given the task to develop an integrated loader/backhoe following the company's acquisition of American Tractor Corporation. By early spring, Case introduced the first machine made and warranted by one company.

Also in 1957, JCB launched the first dedicated backhoe loader, with both the loader and the backhoe permanently attached to the chassis. This makes the machine more stable, rather than simply being attachments for tractors. This model, known as the Hydra-Digga, also provided a comfortable cab for the operator.

Case improved upon its design by introducing the first diesel-powered loader/backhoe in 1959, and in 1963, the 530 Construction King was available with power loader linkage and two-cylinder, double-acting swing system with hydraulic cushion.

An American company — Hy-Dynamic — brought the Dynahoe Model A to market in 1959. This machine was the second purpose-built backhoe loader and was intended for heavy excavation jobs. It offered a 14,000 lb. (6,350 kg) operating weight; 14 ft. (4.3 m) dig depth; and was powered by a 65 hp Continental flat-head “Red Seal” 6-cylinder gas engine. In 1961, the Dynahoe was available with a Diesel 353 engine and by 1964 the gasoline engine was phased out entirely. 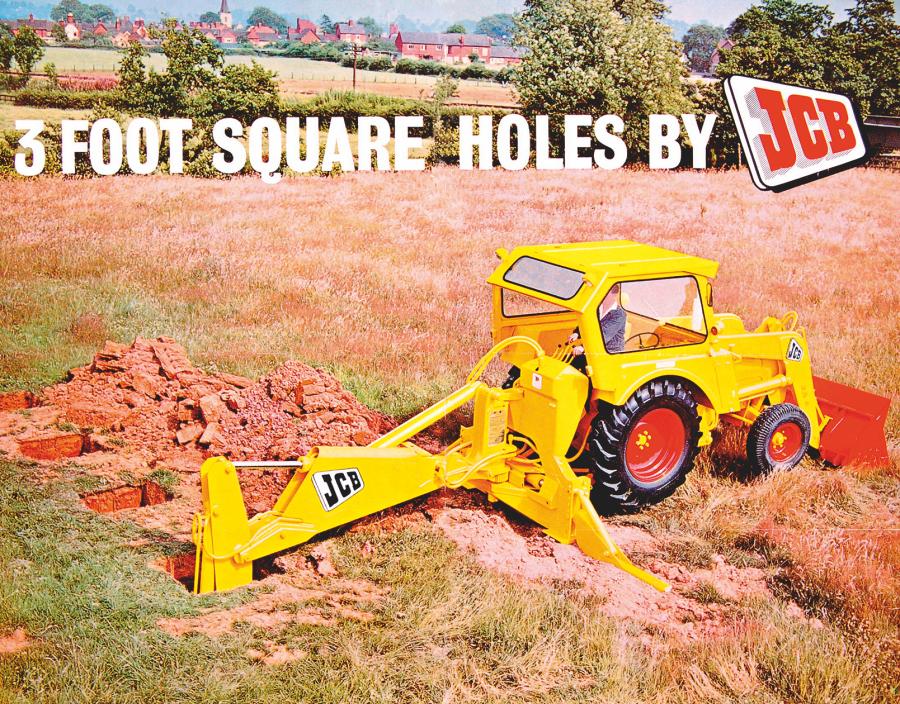 In the 1960s, the first JCB unit was introduced to the American market. The JCB 4C was a powerful machine with the capability of digging through rock. In 1966, the company launched the larger, heavier 3D backhoe loader. This piece was able to rotate 360 degrees.

Case also made continuing improvements, including buckets up to 38 in. (96.5 cm); self-leveling buckets; and an improved swing mechanism. In 1967, the company introduced the first extendible boom, allowing the backhoe to have greater reach. 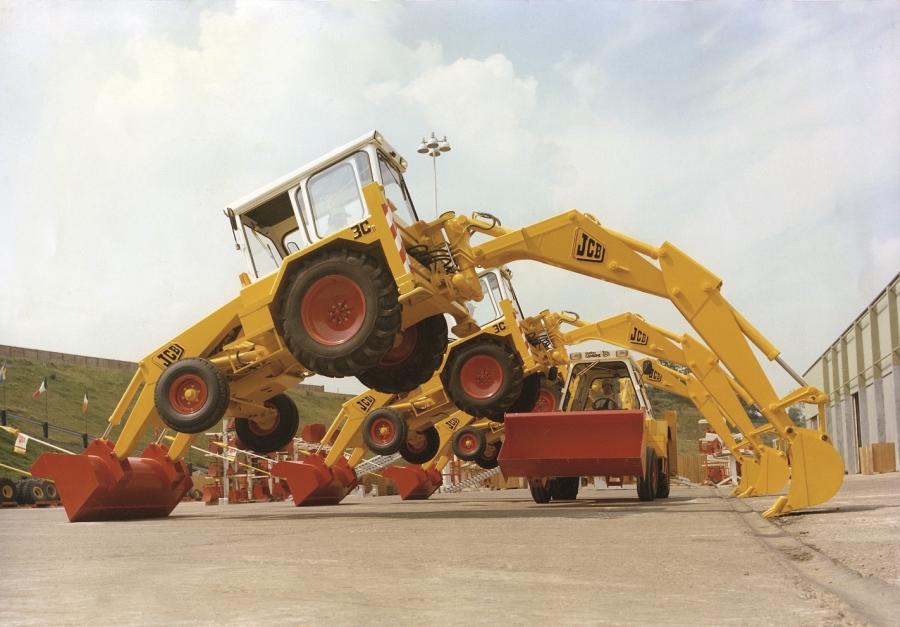 Backhoe loaders come in many different sizes, including compact models for jobs requiring work in a tighter space.