Construction of New I-64 Bridges at Nitro, W.V., About to Begin 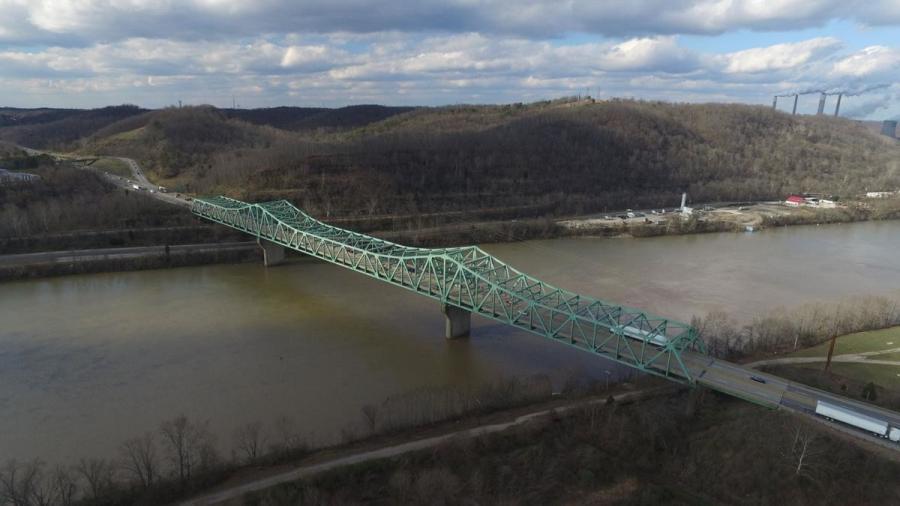 The Interstate 64 bottleneck over the Kanawha River at Nitro, W.V., could be relieved in about three years.

Construction is to begin soon on a new westbound traffic bridge alongside the existing structure. When completed, the current bridge will be removed and replaced with another new bridge for eastbound traffic.

It's a welcome development, as congestion through the area is inevitable. At times, I-64 from Nitro to Cross Lanes is West Virginia's largest parking lot.

Last fall, the West Virginia Department of Transportation (WVDOT) awarded a design-build contract for the new bridges and the expanded I-64 to a joint venture of Brayman Construction and Trumbull Construction for $224.4 million. Both building corporations are based in Pittsburgh, Pa.

"We are anticipating a fall start date for the construction," Travis Knighton, head of the WVDOT's Division of Highways District 1, said in an interview.

Work will start with Kanawha River access being built so equipment can get in the waterway and begin work on new piers for the westbound bridge, he added.

Soon after, work will begin on improvements to the St. Albans interchange.

Some plans have changed. Instead of building a new bridge and renovating the older structure, as was initial designed, the old one will now be replaced, too, Knighton said. Both new spans will be of a steel plate girder design like the Dick Henderson Bridge at St. Albans, he added.

Once the new westbound bridge is completed, traffic will be shifted onto it while the old bridge is removed and a new one built for eastbound traffic.

As the JV crews are performing that project, 3.8 mi. of I-64 between Nitro and Scott Depot will be widened. All this work — two bridges and the widened highway — is scheduled for completion by October 2023.

The existing I-64 bridge is a chokepoint for traffic, and it has been for years. People who travel the area frequently, particularly at rush hour, have come to expect congestion. Heading east from Huntington toward Charleston, drivers must deal with traffic entering from the right with a very short lane for merging.

The problem is worse for motorists driving westbound, where three high-speed lanes of traffic are reduced to two at the Nitro exit. They must also deal with traffic entering from Nitro, again with a short ramp for merging.

So, any highway with three high-speed lanes merging into two with inadequate space on a roadway where traffic routinely moves at 80 mph or more is in dire need of an upgrade.

Even in times of light traffic, alertness is called for as accidents are not uncommon.

The I-64 work over the Kanawha River will be a sight to see, with tall piers being placed in the river and a new open-air bridge — without the usual steel beams or cables — going up. Then travelers will see an old bridge demolished and replaced.

When everything is done, the chokepoint should be gone and entering and exiting I-64 in that area will be safer.

Building two new bridges and widening almost 4 mi. of interstate highway in a three-year period is an ambitious schedule. The westbound bridge is scheduled to be finished next year.