Constructors Inc. Works to Give Lincoln an Edge

The addition of roundabouts will change the look and feel along the roadway. 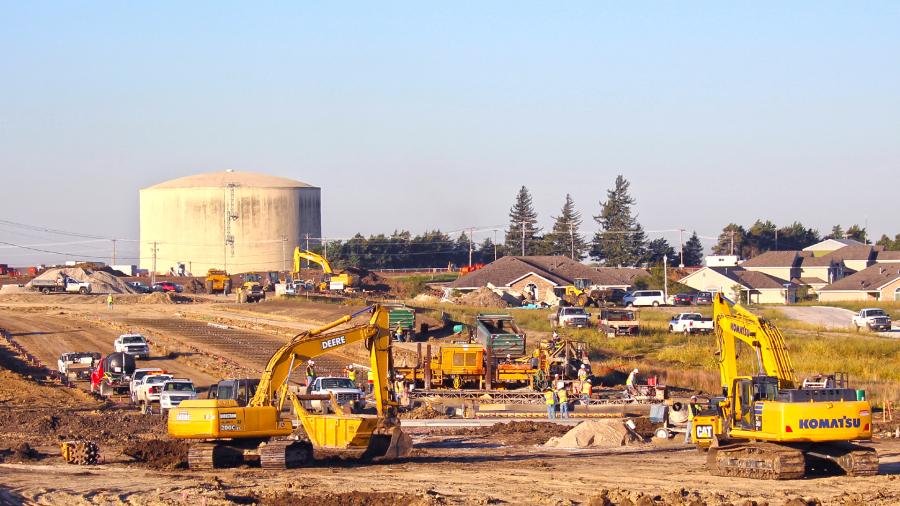 Work on the widening and upgrading of Yankee Hill Road in Lincoln, Neb., is expected to be completed in August 2017 as crews from Constructors Inc. are engaged in two separate projects for the road — Yankee Hill from 70th to 81st and 81st to Highway 2.

Work on the widening and upgrading of Yankee Hill Road in Lincoln, Neb., is expected to be completed in August 2017 as crews from Constructors Inc. are engaged in two separate projects for the road — Yankee Hill from 70th to 81st and 81st to Highway 2.

The work started in April and is on schedule. The current non-paved road has one lane in each direction.

These projects are more than about building roads as the city, anticipating growth along the corridor, including the construction of schools, is keen to prepare the road network in advance and have the utility infrastructure in place for the new development.

The project includes paving Yankee Hill from 70th to Highway 2, widening it to four lanes between Sutherland Street and Highway 2, and building roundabouts at the quarter-mile, half-mile and mile intersections.

To prepare the groundwork, the city's Public Works department conducted direct engagement with property owners along the project corridor in 2014 to gain their input for the engineering design process, which allowed the city's project managers to be fully aware of the priorities and sensitivities that they have with the project and to ensure that all issues have been thoroughly addressed. Easements and property access were the top priorities of property owners.

“The project focused on a community informed design,” said Erin Sokolik, the city's project engineer, who is involved with the section between 81st to Highway 2. “Property owners asked for knowledge of full right-of-way boundaries to re-landscape properties, slowing down traffic and implementing traffic calming measures along Yankee Hill Road and the importance of pedestrian and bike paths.

“We will have enhanced safety and traffic flow with the completed project,” she added. “Roundabouts enable quicker and continuous movement through intersections and reduce the significance and extent of crash potential. Yankee Hill will be completely graded for a future four-lane cross section build out between 70th and Sutherland. This will alleviate the need to impact the adjacent properties in the future.”

Danielle Vachal, the city's project engineer who is involved in the section between 70th and 81st streets, stressed the need for preparing the road network for the expanding district.

“Continued growth and projected new schools in the southeastern edge of the city are driving the need for the project,” she said. “These future volumes were taken into consideration when evaluating the number of lanes and roundabout locations along Yankee Hill.”

The addition of roundabouts will change the look and feel along the roadway.

“This represents serious growth for the city,” said Vachal. “As the city grows, new roads must be built to meet the projected needs of growing areas. LPlan2040 is the Lincoln-Lancaster County 2040 Comprehensive Plan. Adopted in 2011, it outlines where, how and when the community intends to grow. The LPlan2040 was coordinated with the formulation of the Long Range Transportation Plan, which provides the blueprint for the area's transportation planning process over the next 30 years. As new schools and community facilities are built, roadway and trail networks must be built to provide safe and efficient connectivity.”

The Yankee Hill Road construction project will be complete when the middle school near 84th and Yankee Hill opens for the 2017 to 2018 school year and it is expected that new homes and other economic development will continue long after that.

More and more cities across the country have been embracing the use of roundabouts, with Lincoln having adopted their use 13 years ago.

“The construction of modern roundabouts in Lincoln began in 2002,” said Sokolik, “and they continue to be a preferred intersection option within the city of Lincoln. Studies have shown that they result in an overall reduction in the number of crashes and crash severity, including pedestrian related crashes. An additional benefit is that they provide shorter pedestrian crossing distances. They also provide for greater roadway capacity with fewer delays which in turn reduces fuel consumption and decreases emissions. They also lower lifecycle costs for infrastructure and improve aesthetics.”

With only several more months to go, solid progress is being made.

Thus far crews have completed the 84th Street roundabout, removals of existing pavement, 50 percent of the storm sewer, a 28 by 8 ft. double box culvert, relocation of all utilities — overhead utilities were relocated underground outside of the roadway, removal of all trees, construction of the retaining walls, and 40 percent of all roadway paving.

The remaining work will see the construction of the remaining 60 percent of roadway paving; a storm sewer —including pipes, inlets and culvert pipes; watermain construction; four roundabouts; sidewalks; street lighting installation; and final grading and seeding.

“Most of the work was shut down over the winter but mild temperatures allowed for work to continue on the storm sewer and other electrical work,” said Jess Sundeen, the city's construction project manager. “As with many projects, coordination between the contractors and utility relocation is always an issue. Weekly meetings on site helped kept the communication open.”

This new roadway will access the new school and YMCA location.

“Since much of the existing roadway was unpaved rural section with open ditches,” said Sundeen, “there was very little storm sewer. The general contractor will be installing 12,880 feet of reinforced concrete pipe.”

The lifespan of the new road is expected to be 40 to 50 years, with the roadway section being 9-in. doweled Portland Cement Concrete on compacted dirt subgrade.

The work site provides sufficient space for the general contractor to store construction materials, park vehicles and equipment, and set up field offices.

The major subcontractors that have been hired include: M.E. Collins for watermain and storm sewer, WCHE for electrical work, Shanahan for earthwork and grading, Bookstrom for storm sewer and watermain, Linhart for retaining wall construction.

As mentioned, the project unites to separate contracts, with work along the corridor taking place in multiple locations so that both north/south arterial roadways aren't impacted at the same time.