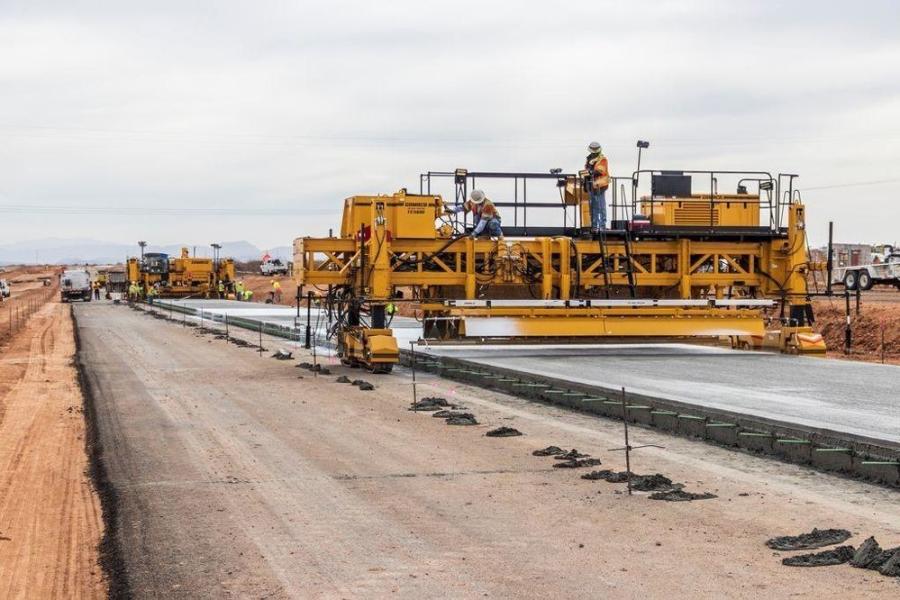 The Arizona Department of Transportation’s $77 million Gateway Freeway project, which started just four months ago, will add an interim four-lane divided roadway between Ellsworth Road and Ironwood Drive when it is completed by fall 2022.

A project to add 5 mi. of travel lanes to the Phoenix area's newest freeway is advancing in the southeast Valley with some of State Route 24's concrete pavement already in place.

The Arizona Department of Transportation's $77 million Gateway Freeway project, which started just four months ago, will add an interim four-lane divided roadway between Ellsworth Road and Ironwood Drive when it is completed by fall 2022.

A stretch of SR 24 is now paved between Meridian Road and Ironwood Drive, near the boundary between Maricopa and Pinal counties. The paving is part of an initial phase to build the future intersection between SR 24 and Ironwood Drive. Current restrictions along Ironwood Drive are scheduled to wrap up by early this summer.

The project also is currently focused on the earthwork and drainage improvements. A fleet of large trucks and other equipment is being used to haul dirt to build embankments for bridges that will carry SR 24 over Ellsworth Road in an area close to Phoenix-Mesa Gateway Airport.

A drainage channel that will run parallel to the SR 24 extension on the north side of the freeway corridor also is under construction.

The first 1-mi.-long stretch of SR 24 between Loop 202 (Santan Freeway) and Ellsworth Road opened to traffic in May 2014.

ADOT worked with the Federal Highway Administration and regional planners to arrange funding for the current SR 24 project as a way to provide drivers with a new route to ease local traffic demands — years ahead of when a full freeway could be built.