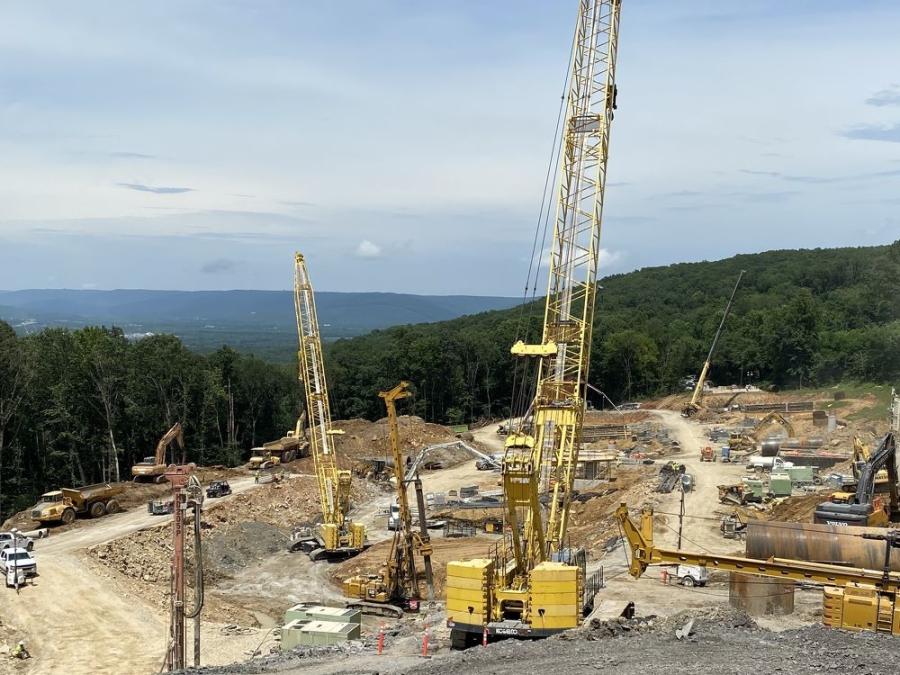 With the highway now open to motorists, crews are working to complete construction efforts on U.S. 231 near Huntsville, Ala., nine months after a landslide caused major damage. Repairs were made two months ahead of schedule on both roadways of U.S. 231 between Lacey's Spring and Morgan City, including the twin bridges constructed to safely span the slide on Brindlee Mountain. 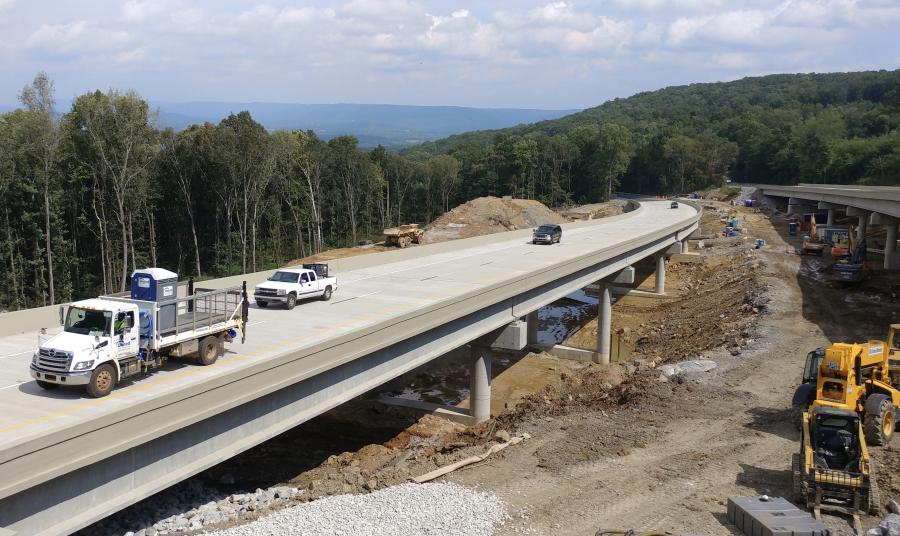 "It's extremely satisfying that such a large magnitude of work could be completed so quickly," said Curtis W. Vincent, north region engineer of the Alabama Department of Transportation (ALDOT). "The contractor, Brasfield and Gorrie, had a great plan, and implemented it by working seven days a week, 24 hours a day. It was quite an accomplishment, and won them a $2.5-million-dollar bonus."

Currently, final grading and work on topsoil of slopes beneath the bridges is taking place. Dirt work is almost complete, with the entire project expected to wrap up by the end of December.

Vincent explained that Highway 231 was forced to close immediately after the landslide, due to destruction of the asphalt pavement within the roadway.

"Major cracks and elevation differentials existed that made the roadway impassable for the traveling public," he said. "The entire roadway prism seemed to move downslope, as the colluvial material beneath the roadbed moved downward on the mountain."

Detour routes were established for approximately 15,000 vehicles per day that commute along the route to and from Huntsville. Officials let an emergency contract the following morning, to begin removal of the asphalt and base in the area of the slide, so that the geotechnical staff could begin evaluation.

"The site was considered dangerous, because movement continued to occur," said Vincent. "Instrumentation was installed so that the movement could be monitored as workers took precautions as work progressed. Materials and Test Bureau of ALDOT organized and performed testing, along with consultants from Dan Brown and Associates and Auburn University." 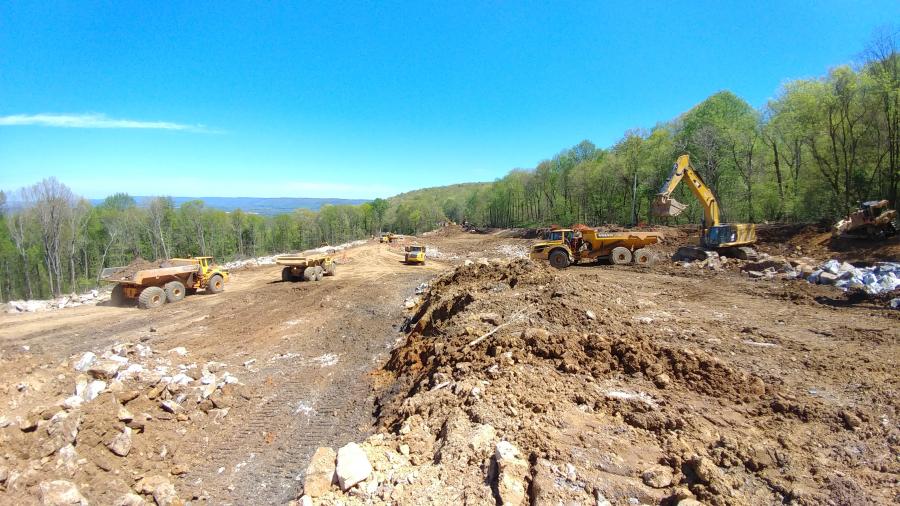 During much of the construction, motorists were detoured onto county roadways. Vincent said the traveling public had to adapt to a 16-mi. detour (14-mi. net), but were surprised that crews constructed the two bridges and had the roadway open within four months of beginning construction.

The slide was the result of heavy rainfall back in February. Further investigation revealed a slide plane roughly 50 ft. underground, affecting roughly 1,000 ft. of the bifurcated highway in each direction.

As with all projects, safety was a major concern for crews on the scene.

Work on the $22.5 million project has been conducted in phases. During the first stage of repair, Reed Contracting removed approximately 220,000 cu. yds. of dirt and debris from the slide area. Material was taken to a borrow pit approximately 5 mi. away in Huntsville.

"Reed Contracting is a local contractor with excellent work history with ALDOT," said Vincent. "They had manpower and equipment locally that was utilized for the removal of dirt work prior to the bridge project. Brasfield and Gorrie also utilized subcontractors, and their personnel to implement a well thought out plan to construct the bridges. Brasfield and Gorrie was extremely professional to work with, along with construction inspection provided by Volkert and Associates."

A variety of heavy machinery was needed on the project, including equipment to remove earth and construct the foundations for the bridges. Each bridge is approximately 1,000 ft. long and 44 ft. wide, accommodating two 12-ft. lanes with 10-ft. shoulders, and constructed on stable foundations consisting of massive drilled shafts socketed in solid rock beneath the landslide.

Vincent noted that the drilled shaft work for the 30-plus columns has been the most challenging part of the job. The extensive drilled shafts were anchored into bedrock 30 to 40 ft. below the surface. The project required 32 drilled shafts, with a 9.5 ft. diameter. The task was considered crucial to the project's overall success.

"The shafts along with the accompanying concrete and steel anchored these structures to solid bedrock to prevent any future movement," said Vincent. "This project demonstrates the ability to accomplish huge tasks once a good plan is established, and the contractor supplies the proper equipment and crews to achieve their goals."

More limited cracking actually occurred in February 2019. According to the ALDOT, measures to address the landslide weren't taken then, because the problem had yet to be completely identified. More in-depth repairs to the damaged pavement weren't made because, without a solution to correct the underlying issue, the possibility of further subterranean movement meant potential repeat road damage. Recognizing that an underlying geotechnical issue was at work, ALDOT installed instruments to monitor the area and obtain a better understanding of the extent, cause and methods to address the problem.

While some additional minor repairs were necessary as the new pavement over the crack settled, the instruments installed on site detected very little movement during the remainder of the year. If ALDOT had more details about the problem in February 2019, the suggested repair then would have been the same as it is today. 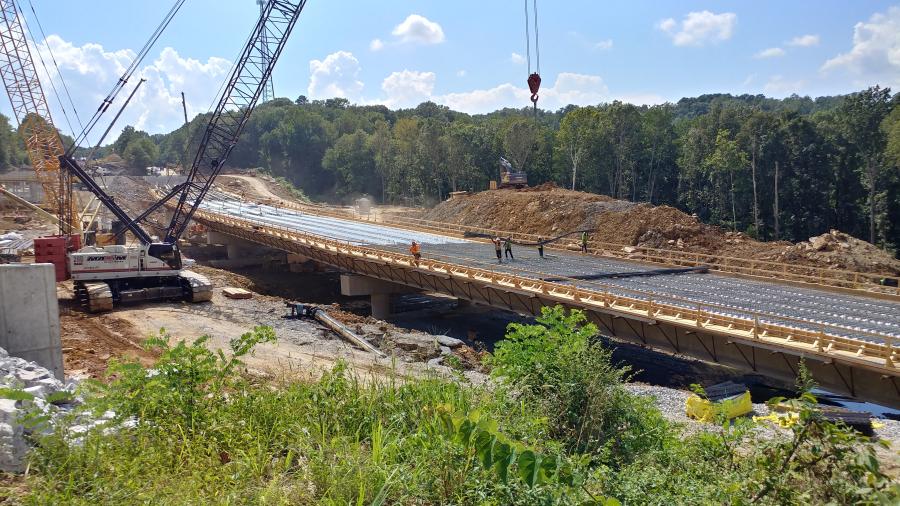 The majority of the work will be paid for with federal emergency funds because the governor declared a flooding event a disaster and signed a proclamation qualifying it for federal emergency aid. In a statement, Gov. Kay Ivey applauded the September 2020 reopening, which was marked by a ceremony attended by state legislators and other officials.

"I am proud that the people of Morgan County and surrounding areas will now be able to enjoy an easier and smoother commute on Highway 231," said Ivey. "Not only has a repair and improvement been made to the infrastructure, but it was completed more than two months ahead of schedule, thanks to the state working hard with a private sector partner.

"We remain committed to enhancing Alabama's transportation infrastructure to ensure every Alabamian in all parts of the state can reap the benefits. This is certainly exciting and welcome news." CEG