Crews Juggle Tasks to Stay on Schedule in Alpharetta, Ga.

The project is the result of committed business leaders having a vision for what an area could become. 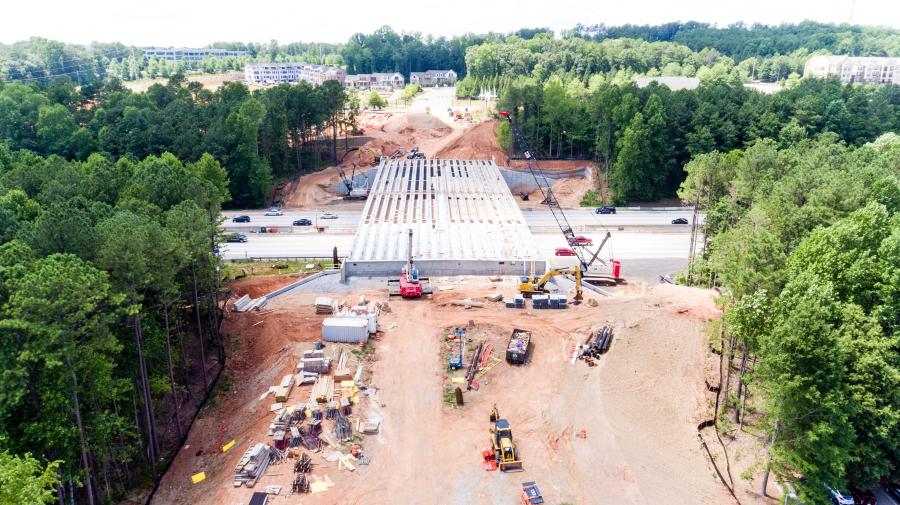 C.W. Matthews photo A $17.9 million project that will transform a well-traveled area in Alpharetta, Ga., has crews juggling multiple tasks, while dealing with an aggressive construction schedule.

A $17.9 million project that will transform a well-traveled area in Alpharetta, Ga., has crews juggling multiple tasks, while dealing with an aggressive construction schedule.

“At the heart of the Encore Parkway Bridge Replacement and Corridor Improvement Project is connectivity and improved accessibility,” said Ann Hanlon, executive director of the North Fulton Community Improvement District (CID). “This project will not only replace the Encore Parkway bridge, but it will also transform a local 'cut-through' into a multi-modal complete street, and create the first east-west pedestrian/bicycle connection to Alpharetta's popular Big Creek Greenway. The project is the result of committed business leaders having a vision for what an area could become, and corralling the partners, resources and funding to make it happen.”

The work is being funded by a combination of local, state and private funds and grants.

“After a 10-year period of planning and design, the entire team is excited to see the project finally under way,” Hanlon said.

“At the time of the study, the area where Encore Parkway is located held a regionally significant mall and several big box retailers, but there was very little new development taking place. Close to GA 400 with vacant land available and redevelopment opportunities, the LCI study helped uncover the potential for the Encore Parkway corridor to feature new and improved development. The new bridge and corridor improvements, including pedestrian lighting, landscaping and aesthetic features that can be seen from GA 400 or while on the bridge itself, were identified as projects that would encourage a more sustainable development pattern for the area, as well as a safer option for commuters, cyclists and pedestrians.”

Sewczwicz said, “Since the LCI study was conducted, the growth it forecasted has actually come to life. Several new developments have been built or are in progress nearby, including two new townhome communities, a mixed-use development and several new entertainment venues, such as Top Golf and Main Event.

“While the project was being designed, the North Fulton CID worked to educate business leaders and property owners in the community, gaining support from leadership at North Point Mall and Verizon Wireless Amphitheatre.”

Shutting down the bridge, however, was no small task.

“It was a major undertaking coordinating local police officers, as well as the state DOT, and it required multiple evenings of rolling roadblocks. More than 30 outreach meetings were held with community leaders to ensure that the public was aware of the plans,” Sewczwicz said.

According to Sewczwicz, motorists are coping with the bridge shutdown and other work as best they can.

The new structure is roughly 116 ft. (35 m) wide, compared to the old bridge, which was approximately 44 ft. (13 m) wide. The new bridge will be completed by mid-November, and Sewczwicz said staying on track is crucial.

“The schedule is extremely important, since we have coordinated with the regional mall and other retail partners to ensure that the shopping season is not disrupted.”

Eric Bosman, program planner of Kimley-Horn and Associates Inc., said, “Anyone who has an interest or need to cross GA 400 in and around the North Point area will benefit from this improvement.”

Aaron Wadley, PE, senior project manager of Atkins, a global design, engineering and project management consultancy firm said, “This project will improve the alignment of Encore Parkway with multi-use paths, connecting the west side of GA 400 with the popular Greenway Trail. There are several detailed hardscape features, such as a mix of concrete pavers, form-lined concrete stained to resemble natural stone and stone-veneered walls.

“These features are based on the stone walls at Mansell Road and Windward Parkway that serve as a gateway to the North Fulton CID.

According to Wadley, the CID's project management team, designers and the contractor have spent weeks in meetings, coordinating stain colors, paver pattern and color and natural stone, while making minor adjustments to ensure the final result carries forward the vision for the project.

In addition, lush plants, decorative lighting and decorative furniture will grace the final alignment of Encore Parkway and the Greenway Trail Extension along Northpoint Parkway.

Utilities are abundant throughout the alignment and presented a few potential delays along the way.

“There are at least four separate telecoms with fiber optic facilities on the project, said Wadley. “Additionally, Georgia Power had to make some changes to their vaults and power bank to accommodate the new cross-section. Jeff Jacques, C.W. Matthews' utility coordinator, was thorough and consistent in getting action from the utility owners. At one time, a telecom told the project team they needed one year and up to $1 million to rerun their line, adamant that it was not flexible conduit and could not be adjusted. Pete Sewczwicz immediately offered to pothole the conduit, and it was discovered that it was semi-flexible duct, and the telecom worked with C.W. Matthews to perform a staged adjustment while the MSE wall was being constructed.”

Streetlights are being installed by Brooks, Berry, and Haynie, and has not been an issue, to date.

“They are responsive and helpful in mitigating potential issues,” said Wadley. “There is heavy coordination between trades, as the lighting conduit will traverse the rebar in the bridge deck, walls and columns.

Weather also is a factor.

“Summer in Georgia brings a high heat and humidity that culminate in isolated afternoon thunderstorms. Otherwise, we have actually had a fairly dry spring and summer,” said Wadley.

Building the new sidewalk is another challenge. According to Wadley, all of the sidewalks along Encore will be built on a new roadway section, generally higher than the previous road. Alpharetta has a number of trees, and crews on the Greenway Trail extension along Northpoint Parkway have encountered extensive tree roots.

“The design accounted for some tree roots by raising the curb along Northpoint six inches; however, while working with the city of Alpharetta and their on-call vendor, it was determined that all the trees along Northpoint would be impacted and unlikely to survive. The sidewalk and Greenway extension were put on hold while the tree removal was performed,” said Wadley.

Mark Dolan, engineer of the structures division of C.W. Matthews Contracting Co. Inc., said multiple utilities on the bridge that had to be relocated and removed in a short time frame prior to starting work has been a major issue during construction, along with traffic safety and the overall project schedule. When construction began in January 2016, the relocation of all the utilities from the bridge had to take place, along with clearing, grubbing and erosion controls.

“Right now we are preparing to pour the span 1 and 2 bridge decks, and we are working on the mass grading,” said Dolan.

The old bridge has been removed; footings, columns and caps are complete; PSC beams are set; deck form work has started; and MSE walls have been built.

“The structural aspect of the MSE walls is complete. We will be coating the walls with a multicolor stain to give it a natural stone look. The form liner was chosen by the owner to match similar sites in the area,” said Dolan.

Dolan said crews worked nights and weekends during the construction of the structural columns in the GA 400 median.

“Due to the intricate details, the columns had to be custom built completely out of wood.”

The beam setting over GA 400 went according to plan.

Key tasks yet to be carried out include pouring the bridge decks, constructing the decorative parapet, planters and sidewalks on the bridge and grading and paving the road for traffic. The area will be open to traffic Nov. 15 with work completed mid-2017.

Dolan said prior to construction, the area was a normal two-lane road, wooded on both sides and not very pedestrian-friendly. He said grading work has gone smoothly.

“Major grading to date has been for MSE wall construction. The demolition was completed by removing all of the concrete deck and picking the beams off with a mobile Link-Belt crane. The demo was done mostly at night and on the weekend.”

Crews have been on site six days a week, putting in 10-hour days.

“Working on the bridge fall protection is our number-one concern and area of focus,” said Dolan. “Also, working around SR 400, the traffic safety is a concern.”

Main equipment being used on the job includes a Link-Belt LS 218, a Link-Belt RTC 7500, a Link-Belt LS 238, a Bidwell 4800, a Cat 336 excavator , a Cat 321 excavator and Cat D4 and D6 dozers. Materials that are being used during construction include concrete, rebar, PSC beams, precast MSE wall panels, graded aggregate base and asphalt.

According to Keith Kunst, vice president of the design and consultancy firm Arcadis, “Our biggest challenge on the project was meeting our client's aesthetic goals, while designing a bridge that was GDOT approved and as cost-effective as possible. To that end, we basically designed a standard GDOT bridge with numerous enhancements and custom modifications to GDOT standard columns, parapets, sidewalks, railings and walls.

“The Tennessee fieldstone patterning throughout the structure was cast in place using high-quality formliners, and the surfaces will be field-stained to finalize the fieldstone look and coloring. The fencing was a large budget item, so to keep costs of fabrication and installation down, we designed the fence to use readily available materials, having as few standardized panels as possible and being completely shop finished and then bolted together in the field. This lowered cost, improved quality and will make future maintenance easier.”

“It shouldn't go understated how much coordination from multiple players went into keeping the project on track,” said Hanlon. “From maintaining disruption of a major state highway to keeping a regional mall and entertainment venue in tune to the schedule, the project has been a true partnership from beginning to end.”