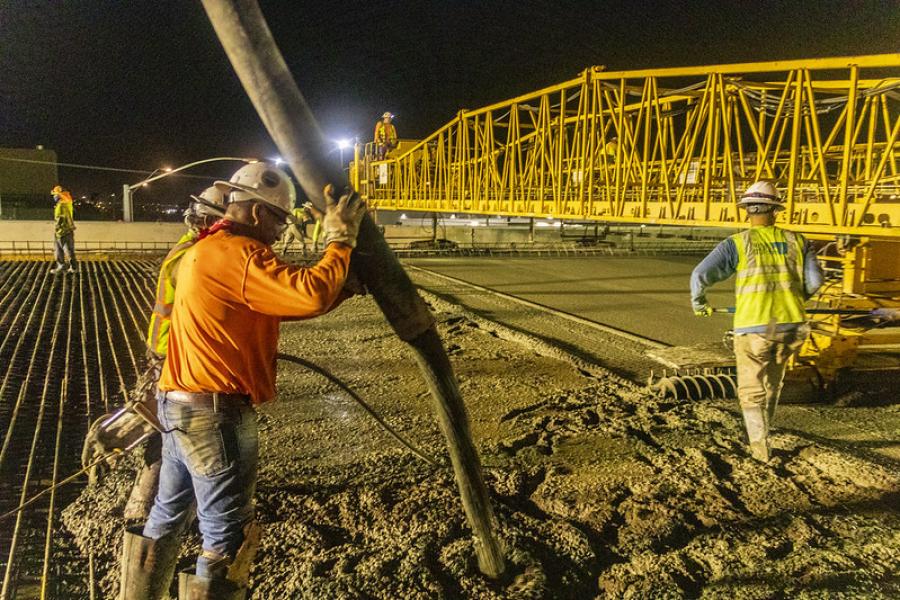 The project to build a new, expanded Interstate 17 bridge over Central Avenue in Phoenix is heading into its stretch run, now that crews have poured the concrete for the new northbound side of the bridge.

The Arizona Department of Transportation's $13.5 million project is on schedule for completion this fall. Work started in May 2020. The project team is building a wider I-17 bridge that also provides more clearance for traffic and future light-rail trains along Central Avenue.

Crews used an extended boom pump system to ship the concrete from trucks on Central Avenue up to the level of the bridge's deck. In all, 545 cu. yds. of concrete were poured for the northbound bridge span. Specialized equipment, including a pavement roller, was then used to smooth the concrete and form the steel-reinforced deck.

Construction of the new bridge has taken place in stages, allowing for the need to keep I-17 traffic moving as much as possible with two lanes in each direction within the work zone. A limited number of full freeway closures have been needed while work has been underway to construct a bridge that will be wide enough to support additional lanes when future I-17 expansion projects are scheduled.

The original I-17 bridge at Central Avenue opened to traffic in 1962. The new bridge will be wider to accommodate regional plans for additional lanes along I-17 when future funding is available. Increased clearance will provide more room for commercial trucks as well as Valley Metro's future South Central Avenue light-rail line.

The project is funded in part by Proposition 400, a dedicated sales tax approved by Maricopa County voters in 2004.