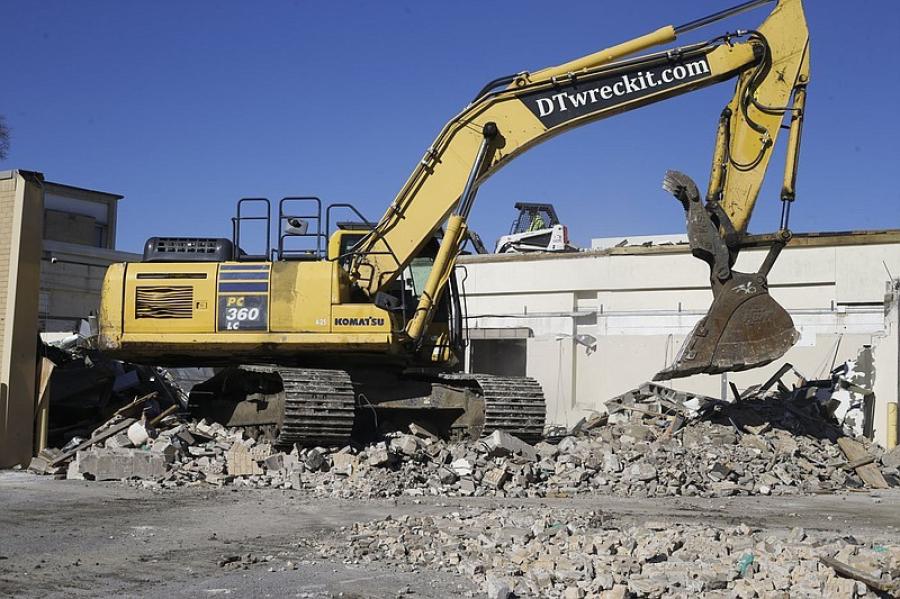 A construction crew demolishes, the building between the courthouse and the County Administration building in Bentonville. (NWA Democrat-Gazette/Charlie Kaijo photo)

DT Specialized Services of Tulsa, Okla., started the demo Dec. 7. According to county Judge Barry Moehring, the contract is for $72,772.

The one-story section behind the courthouse in Bentonville is being taken down to make room for a two-story addition planned for the site.

Following that, the concrete foundation will be torn out. Moehring and Bryan Beeson, facilities administrator of Benton County, said the project is on schedule despite losing work time recently due to snow.

DT Specialized Services got a quick jump on the job, so any time lost to weather shouldn't impact the timeline, Moehring said.

The 5,000-sq.ft. building once housed the juvenile detention center and later was sectioned off and used by other county offices, including the coroner, Beeson reported.

The building being demolished was unusable space, Moehring said. The county will be able to get a bigger building on a smaller footprint with more parking, Beeson added.

Bids for the construction came in Dec. 18 and were to be considered in the week before Christmas, Moehring said. Once they are awarded, construction is expected to start in January.

Until the work is completed, Horwart's courtroom and chamber will be in a small area in the courthouse last used as a courtroom in 2012. The 888-sq.-ft. courtroom has been remodeled, at a cost to the county of $23,796.

Included in the court expansion is $231,783 to repair the annex where Circuit Judge Brad Karren holds court, according to documents. The annex is across the street from the main courthouse. That project is winding down with outdoor signs and lighting left to do.

The entire courthouse expansion should wrap up by the end of 2021, Moehring said.

A key reason that a new courtroom is needed is because of incoming Judge Christine Horwart, who was elected in March and will preside over Benton County's seventh-circuit court beginning Jan. 1. The Arkansas Legislature added the judgeship to assist with the increasing caseload.

Horwart's courtroom and office area will be on the second floor of the addition, which also has a lobby on its first floor. The expansion will be 5,500 sq. ft., with the rest of the downtown courthouse currently at 28,080 sq. ft.

Benton County will finance $3.1 million for the expansion. It secured the loan from Regions Bank for five years at 1.59 percent with no prepayment penalty, said Brenda Guenther, county comptroller. The Quorum Court approved the plan in July.

"I very much look forward to the completion," said Justice of the Peace Shirley Sandlin, as the court building is in her district.

Sandlin, who didn't run for reelection and served at her last Quorum Court meeting Dec. 18, said she would have liked to have seen a completely new courts building, "but that is not the case."

"We definitely need the space, and [this expansion] buys us more time," she added.

Moehring described it as a modest expansion on the day demo work started.

"It will take care of our courtroom needs for a good five or 10 years," he said.