Members of the public turning out for the demolition were encouraged to view it from the banks of the Arkansas River, as well as from a pedestrian bridge. 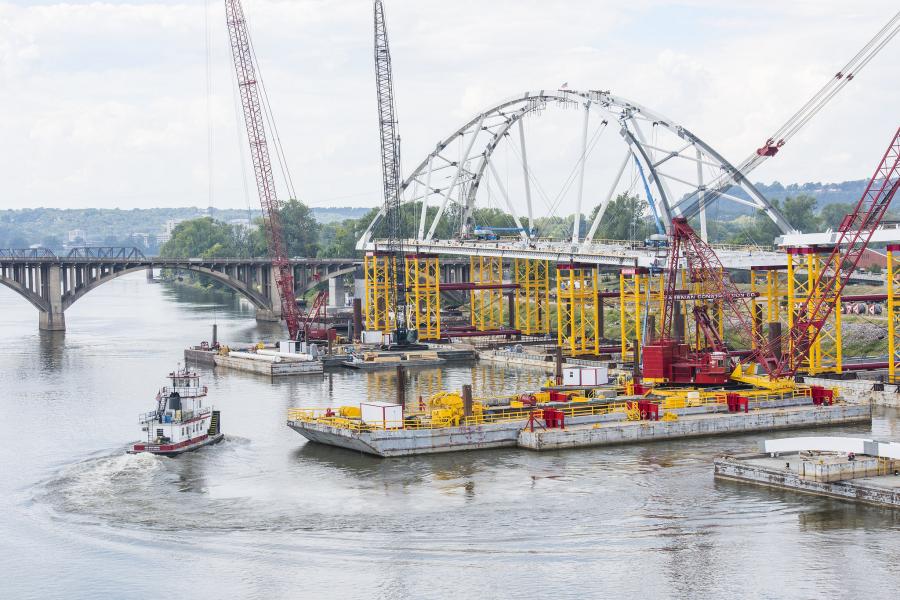 Rusty Hubbard, AHTD photo Although efforts to bring down the 93-year-old structure didn’t go according to plan, work remains on schedule for the replacement Broadway Bridge (Hwy. 70) over the Arkansas River in Pulaski County. The Arkansas State Highway and Transportation Department (AHTD) is overseeing construction, which began in January 2015.

Although efforts to bring down the 93-year-old structure didn't go according to plan, work remains on schedule for the replacement Broadway Bridge (Hwy. 70) over the Arkansas River in Pulaski County. The Arkansas State Highway and Transportation Department (AHTD) is overseeing construction, which began in January 2015.

“This project has generated more than the usual interest, because it's in the middle of downtown Little Rock,” said Danny Straessle, AHTD public information officer. “More eyes than usual are on it, not just from motorists who pass by, but also from the thousands of office workers in tall buildings who can look down on the site.”

The total cost for the bridge, which connects Little Rock and North Little Rock, includes removal and demolition of the current bridge and construction of the new one. Additional improvements in the area also will be made. Straessle said the public was surprised how quickly the contractor was able to take down the old structure.

“The compressed time frame for completion is not something you see every day in Arkansas. Folks are very much accustomed to highway projects taking a long time, due to the nature of the work. This goes to show if the public can see measurable results, they are likely to be more supportive of work that will ultimately benefit them,” said Straessle.

The need to replace or rehabilitate the original bridge was identified several years ago, as it was determined to be structurally deficient. Given its age and an estimated average daily traffic volume of approximately 25,000 vehicles, a replacement structure couldn't come soon enough.

“The bridge was functionally obsolete, and would have cost too much to maintain,” said Straessle. “Some people saw it as historical, but it had been modified, and the remainder of the original bridge was falling apart. Concrete was falling off and rebar was exposed. It was almost like you needed a hard hat to be safe. The bridge needed wider lanes and full shoulders, plus they made pedestrian and bicycle accommodations.”

In 2014, Massman Construction Co. of Kansas City, Mo., was awarded a $98.4 million contract to replace the bridge. Pulaski County committed $20 million to the project, having requested a more ornate structure.

“One immediate benefit is that there's more width for bridge traffic, and it's a very interesting geometric design, with intense steel fabrication,” said Straessle. “The selected design is a twin basket handle network tied arch.”

In October 2016, explosives were set off to bring down the existing bridge, but the implosion failed. While it should have taken a mere 30 seconds to sever the steel arch and bridge deck, resulting in a controlled collapse, the demolition team needed five hours to complete the task.

As part of the high-profile teardown, charges were placed inside holes that were drilled into the concrete arches. The resulting detonation was intended to pulverize the arches into manageable pieces, allowing workers to easily remove the debris. The arches were wrapped in a fabric to help minimize dispersal.

The blasts weakened the span, but parts of the bridge fell against themselves, instead of landing in the river. Ultimately, crews attached a cable to the bridge and managed to pull it down safely. Crews were given 24-hours to remove debris from the McClellan-Kerr navigation channel.

A 1,500-ft. (457 m) clear zone was created to ensure safety leading up to the teardown. Members of the public turning out for the demolition were encouraged to view it from the banks of the Arkansas River, as well as from a pedestrian bridge.

“On the morning of the implosion, many people came out to watch,” said Straessle. “A lot of them thought they could take 15 or 20 minutes to see it come down, but it turned out to be a day-long event. A very festive atmosphere emerged, as crowds watched the Internet stream and live television covering the event. Somebody started a Twitter handle, and there were all kinds of tweets. We were bantering with them. It gave the department an opportunity to join in the fun, and laugh at ourselves.”

Weeks later, concrete arches from the original portion of the bridge were demolished, without incident. Concrete footers also were brought down, mostly under water. Straessle noted that despite some challenges along the way, the bridge replacement has been a rather smooth process, overall.

“Massman Construction and AHTD have partnered together very well to bring the taxpayers a successful project that will serve the community well into the next 75 years and beyond,” said Straessle.

Heavy machinery being used on the project has included three cranes, excavators, track hoes with pneumatic rams and mechanical jaws, material lifts and handlers and pavers. During construction, large trucks hauling debris as well as demolition heavy equipment have made their way through the downtown area, with pedestrians cautioned to be aware of their surroundings.

In addition to monitoring various activities, crews have had to deal with weather issues along the way. High water events on the Arkansas River and challenges in steel fabrication related to the complexity of the new twin-arch structure prevented the contractor from beginning a six-month closure period, as scheduled.

Massman committed to a 180-day closure period, during which time workers must remove the old bridge, construct the new bridge and open it to traffic. The term “open to traffic” does not mean the project is finished; instead, it's estimated the contractor will require an additional two months to bring the project to completion. Motorists, however, will be able to use the new bridge once it opens to traffic.

The closure period was included in Massman's bid to replace the bridge. The construction contract includes an incentive/disincentive clause of $80,000 per day. If Massman opens the new bridge to traffic before the 180 days expires, the company will earn an incentive of $80,000 per day, up to a maximum of 50 days. If the 180 days is exceeded, Massman will be charged $80,000 per day, with no limit on the number of days that amount can be assessed. AHTD has launched an official countdown clock on its website to keep the public informed during this stage of construction.

In late 2015, Arkansas Highway Police issued permits to a trucking company that enabled over-sized and over-weight loads to deliver the steel needed to construct the arches of the new Broadway Bridge. The largest transfer included steel members 75 ft. (22.9 m) long and weighing 85,000 lbs. (38,555 kg). Construction crews had to begin offloading and painting each member, before loading them onto barges. They were then floated upstream to the second staging area, on the river between the Broadway and Main Street bridges.

The floating staging area allowed for construction of the arches before being hoisted into place. The arches are estimated to weigh 2,000 tons (1,814 t) each.

The bridge shut down to vehicle traffic that morning, so the contractor could perform demolition work and complete construction of the new structure. The new bridge is expected to be completed by spring.

Straessle said that for the most part, motorists have been able to cope with the closures during construction.

“There was great trepidation among commuters. Downtown Little Rock has people driving from 30 miles out and the Broadway Bridge is a means to cross the river, with the Main Street Bridge as an alternate route. We worked to reroute traffic, but there was gridlock initially, because some folks did not plan ahead and went their regular route. It took about a week for them to figure it out,” Straessle said.

Currently, crews are in the middle of a concrete pouring phase and heating units have been brought in to keep temperatures warm. To date, there have been no problems.

“Things are going well. Massman is where it should be. Right now, crews are receiving the final shipment of steel beams and will be putting them into place. We look forward to seeing continued progress on this project,” Straessle said.

The original Broadway Bridge started construction in 1921. The structure, a five–span open spandrel arch concrete bridge, with a length of 2,786 ft. (849 m), a deck width of 40 ft. (12 m) and a 24.3 ft. (7.4 m) vertical clearance, officially opened in 1923. The structure was dedicated to veterans of World War I, with roughly 50,000 people attending the grand opening events. In 1974, two spans were replaced with a single steel through arch span to provide a navigation channel for the McClellan-Kerr Navigation System on the Arkansas River. —CEG