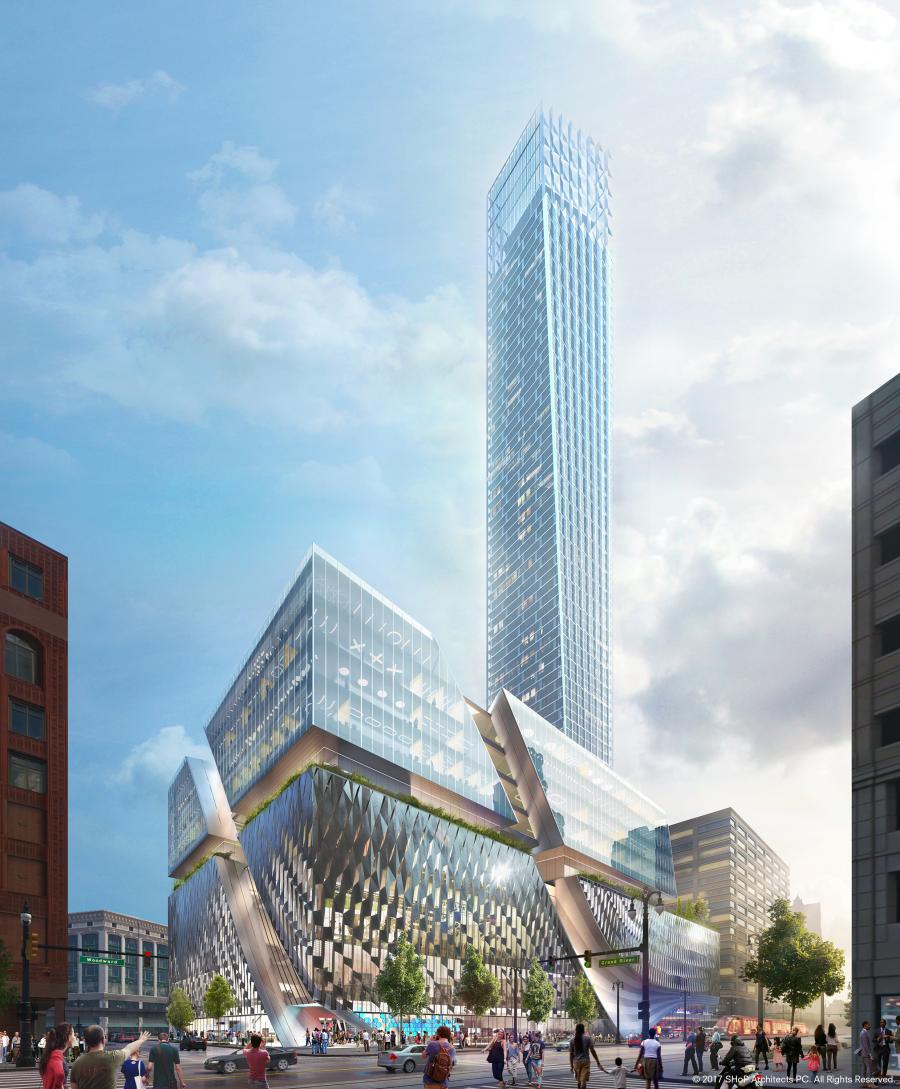 A rendering of the 58-story building that will dominate the local skyline on the site of the iconic J.L. Hudson department store.

DETROIT (AP) An 800-ft.-tall centerpiece is coming to Detroit's resurgent downtown as the city continues to build momentum about three years after exiting the largest municipal bankruptcy in U.S. history.

The 58-story building dominating the local skyline will rise on the site of the iconic J.L. Hudson department store, whose 1983 closing epitomized Detroit's economic downfall.

“When we lost Hudson's it symbolized how far Detroit had fallen,' Bedrock Detroit real estate founder Dan Gilbert said during a ceremonial groundbreaking for the new building. “When it was imploded in 1998 it was a very sad day for a lot of people.'

But the bad times for downtown appear to be largely over. Bedrock Detroit's $900 million, two-building project will include a 58-story residential tower and 12-floor building for retail and conference space. Up to 450 residential units can be built in the tower.

It is one of four projects representing a $2.1 billion investment in downtown by the Detroit-based commercial real estate firm. Altogether, the projects are expected to create up to 24,000 jobs in a city that desperately needs them and generate $673 million in new tax revenue.

Mayor Mike Duggan's office has spearheaded redevelopment programs targeting a number of city neighborhoods, but Detroit's growth is most evident in greater downtown, where office space now is limited and available apartments are tough to come by.

A ribbon-cutting was held in August for an $860 million sports complex just north of downtown. The 20,000-seat Little Caesars Arena is the new home of the Detroit Red Wings and Pistons. It will anchor a 50-block neighborhood of offices, apartments, restaurants and shops.

Software maker Microsoft announced in February that it plans to move its Michigan Microsoft Technology Center next year from the suburbs to downtown. In 2016, Ally Financial opened new offices downtown that the financial services company said eventually would be occupied by more than 1,500 employees and contractors.

“Bedrock building on the Hudson's site will be an important addition to the community and the vitality and prosperity of downtown,' said John Mogk, a Wayne State University law professor whose work has included policy on economic development issues.

“It will act as an important centerpiece for continuing the overall downtown development ... but much more has to be done for the entire city to feel a resurgence.'

However, much work remains for a city where many residents are still poor.

The city's 2016 poverty rate was just over 35 percent — the highest among the nation's 20 largest cities and more than double the national poverty of 14 percent. A family of four is considered living in poverty if its annual earnings are less than $24,563.

Downtown construction projects such as the work at the Hudson's site can help change that, some say.

“What a shame that anybody should be unemployed in Detroit when we have a need for skilled trades,' Gilbert said. “We like to say Detroit is located at the intersection of muscle and brains. We need brains to sort this all out ... somebody still has to build stuff. We still need muscle.'

While Bedrock's new building would be Detroit's tallest, rising above the 727-ft. Renaissance Center along the city's riverfront, it still would be far shorter than some other U.S. towers.

Although the 25-story Hudson's building was once the nation's tallest department store, it measured only about 400 ft. It was far more famous for what was inside.

When Detroit was humming along and leading the nation in car production, the store was where auto executives and assembly line workers shopped. From household goods to clothing and furs and many things in between, it was a primary downtown destination.

There were 50 display windows, 12,000 employees and 100,000 customers per day. But as shopping tastes shifted to expansive suburban malls and Detroit's population tumbled by more than 600,000 people between the 1950s and 1980, Hudson's lost its luster.

“Building something of significant magnitude on the old site will provide a good deal of good feelings by older generations,' Mogk said.

Oakland County Executive L. Brooks Patterson called it a “huge magnet for people like me who grew up in Detroit.” He and his brother would ride a city bus downtown and play tag on the Hudson's escalators.

“I think the fact they are putting up this glorious glass building, I think it's a fitting succession,' Patterson said.