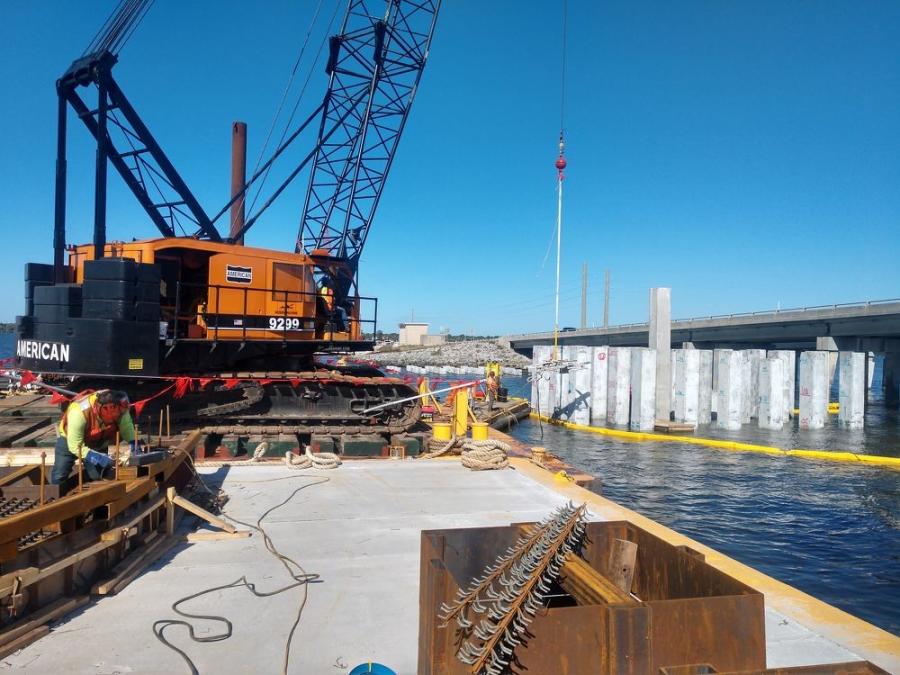 A critical $126 million infrastructure project that will provide a new gateway to Kennedy Space Center and Cape Canaveral Space Force Station is under way in Florida. (Florida Department of Transportation photo) 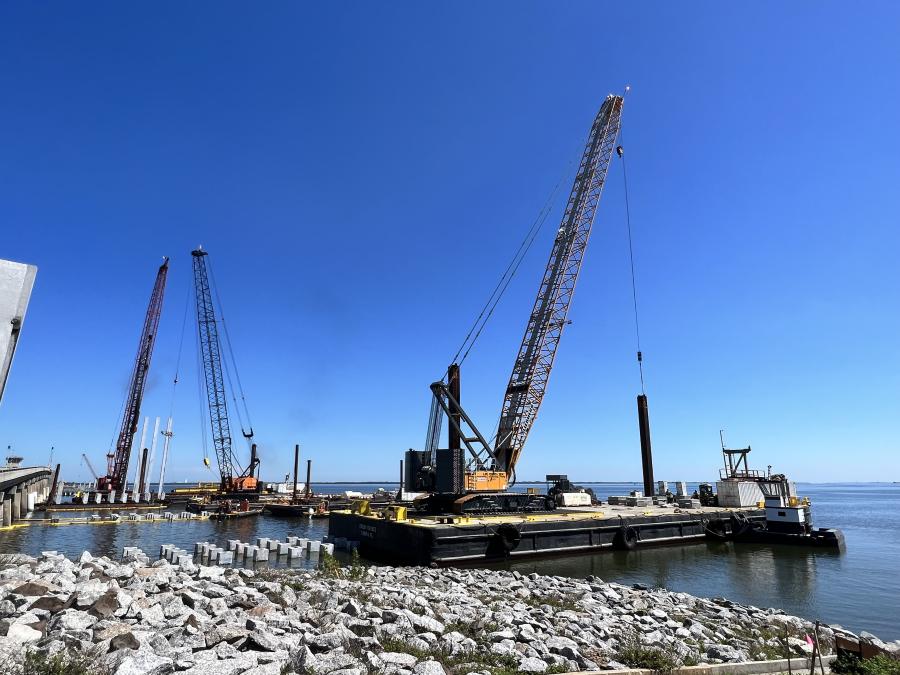 "Since the original construction of the NASA Causeway Bridge in 1964, travel and transportation across the bridge has significantly increased, which has increased the need for it to be replaced to ensure the structure remains not only safe for travel, but enhanced for mobility and connectivity as well," said Suzanne Phillips, Florida Department of Transportation (FDOT) operations engineer.

"Additionally, this is a drawbridge, meaning visitors, commuters and workers who depend on the causeway to travel must wait while it rises for large vessels to pass safely underneath. With the new construction, it will be replaced with a taller and wider fixed span causeway, thus eliminating the wait time for drivers for maritime traffic.

"The upgrades also include increasing the payload for the bridge, which will allow large loads and transports with heavy machinery to use the causeway, as previously drivers had to find access to their destinations in other ways. Upgrading this bridge is significant, as it solidifies central Florida as a leader in the space industry."

Interest in space exploration has continued over the past decades, and with that growth comes a need for safe and reliable access for anyone who drives on the bridge.

"Replacing this bridge will support future growth and improve public and commercial mobility. Additionally, it's more cost- effective to replace the bridge now than maintaining the bridge for another ten years and then replacing it."

According to Phillips, the new bridges will create a free-flowing environment where maritime motorists will have ample space to travel the intercoastal waterway. They will create a safe passageway for the transport of rockets destined for launch.

The project will prepare Florida for future growth, and also boost economic productivity and global competitiveness.

"Cape Canaveral has long been looked to as the hub of space exploration, so improvements to the payload and accessibility at the NASA Causeway helps prepare Florida for the potential of all that the space industry has to offer," said Phillips. "As different entities seek to further the idea of space travel, FDOT is preparing Florida roads and bridges to expand and improve access to the area.

"This project takes place in the heart of a tourist destination, and has had careful planning and coordination to aid both residents and visitors of this area to enjoy the benefits for generations."

To mark the start of construction, a special ceremony took place on the NASA Causeway Bridge in December 2021.

"As a symbolic groundbreaking, dignitaries were invited to make a handprint in a concrete slab and sign the wet concrete with a nail," said Phillips. "It was great for these partners to kick off construction together in an interactive and well-received manner. It was extra special that Lieutenant Governor Jeanette Nuñez and other elected leaders who represent this area were able to join the ceremony, as well. 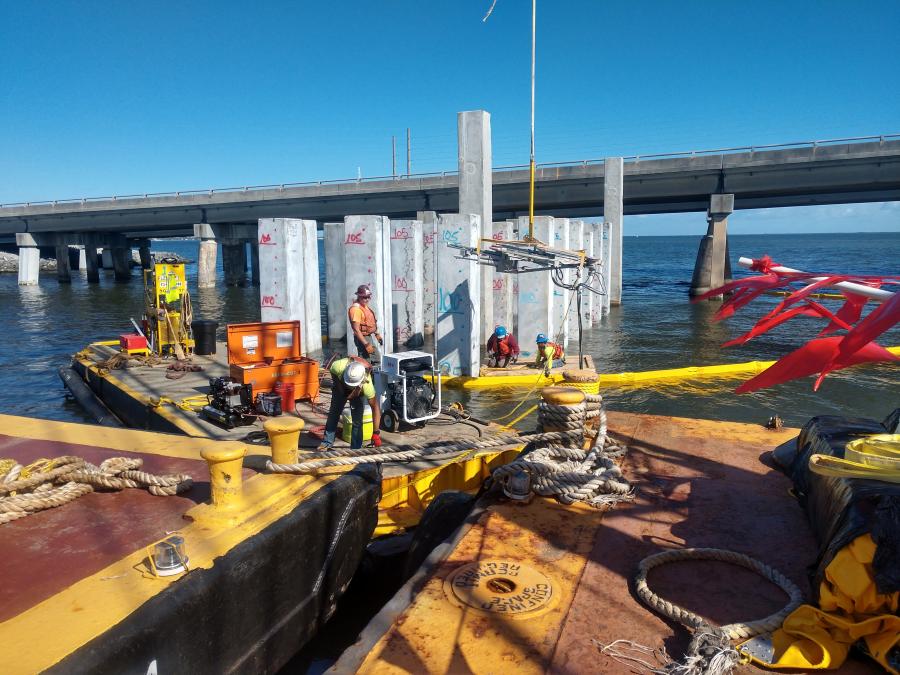 "Breaking ground on a project of this scale was incredibly rewarding, especially for one as innovative as this, which has so many stakeholders impacted by it. It's an honor to be working with so many partners on a project that has ties to historic significance, and it's even more humbling to know this project will help further our state in the new era of space exploration. "

To date, traffic shifts have been minimal to avoid creating traffic backups or congestion along the causeway. Additionally, FDOT aims to lessen impacts for motorists during construction through efforts such as working overnight and coordinating with partners, so events are planned accordingly.

"Many variables affect the supply chain and can, in turn, affect the flow of the project schedule. Our teams work hard to be proactive in planning ahead, so we're prepared for anything."

Currently, pile driving is taking place, with debris and seawall removal continuing to prepare for new bridge structures. Test piles are nearly completed, and production piles have begun for the southern bridge.

Demolition of the current causeway will be necessary for completion of the northern bridge.

"Demolition work will involve processes like separation and removal, using heavy machinery," said Phillips. "Due to the delicate ecosystem where the work is taking place, the contractor will use several methods to remove the existing structure and minimize debris. For separation, the contractor will employ concrete saw cutting to break down large roadway areas into pieces that can be then removed with large machinery. The demolition is scheduled to take place after the southern bridge is completed and open to the public; however, schedules are subject to change. We are still developing plans evaluating the estimated time of the demolition period."

All work being done on site is monitored closely by several teams to ensure safety of workers and motorists. Lane closures are needed to maintain a safe work environment, and traffic shifts have not created congestion or safety concerns.

Required closures are closely coordinated with stakeholders, and consideration for special events is also taken into account to ensure mobility through the work zone, even during construction.

There have been minimal impacts from weather, so far. However, things can change quickly, especially during hurricane season. With this long-term project, the team will remain vigilant, and adjust to any issues accordingly.

Orion Marine Construction Inc. serves as the contractor for the project, which is anything but routine.

Utility relocations also must be considered, along with permitting, erosion control, dealing with endangered species and maintenance of traffic.

Phillips said crews are excavating only where necessary, taking special care to ensure environmental needs are being met. 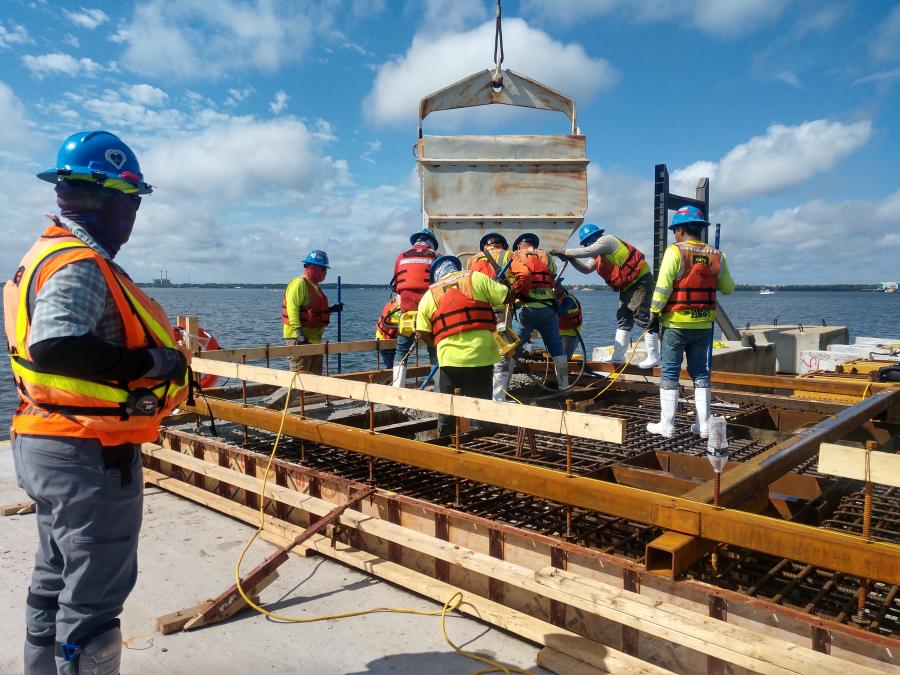 Equipment on the job includes a pile driving hammer capable of delivering 180,000 ft.-lbs. of energy. There also will be six cranes — four on the water and two on land, which range from 165 tons to 330 tons. Other heavy machinery includes eight barges — four for the cranes and four for material delivery and storage. A tugboat will move the barges into position, and several boats will be used to move workers and materials.

Concrete and steel will be used for bridge construction. Piles and beams are manufactured off-site and shipped or trucked to the project.

The new bridges should be operational by the end of 2025. Phillips said watching the project slowly come to life is inspiring.

"A collaboration effort is always rewarding to see, especially with projects that involve several big agencies. It will be even more exciting when the project is complete, and all agencies involved can present residents, workers and visitors with an enhanced and more reliable access route for transportation." CEG