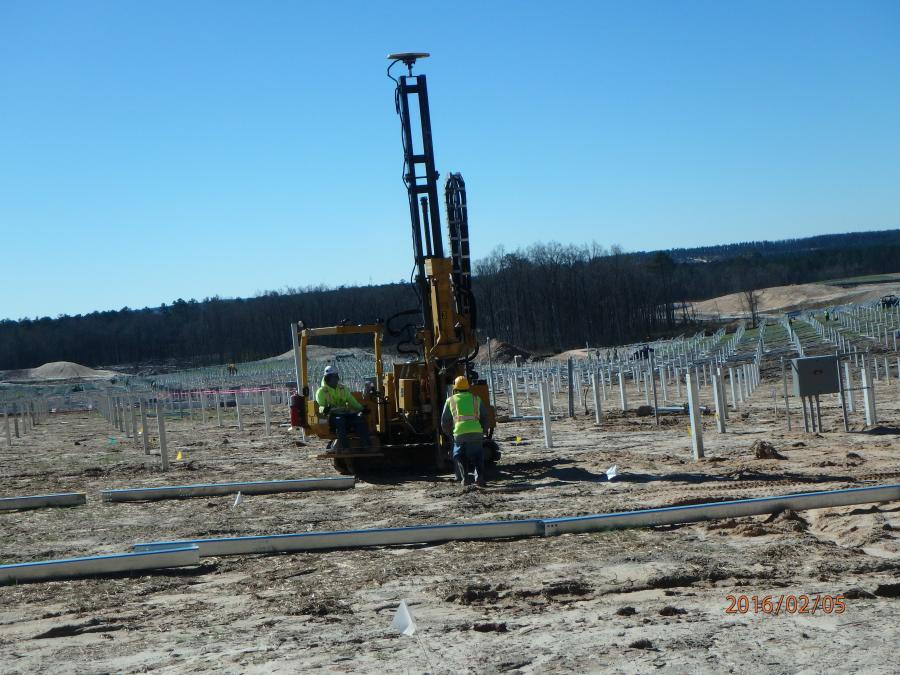 Georgia Power photo The Fort Gordon project will provide a 30-megawatt, alternating current, solar array on the installation, which will be financed, designed, installed, owned and operated by the power company.

Georgia Power is continuing construction on new solar projects at two U.S. Army bases, including Fort Gordon near Augusta. The Fort Gordon project will provide a 30-megawatt, alternating current, solar array on the installation, which will be financed, designed, installed, owned and operated by the power company.

“This is an important project for both the military and for Georgia Power,” said John Kraft, company spokesman. “These definitely represent the largest Georgia Power-owned solar projects to date.”

When completed, the new solar park will be have the ability to provide roughly 100 percent of peak electrical demand for the installation. The $75 million investment will cover approximately 209 acres and feature 137,640 4 by 6-ft. (1.2 by 1.8 m) panels. The project is part of a U.S. Army commitment to the president to secure one gigawatt of renewable energy and sustainability at U.S. Army installations by 2025.

“The Fort Gordon project is well on its way to completion, and by this fall, we expect it to join the Fort Benning project, which was completed at the end of 2015,” said Kraft. “It's very rewarding to see all of the hard work put into these projects come to fruition.”

Kraft said his project represents another expansion of solar in Georgia.

“It's among the first and largest Georgia Power-owned projects, and helps the army meet its renewable energy goals. Plus, we are building the projects to be brought online at or below the company's 'avoided cost', or the amount projected it would cost the company to generate comparable energy from other sources.

“It will not put upward pressure on the rates that our customers pay for electricity. It also diversifies our mix of energy resources, which include nuclear, coal, natural gas and renewables, including hydro, biomass, solar and wind.”

There have not been significant challenges to date, and construction has reportedly gone smoothly.

“Being part of a secure military installation, we have to work around base-access issues, of course, but it has gone well,” said Kraft. “We are finalizing installation work, and are largely into electrical finishing at this point, including connections, wiring, etc.

“Grubbing and grading to clear the land was first, followed by pile driving for the support posts, assembly of the racking structures and then installation of panels and inverters. Work has gone well, on schedule, despite some periods of rain and inclement weather.

“We continue to perform electrical work, and extensive testing will take place during the summer.”

Kraft said that solar facilities are different from building a traditional power plant because it takes a lot of land for a solar facility, but all the panels are essentially identical.

“You don't have all of the different power plant systems to construct,” Kraft said. “It's a very horizontal project. It's all near ground level, whereas most power plants include some vertical element.”

“A typical panel weighs 60 pounds. Safety is very important on any Georgia Power project, so we stress that constantly on the job. The panels and related equipment are trucked to the site and lifted into place, where workers then mount them to the racking structure with a fixed-tilt orientation, generally facing south to capture optimal sunlight across the day,” Kraft said.

Heavy machinery being used on the job includes earth movers, bulldozers, backhoes and graders, along with pile drivers, dump trucks, cranes and lifts. Approximately 137,000 ground-mounted crystalline PV modules are required to complete the project, as well as electric inverters mounted on steel racking structures, cabling, wiring and metering to connect the facility to the electric transmission grid.

The electricity generated by the PV panels will be in the form of direct current (DC). Inverters will be required to perform the conversion of the variable DC output of the PV cells into alternating current (AC) suitable for supplying the electrical grid.

“The Fort Gordon installation cleared and sold the timber on the property,” said Kraft. “Georgia Power conducted the environmental assessment, along with grubbing and grading the site.

In addition, for both safety and security, a chain link fence was erected around the perimeter of the project location with a gate access.

“Constructing more than 130,000 panels across more than 200 acres takes some time. The most-time consuming part of the work has been the civil work necessary to prepare the site for the installation of the racking system. The large expanse of the site includes varying terrains that must to be graded to a precise civil plan. The project has moved well, and is on schedule,”said Kraft.

Fort Gordon, along with the U.S. Army Office of Energy Initiatives, Georgia Power and the General Services Administration, held a groundbreaking ceremony for the solar array in May 2015, near the installation's Gordon Lakes Golf Course. The event was hosted by Major General Stephen G. Fogarty, commanding general, U.S. Army Cyber Center of Excellence and Fort Gordon, along with leaders from Department of the Army, Georgia Power and the General Services Administration.

The U.S. Army and Georgia Power will facilitate the project under a 35-year easement. The U.S. Army will purchase power through a GSA contract with the power company. Fogarty said increasing the use of renewable energy is significant.

“The 3x30 project is just one example of how the Army is strengthening energy security and sustainability at our installations by developing and executing cost effective, large scale renewable energy projects, levering private financing,” said Kraft.

Similar projects were approved for Fort Benning and Fort Stewart. By the time all three projects are complete, Georgia 3x30 will produce approximately 18 percent of the energy the Army consumes in Georgia, according to Jessup.

Officials said Fort Gordon has a place on the grid as the site of a premier power platform for the nation. Power produced by the panels at Fort Gordon will go out to the grid, then on to power customers on and off the installation.

“That is one of the beauties of the way we have been able to structure this partnership,” Jessup said. “What you do here at Fort Gordon will have an impact across Georgia and around the world.”

One of GSA's goals is to ensure maximum sustainability in its efforts, while having minimal impact on the environment. Currently, the administration is working to achieve 30 percent clean power consumption by 2020. Once Georgia 3x30 is fully up and running, energy costs will remain at or below current amounts, guaranteeing customers their rates will not increase.

“These solar projects support the Army and their mission to not only strengthen local Georgia bases as economic and community engines, but also their efforts to further the development of renewable energy and enhance national security,” said Coleman. “We're committed to assisting our customers with all of their energy needs, including providing information and expert advice to help them make informed choices about adding solar, on an Army base or a home rooftop.”

Coleman said, “Every megawatt here that we're bringing online will be done without putting upper pressure on our customer's rates.”

Richard Kidd, deputy assistant secretary of the Army, Energy and Sustainability said, “The Army is looking at renewable energy as a portion of a broader initiative to build energy security and resiliency on our installations.”

In addition to providing cost-effective, renewable energy, solar panels will have other advantages. Kidd described the installation as a “platform of power projection,” ultimately joining others in becoming a more secure and reliant military installation due to having a sustainable infrastructure. At a time when the electric grid is increasingly threatened by people looking to destroy it, the first line of defense for the Army will be at Fort Gordon.

Georgia Power, the largest subsidiary of Southern Company, is one of the nation's largest generators of electricity, serving some 2.4 million customers.

Officials expect the solar project to be ready to produce power by late 2016.