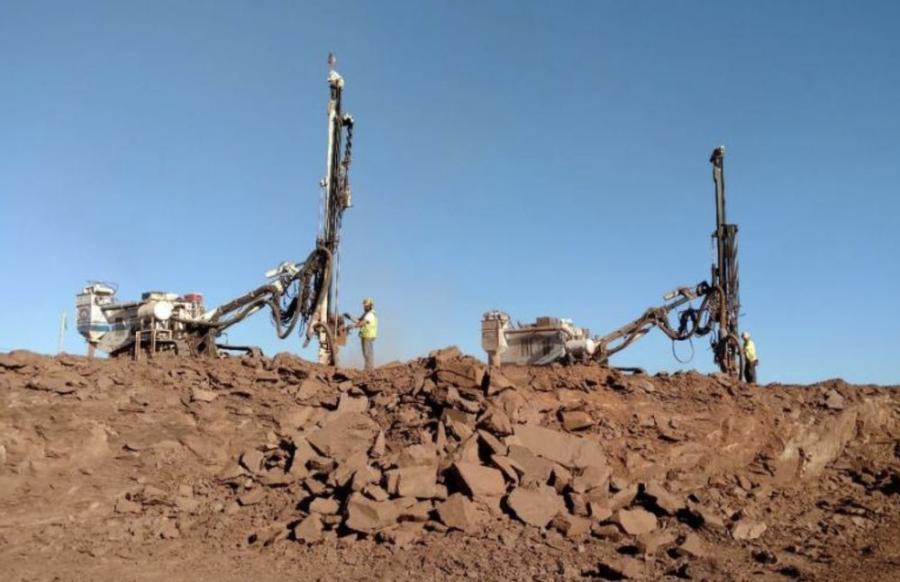 “I just find it real ironic how I’m a hammer operator and my job is to break rocks to a smaller size and that’s what they were using those exact wedges for back in the day,” Brandon Hersey said. (Brandon Hersey photo)

Hammer operator Brandon Hersey likes to keep an eye out for the unexpected find in the Westford, Mass., quarry where he works. So far, in the two-and-a-half years he's been on the job at Graniteville Materials, all he's come up with is junk — empty soup cans and the like — but he's heard of other discoveries, like the smoky quartz gemstone a co-worker recently unearthed.

So, in December, as Hersey operated the excavator breaking up large rocks and saw something shiny, he paid attention. 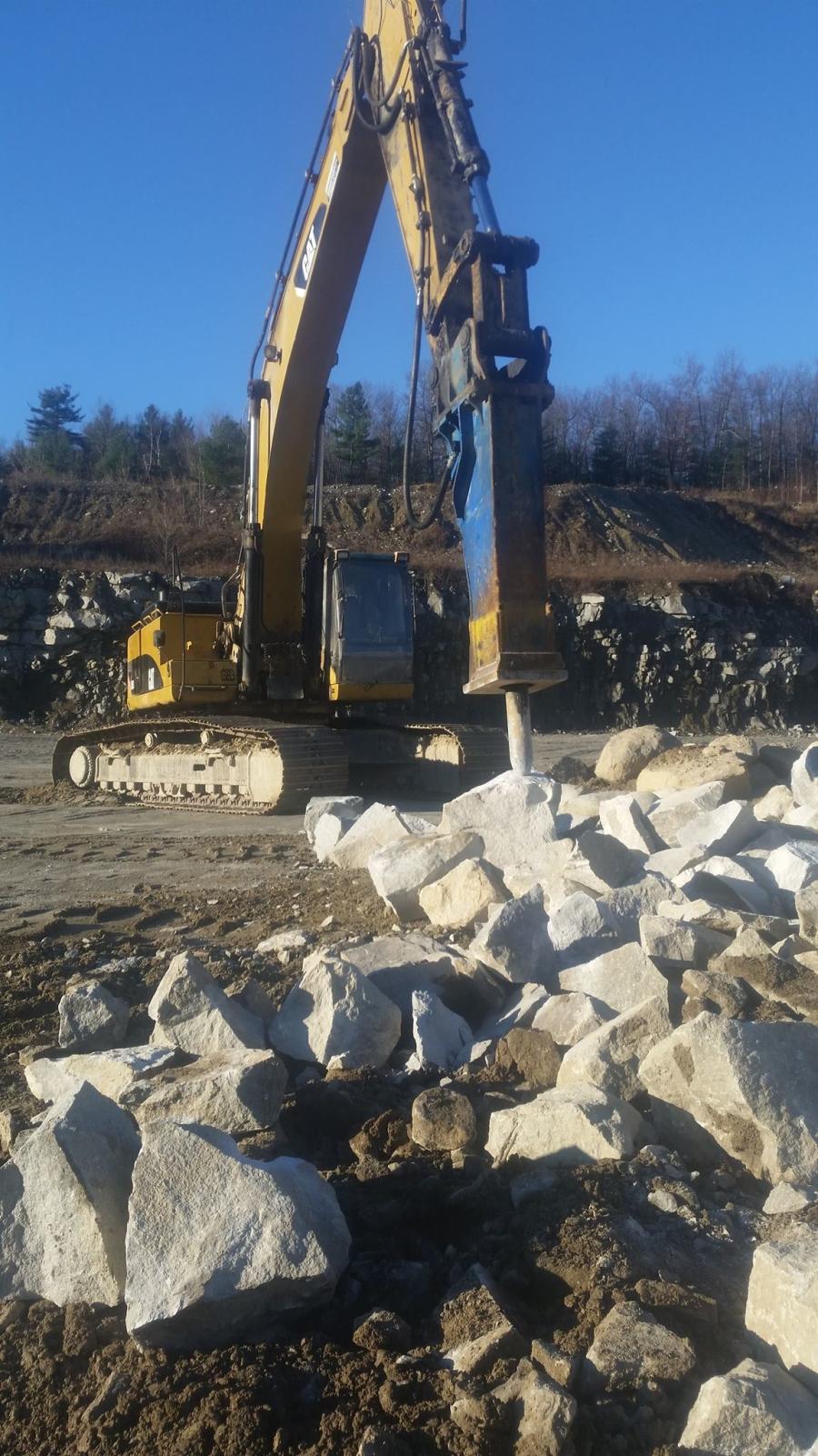 In December, as Brandon Hersey operated the excavator breaking up large rocks and saw something shiny, he paid attention. (Brandon Hersey photo)

"I thought rocks are not shiny," recalled the 23-year old. "My curiosity got the better of me. I took the 345 excavator and broke the rock in two. I thought it was strange there was metal in the rock. I had no idea what they were."

Hersey kept picking at the rock until he could pull the metal free. Then, he knew exactly what he'd found — an old set of tools, known as a plug and feather.

"Plug and feather are basically two wedges, one is a little bigger than the other," Hersey explained. "You put the plug in first and then the feather and you hit it with a hammer. They go right next to each other, almost looks like a ‘V'. The rock comes off in a slab almost. They would break the rocks in half so they would have these huge slabs, 10 feet high, 20 feet long. They could break it down or leave it that size, all depends what they were using it for.

"I just find it real ironic how I'm a hammer operator and my job is to break rocks to a smaller size and that's what they were using those exact wedges for back in the day," he said.

According to Wikipedia, the tools date back as far as ancient Egypt when they were used for quarrying lime and sandstone. The Romans also used the tools.

Hersey's find is apt given the modern version of the technique is credited to a Massachusetts man, also detailed by Wikipedia.

In New England, the plug and feather technique is first mentioned in The New-England Farmer; Or, Georgical Dictionary (1790) by Samuel Deane. Deane wrote: "… another method of breaking rocks, which ought to be generally known, and which sometimes turns out cheaper, is this: Drill two holes in a stone, ranging with the grain, when that can be discovered with the eye. Then filling each hole with two semi-cylindrical pieces of iron, drive a long steel wedge between them. The stone will thus be split open. 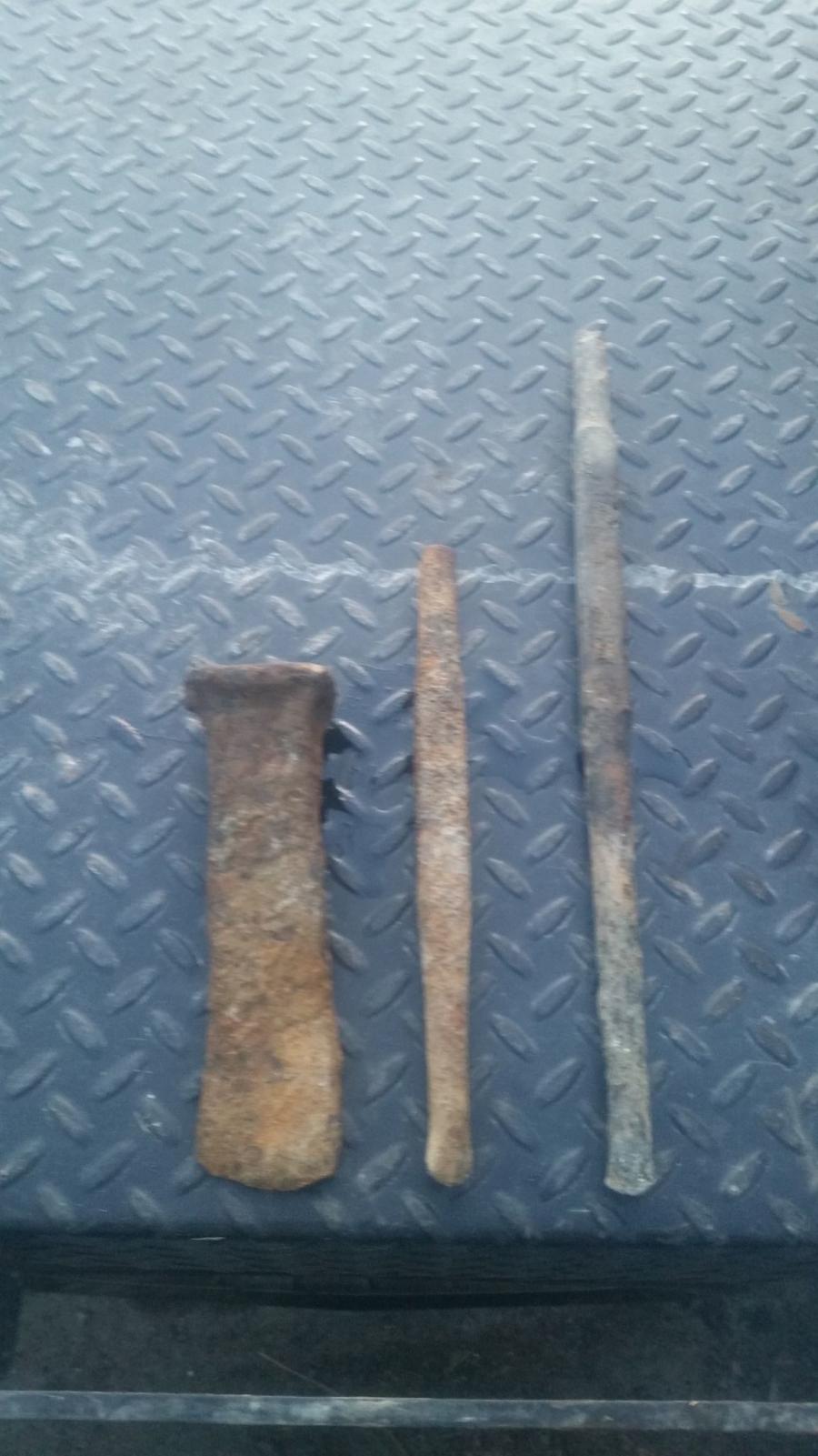 He knew exactly what he'd found — an old set of tools, known as a plug and feather. (Brandon Hersey photo)

"In 1803, Lt. Governor Robbins of Massachusetts was a member of a committee that had been tasked with building a new state prison. In a chance encounter during the same year, Robbins came into contact with Mr. Tarbox, who was using a modified version of the plug and feather method that had been described by Deane. Instead of using only two holes, Tarbox drilled as many holes as were necessary, spacing them six to eight inches apart. Robbins hired Tarbox to teach his technique to the quarrymen at the quarries in Quincy, Massachusetts. Within a year, the price of quarried stone was cut in half. The method spread quickly and became the basis of the modern plug and feather method still used today."

Hersey was delighted with his find and even more so when, the next day, he came upon an equally old hand drill, the tool used to make the plugs.

"I thought that was a real awesome find," Hersey said, noting the quarry has been in operation since the 1800s. "My boss thought it was pretty cool, too. Until this, we've only found snippets and pieces of hand drills. You couldn't really tell what it was. This was the first time we found something intact."

The hand drill called for the effort of two workers, Hersey said.

For now, the tools are on Hersey's workbench. He plans to buy a frame for them with a plaque with a description of what they are.

But has he considered taking them to an antique dealer just to see what his find may be worth?

He's thought about it, he said, but then decided against it.

"I was just afraid the antique dealer might want it worse than I do."