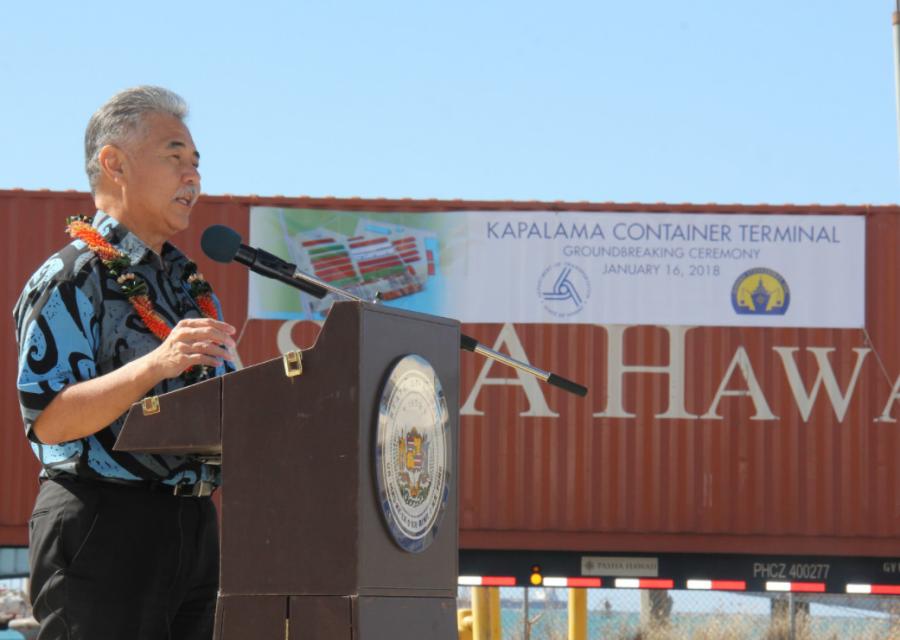 The Kapalama Container Terminal (KCT), the centerpiece of the Harbor Modernization Plan, is maintaining the shipping logistics necessary to sustain Hawaii.

More than 80 percent of all goods consumed by Hawaii residents and its visitors are imported to the islands, and of that, more than 98.6 percent flows through the Port Hawaii commercial harbor system.

“Hawaii's container terminal operations had reached its maximum capacity and the inefficiencies were adversely affecting Hawaii's economy,” said Gary J. North, executive director, Hawaii Harbors Users Group. “Governor Ige was a member of the Legislature at the time, and understands the dire consequences facing our state.”

The Pasha Group, a transportation and logistics management specialist, has announced that it will invest in the most technologically advanced and environmentally friendly vessels to serve the Hawaii and United States mainland trade lane as a result of the container terminal development.

“I'm proud to say the construction of the Kapalama Container Terminal Project is under way, and in four years we'll have a new state-of-the-art cargo facility that will allow us to consolidate cargo operations, enhance operational efficiencies and improve cargo handling capacity,” said Hawaii's Gov. David Ige. “This will support our local economy while ensuring the continued flow of cargo to our communities through this distribution hub.

“In addition to the $448 million that we're investing in the Kapalama Container Terminal project, we've completed several other modernization projects designed to enhance maritime operations throughout the state. These projects have infused more than $140 million into our local economy, creating job opportunities in construction and specialized trades as well as transportation and maritime-related occupations. These accomplishments would not be possible without our private industry partners — including the Hawaii Harbors Users Group and The Pasha Group.”