It's Smooth Sailing on $1B Ship Channel Bridge

One year after the March 2018 start date on Houston's new $1 billion Ship Channel Bridge, workers have finished the drill shaft foundation for the southern main pylon, and were just two weeks away from completing the main northern pylon.

"There's not much to see right now," said Matt Kainer, maintenance and construction engineering assistant director of the Harris County Toll Road Authority. "But we're working towards it. It will ultimately be the southbound lanes built first next to the existing bridge, then we'll shift traffic to the new bridge, demolish the existing bridge, then build the other half right next to it. The first part is to construct the foundation for two main pylons. It's taken us about a year to do those just because they are so numerous, so large and so deep. On the approaches, we are actually out of the ground and have columns and caps coming up on the north approach." 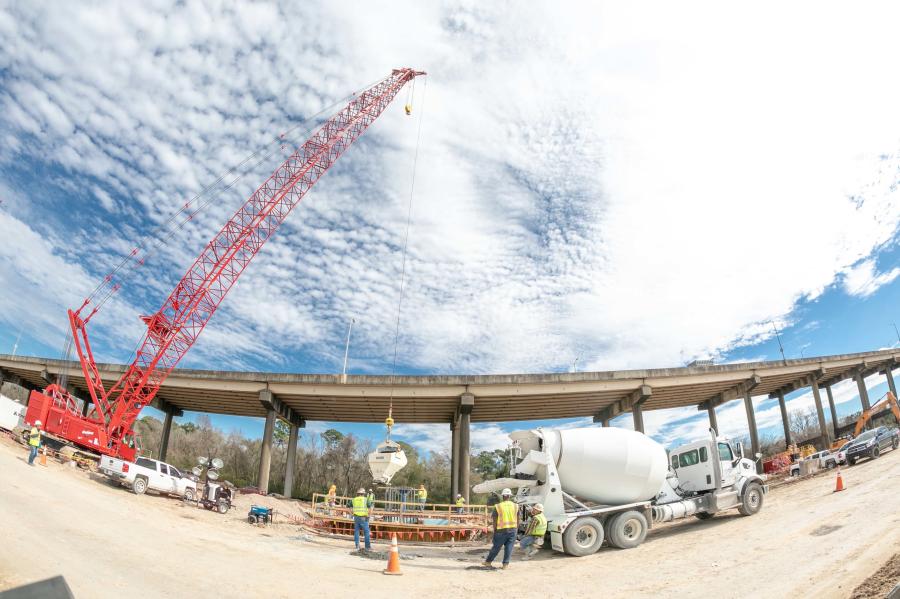 The bridge, scheduled for completion in 2024, is the largest infrastructure project ever undertaken by the Harris County Tollway Road Authority and expected to ease congestion, improve safety.

"Our existing bridge is two lanes in each direction with no shoulders," Kainer said. "We regularly run it to capacity and have congestion and back ups. And when there is an incident, it greatly impacts traffic because there is nowhere for them to go, no shoulder to pull off to. If there is a wreck severe enough, it's not uncommon to shut down one or both lanes of travel."

The new bridge has a clear span link over the ship channel of 1,320 ft. and will feature four lanes in each direction with 10-ft. shoulders. The main span itself is precast segmental and will be cast on the property adjacent to the job site. The actual segments will then be assembled in the air to form the main span. The approach structures are traditional TS girder construction — precast concrete girders with cast-in-place bridge decks.

"The new bridge is similar to the existing in that it is a segmental bridge, however, the new bridge cables, which allows us to have longer clear span, stay out of the channel," Kainer said. "The old bridge was segmental, but it was cast in place. They moved the forms out and cantilevered them out from the main piers, whereas we are casting on the ground and erecting into place."

The project required custom designed winches that will be mounted to the bridge deck for installation of the segments. 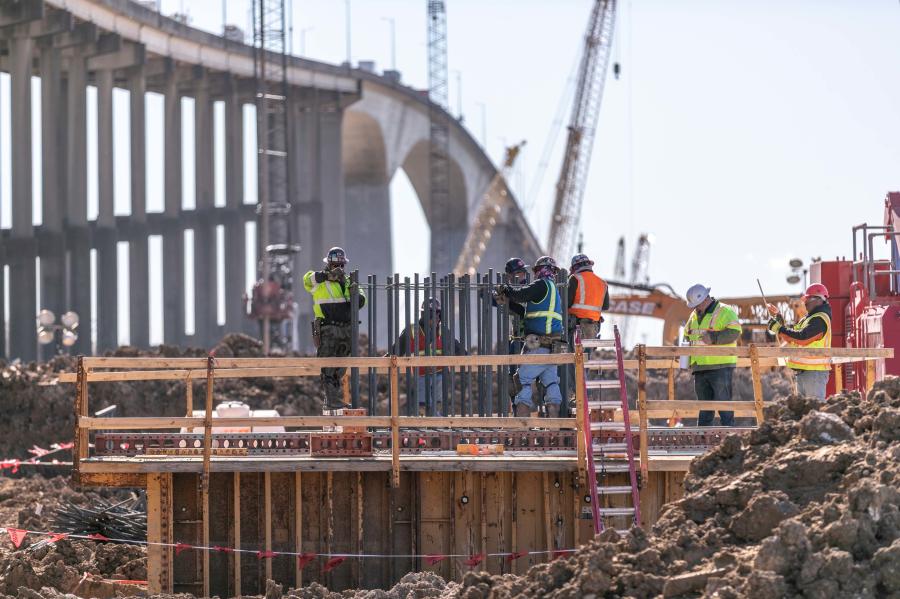 "When we start, we'll be working over land, Kainer said. "First we have to construct the pylons and then we'll start from the pylons and work our way out in what is called balanced cantilever erection sequence. We'll erect one segment on the pylon and then on the other side to where we're always working one piece on each side at a time. For the other part, the segments will be transported onto a barge that will go out into the channel and they get lifted straight up by those winches from the barge. While we have the existing bridge in place, there really is very little interaction or impact with it and little to no impact to traffic."

Crews are working in the casting yard with three Italian-built cranes, a 110-ft. rail-mounted transporter that will pick the segment from the mold, and two wheeled Gantry cranes that will pick up the segments and put them in storage until it is time to erect. Other cranes on site include Leibherr 1300 power cranes used to lift the cages for the drill shafts.

"We're using long-line match casting and so the way the process works, the 1320-foot span, just clear span, will be cast in 12-foot segments all the way across. They cast the first segment, staying in casting bed, and move to next and it is cast right up next to it. That will ensure that when we go to fit those together in the field they fit exactly together. That whole casting bed itself is really one big machine, hydraulically powered. It's a pretty intricate operation."