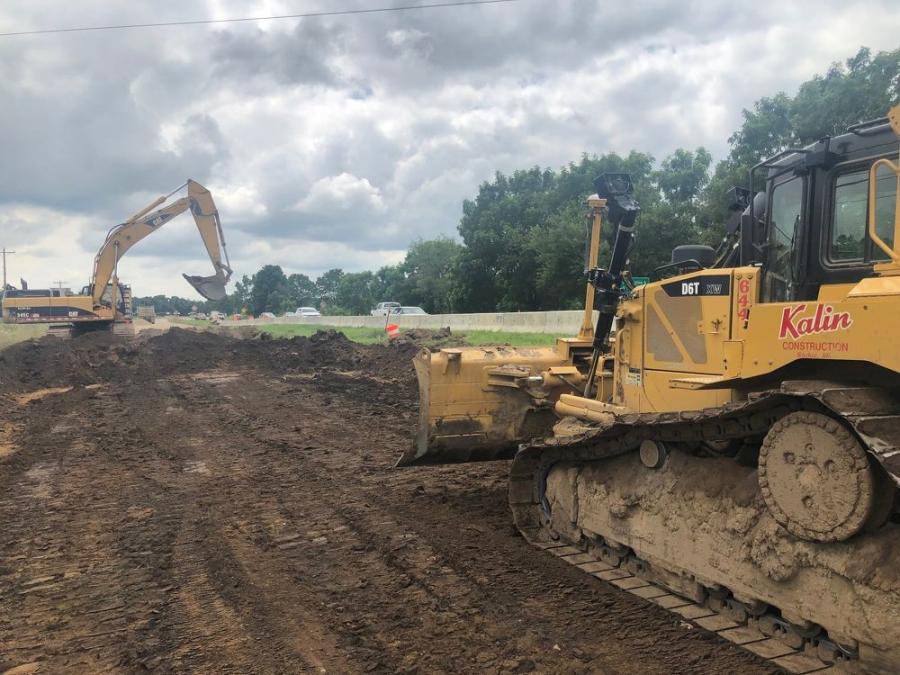 “The meat of the job is next year and we’re doing about 20 percent of the project this year,” Project Manager Matt Kalin said. “We’ll have more equipment onsite in 2020.” (Kalin Construction Company Inc. photo)

Kalin Construction Company Inc. (KCC) crews started work on the Michigan Department of Transportation's (MDOT) $20 million reconstruction of a section of U.S.-131 last May, which is being rebuilt from William R. Monroe Boulevard to north of Hoffman Road.

The two-year project, which should be completed by Fall 2020, also includes reconstructing the U.S.-131/M-60 interchange south of Broadway Street and improving the U.S.-131 bridge deck over the Rocky River.

The reconstruction covers 2.3 mi. of highway (six lanes wide, two through-lanes and a left turn lane in each direction) in Three Rivers (St. Joseph County) along a heavily-traveled commercial corridor of the city, which is located in southwestern Michigan near the Indiana border. This section of highway was built in 1953, and average annual daily traffic is between 12,000 and 20,000 vehicles.

Safety concerns for motorists, pedestrians and cyclists are a key element of the project. 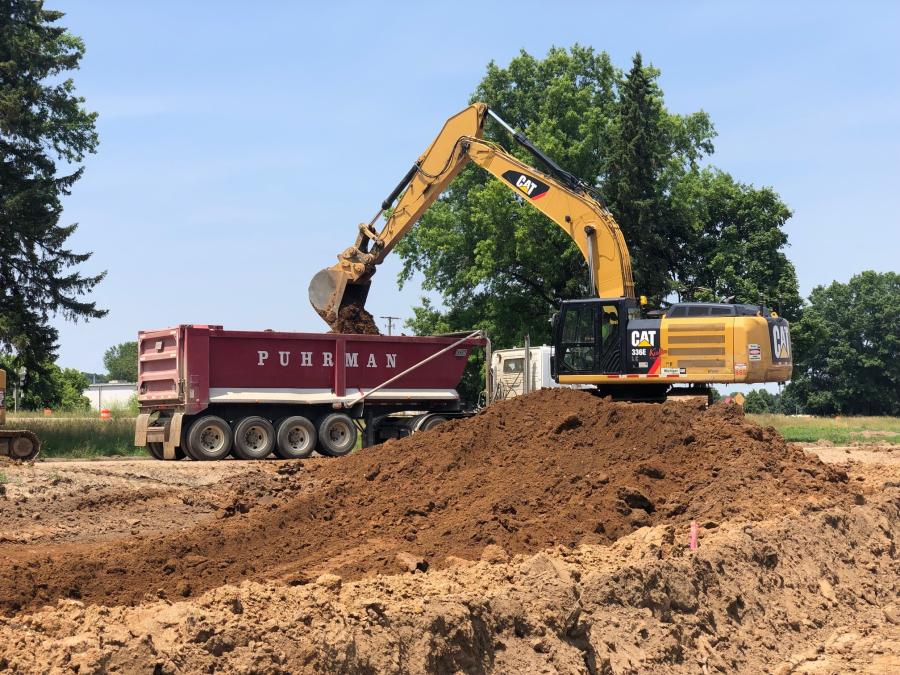 "The new lane and intersection configurations will improve operations and traffic flow, reducing left-turn crashes and overall crash severity along the U.S.-131 corridor," said Nick Schirripa, MDOT's Southwest Region communications representative. "Shorter pedestrian crossings and additional facilities will improve access and safety. Currently there is just so much concrete with all the through lanes, turn lanes, shoulders and median that it can be really daunting for drivers trying to make a left turn from or onto U.S.-131 in this stretch. And even more so for pedestrians trying to cross the highway. The reconstruction will eliminate some of that, create safer turning movements and pedestrian facilities, vastly improving safety and efficiency at several intersections.

"MDOT designed the project in conjunction with the city," Schirripa added. "Over the course of a decade, MDOT added pieces to the project on the advice of city leaders and community stakeholders to make sure we were addressing the corridor holistically. Pedestrian paths and access, considerations for heavy commercial traffic and specific traffic patterns, and the needs of commuters all were taken into consideration when redesigning this corridor."

The design addresses some key points.

"Some of the challenges we faced included maintaining critical commercial access points while rethinking key U.S.-131 intersections at Hoffman Road, West Michigan Avenue [the east leg of M-60] and the west leg of M-60," Schirripa said.

"The reconstruction also will add a series of indirect left turns more commonly known as ‘Michigan lefts,' intended to reduce the number of conflict points along the new boulevard section. All of these safety improvements will be made while maintaining efficiency and access."

To minimize the impact of construction, access to businesses is being maintained as well as ensuring the road is open to motorists and pedestrians.

"Throughout construction, MDOT engineers, technicians and inspectors working in concert with our contractor will communicate plans and accommodate the needs of business owners and stakeholders whenever possible," Schirripa said. "One lane of traffic will be maintained in each direction throughout the two-year project, and detours will be posted during intersection reconstruction."

So far Kalin Construction crews have completed the following: Temporary widening and crossovers for maintaining traffic, placing the aggregate base on the northbound and southbound lanes, reconstructing the intersection of Hoffman Street and northbound 131, placing an epoxy overlay and substructure patching on the Rocky River Bridge and dealing with various storm sewer runs throughout the project. 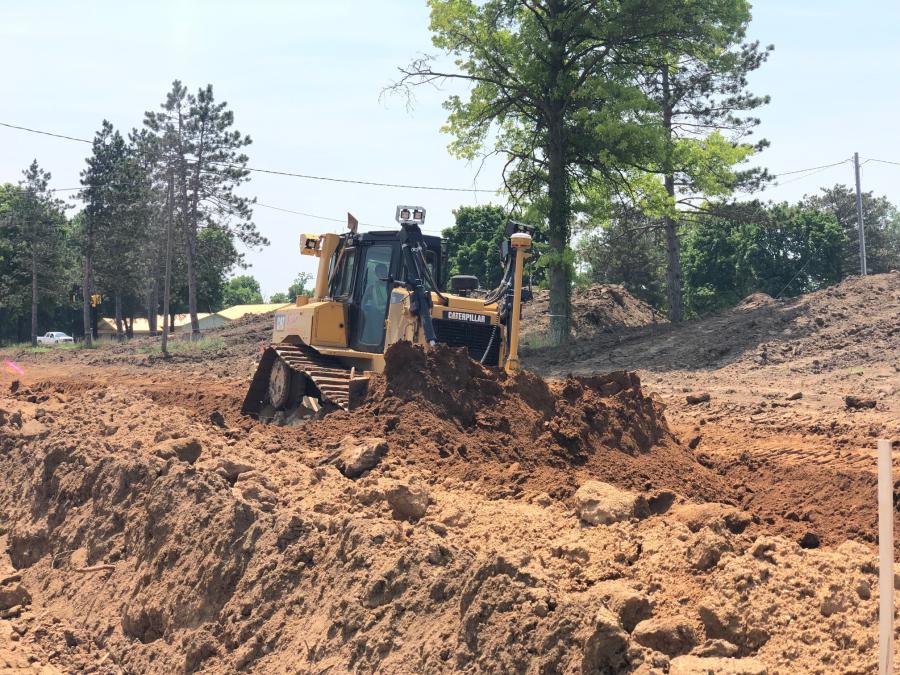 "Some of the challenges in this project so far have been dealing with the very wet conditions this spring and working this project in phases while maintaining traffic," said Matt Kalin, KCC's project manager. "The project was awarded on April 23 and we started work in early May, so we had time to plan the schedule. We have been working with all the utilities as they relocate cable and fiber. Our main challenge when it comes with the utilities is determining whether the cable is actually live or if it has been abandoned."

MDOT has allowed KCC to use a green space in between the existing southbound 131 and westbound M60 ramp to use as a laydown yard and set up a field office.

"MDOT has been really great to work with," Kalin said. "Everyone from the field inspectors to the office support staff have been working with us to try and complete the project. While I would not classify this as an urban area, there are several businesses along the route. There is little foot traffic from pedestrians.

"Our big concern is to monitor the traffic control devices and make sure it is very clear to the motoring public where they should be driving and where they shouldn't. This helps us maintain a safe working environment for all of our crews on-site. This project was bid with the intent of an expedited schedule, which means working six days a week, even Sundays if necessary, if we lose a day due to weather. We don't anticipate doing any work in the winter."

The reconstruction of the U.S.-131/Hoffman Road intersection was completed in eight working days.

"It took a lot of coordination and teamwork with all the subcontractors," Kalin said. "Including Rieth Riley [for HMA], Martin J. Concrete and Severance Electric to get in and complete all the work in the intersection. The old intersection is being demolished in phases and we are targeting for late October to complete it."

Work on the reconfiguration of the U.S.-131/M-60 interchange is progressing well and is based on eight stages that are taking place in 2019 and 2020.

2) reconstructing the south end of project from Broadway to POB on northbound, building a new southbound 131 south of Broadway, rebuilding northbound on each side of the Rocky River Bridge, rebuilding the Hoffman Intersection, completing the northbound bridge work (constructing all through leveling course);

3) reconstructing the south end of project from Broadway to POB on northbound, rebuilding southbound on each side of the Rocky River, completing the southbound bridge work, demolishing ex southbound 131 and various M60 slip ramps — all through leveling; and

4) top course paving and entire job and striping for the winter months.

1) Reconstruct northbound 131 from Broadway to Hoffman;

2) reconstruct southbound 131 from Broadway to Hoffman;

3) complete the median work; and

"There are no major challenges, other than it's just a lot of work," Kalin explained. "Trucking has been an issue as there is so much construction work in the state, and we have a trucking bottleneck. There is a lot of material to be hauled in and out, and it all goes on trucks."

The 2020 construction, which will start in late April or early May depending on the weather, will focus on the highway reconstruction.

"Starting in early 2020, we're going to close northbound 131 from Broadway to Arnold Street and reconstruct that section," Kalin said. "Then we'll put the traffic on the new side do the same thing on the southbound side. We will have two crews on-site, with one working on removals ahead of the crew completing the reconstruction."

It should take about one month at most to remove the northbound M-60 ramp to West Michigan Avenue.

"It's just not that big," Kalin said. "We basically just remove it and a new one will be brought in with the westbound lanes."

The shared use path will be constructed with the northbound section of new 131 in 2020. 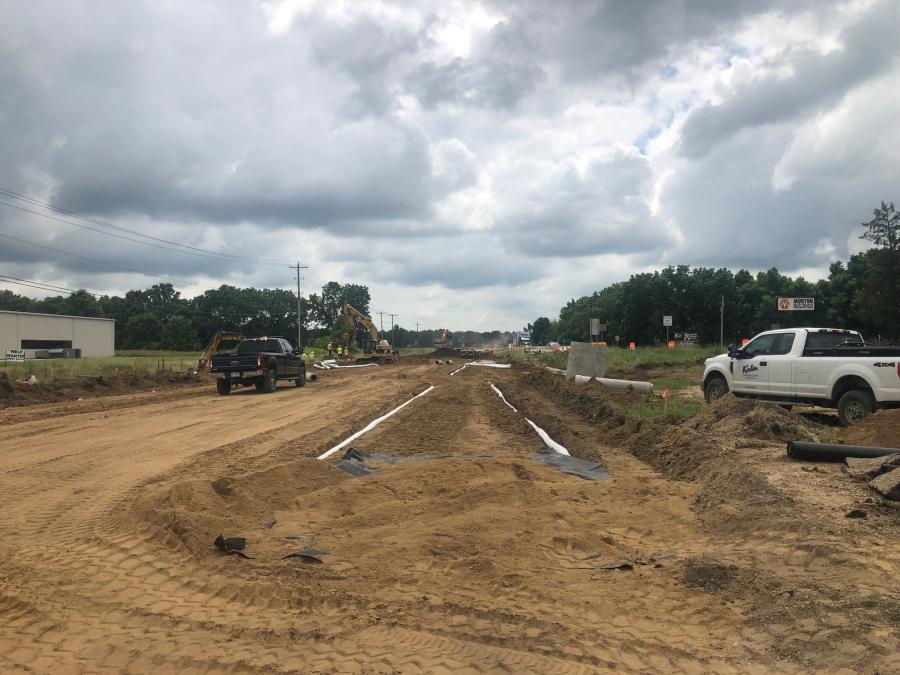 "Andy is there every single day running it from the boots on the ground," Kalin said. "And I'm dealing with all the subcontractors and scheduling of materials — the project management portion of it. We're also doing all the surveying on the project. Andy and Jason bring a lot of experience to the table."

"The concrete will be hauled off and crushed into 21AA for the project," Kalin explained. "HMA is being hauled to Rieth Riley for use in their asphalt production, and the dirt is being hauled to Waste Management for use to build a cell for the landfill. Recycling is very important to our company — not only because it's good for the environment, but it provides us a competitive advantage over our competitors. We own two crushing plants that produce aggregate needed for our projects."

Peak days have seen up to 15 KCC and subcontractor employees onsite and that number should double by next year. Subcontractors working on the project include: Rieth Riley for HMA; Grand River Construction for bridge work; Severance Electric for signals; Martin J. Concrete for concrete; S. Hayes for seeding; PK Contracting for pavement markings; and Give Em a Brake Safety for traffic control.

"We have an excellent team of subcontractors that bring their expertise to the different aspects of the project, and I couldn't be happier with the team," Kalin said. "We truly have some of the best in the state. All the team members have been doing what has been required to maintain the project schedule."

"It's mainly dealing with oil changes, cutting edges and those type of things," said Kalin. "There's nothing particularly special about the work we're doing as far as wear and tear, and repairs are done relatively quickly. We have two mobile field mechanics and can use a Cat or AIS mechanic on-call should that be necessary. The meat of the job is next year and we're doing about 20 percent of the project this year. We'll have more equipment on-site in 2020."

KCC's fleet consists of about 100 vehicles and pieces of equipment and keeping it in tip-top shape is critical.

"We rely on our operators and field employees to do their inspections and make us aware of any kind of mechanical issues that is going on with the equipment," Kalin said. "We also perform annuals on the equipment throughout the winter when it is back at the yard."

KCC purchases and rents equipment from Michigan Cat and AIS Construction Equipment, with both dealerships located in Grand Rapids.

"On this project they are providing parts and service as necessary," Kalin said. "We expect our dealerships to provide us with equipment and service at a good price, and to be fair with us. We own the majority of our equipment and when we want to buy a piece of equipment, they're there for us and usually get it pretty quickly."

Kalin has no doubt that the crews will meet all of their benchmarks.

"The work is progressing as anticipated," he said. "We bring all the lessons that we've learned from 40 years of being involved in civil roadwork, and that's why we're able to do it competitively and be around. A project may appear to be simple, but we never take anything for granted." CEG