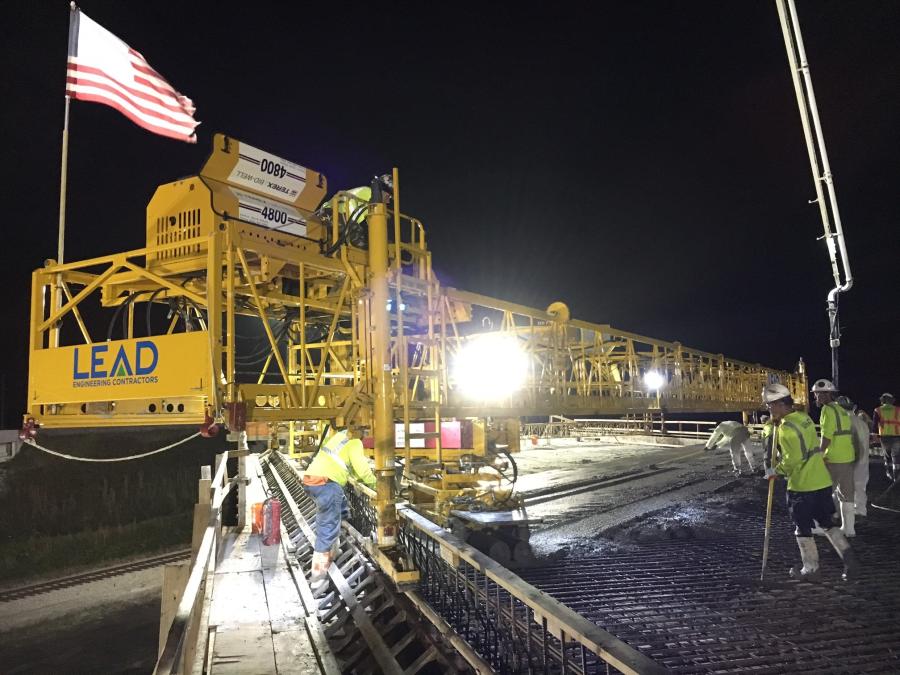 To minimize inconvenience to travelers, concrete pours were conducted at night between 1 and 9 a.m.

The $13.46 million re-decking of four bridges along Interstate 95 in Port St. Lucie at Glades Cut Off Road (County Road 709) and Ten Mile Creek (just south of Okeechobee Road/Exit 129) will be completed in weeks, much to the relief of motorists that are now able to enjoy a smooth ride.

The Florida Department of Transportation awarded the contract to Lead Engineering Contractors LLC (LEC) in March 2017, with the work starting on July 10 of that year.

The bridges, three lanes in each direction, were built in the 1980s. The two bridges at Glades Cut Off Road (478 ft. long) are adjacent to each other with 60 ft. of open space separating them. The other two spans, crossing Ten Mile Creek, are 3.5 to 4 mi. to the north, with the southbound bridge being 894 ft. long while northbound stands at 684 ft. long. 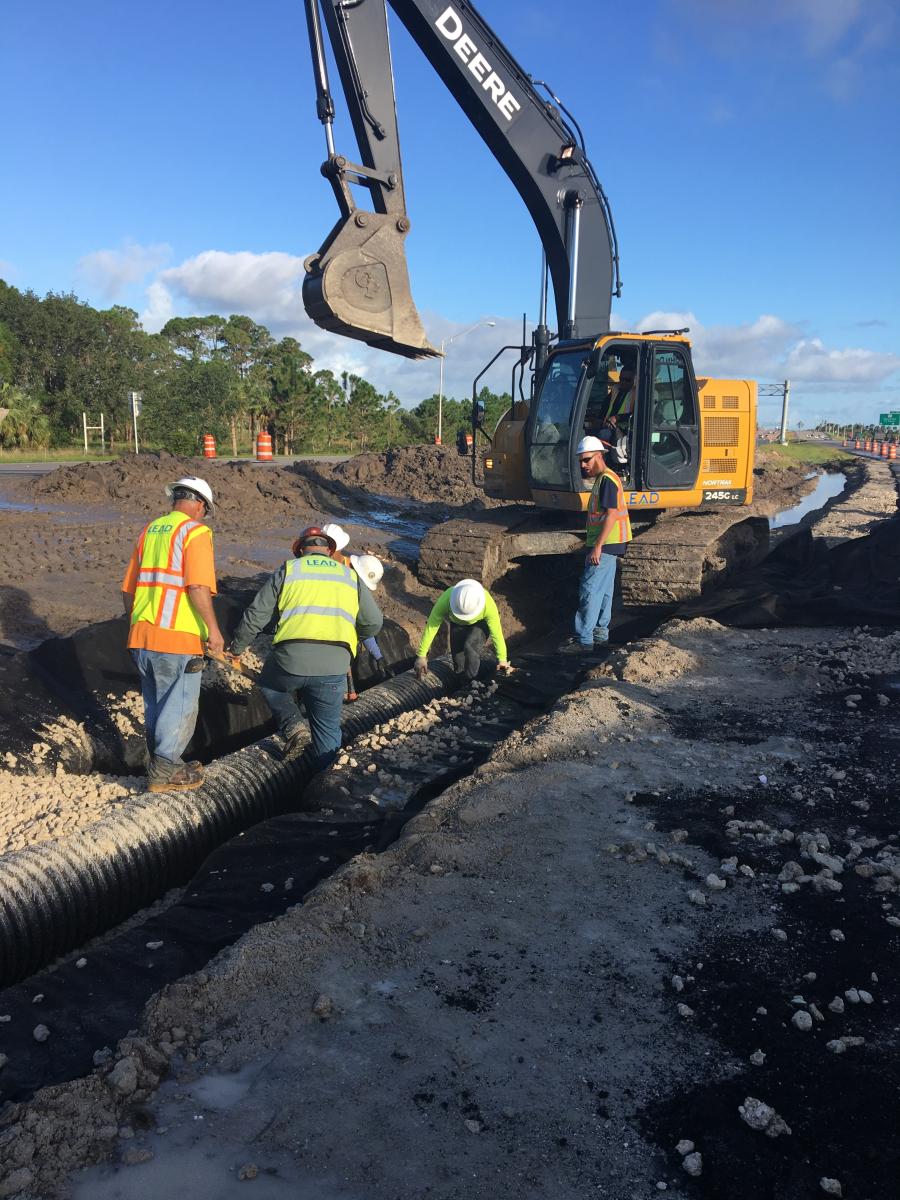 The work also includes milling, resurfacing and re-striping of I-95's approaching and departing lanes for each bridge deck. The bridges over Glades Cut Off Road span FEC's Railroad mainline track. Planning for the re-decking, which is being funded by FDOT, began several years ago.

"The super structure was constructed with 3.5 inch precast panel with a 4.5- to 4.75-inch CIP topping system," said Kenzot Jasmin, P.E., FDOT consultant management. "This non-rigid system is not fully composite with the girder and allows for rotation and deflection of the bridge deck, which has caused severe cracking and spalling of the bridge deck affecting the rideability and the safety of the travelling public. Additionally, the heavy truck traffic on I-95 is further aggravating the cracks, degrading the overall system. Deck replacement is the most efficient way to overcome this issue."

Based on a 2018 survey, nearly 1,500 cars and trucks cross the bridges daily. The re-decking plan was designed by Stantec, and the design and engineering challenges were considerable.

"This included construction over a railroad, securing environmental permits, dealing with various utilities, MOT on I-95 and CR 709," Jasmin said. "The construction is taking place above the environmentally sensitive Ten Mile Creek, and coordination with the U.S. Coast Guard and county and city officials was needed to get everything in order to minimize the impacts."

Thomas B. Reynolds P.E., FDOT district structures maintenance engineer, estimates that the new deck will extend the life of the bridge by another 50 years. "The substructure and superstructure are in good condition," he said. "The new deck is a conventional design that will carry the required truck loads."

Speed limits on the north-south lanes have been reduced from 70 to 60 mph, and to aid construction efforts, traffic is reduced from three to two lanes at the Glades Cut Off Road overpass around-the-clock in order to facilitate completion of the bridge deck. Several exit and entrance ramps were closed nightly during the milling and resurfacing operations with detours to minimize inconveniences. 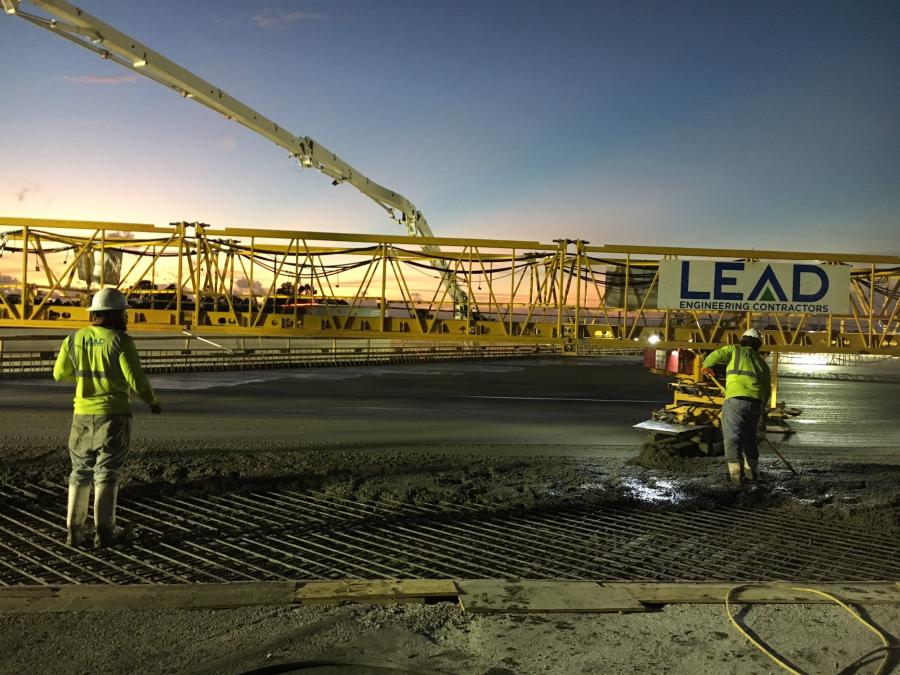 The remaining work has Lead Engineering crews completing several punch list items, including minor corrections and painting the lane lines. The work had crews engaged in day shifts, saving for the concrete pours that were done at night, usually between 1 and 9 a.m.

"A major challenge was dealing with traffic when we were switching traffic between the northbound and southbound lanes for the Glades Cut off bridges," said Uriel Lombardo P.E., Lead Engineering's senior project engineer. "As far as the beam demolition, everything was performed by hand. The decks consisted of precast concrete panels with a topping slab. Part of the demolition entailed saw cutting on the edge of the concrete beams to remove the panels. We had sufficient time to plan the project and develop the schedule, and we revised it as the construction proceeded."

The Glades Cut Off bridges were above road lanes and mainline rail track owned by FEC.

"We kept the railway informed of the operations," said Lombardo, who noted that false decking was installed on all the bridges to prevent debris from falling down into the water and the roads and track. "We didn't do any physical work around the railroad — it was all overhead."

LEC established a field office off-site, and it set up a materials/equipment yard on a section of median along I-95. Concrete for the new deck, provided by Titan Florida, was scheduled a week or two in advance, and sometimes monthly. 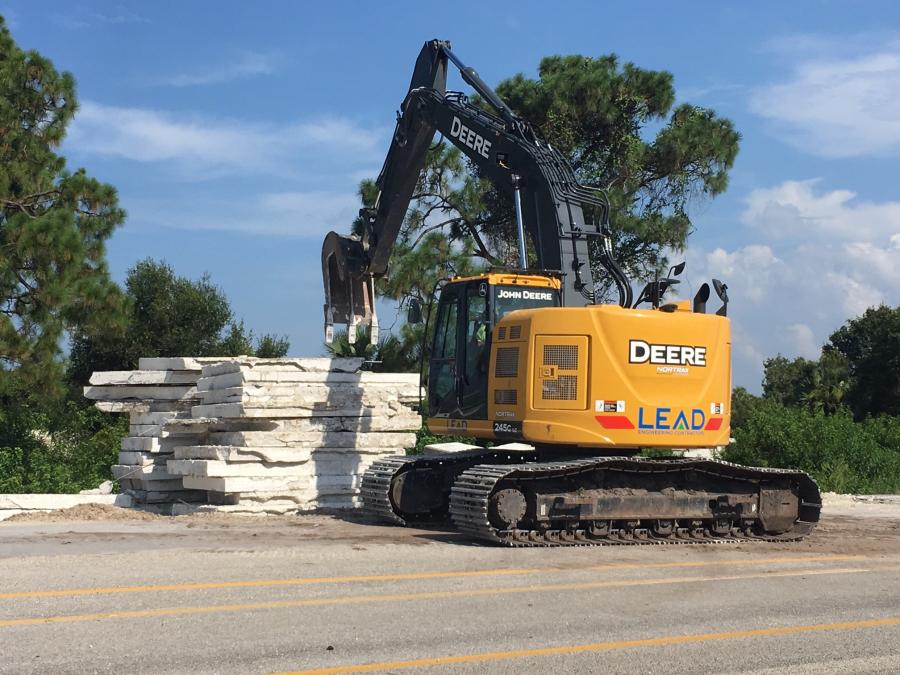 The overlaps between the NB and SB lanes lasted for about one month. After the slabs were cut for the deck removal operations, the pieces were removed by an excavator fitted with a slab crab that easily grabbed the larger pieces. According to Lombardo, trucking was provided by local companies which disposed of the concrete, taking some debris to a nearby recycling center. The plan of attack was based on removing the deck for four spans at a time, and pouring concrete for three of them while the deck removal pressed forward.

"When we were working over the creek, we couldn't put any equipment underneath to do the pours — that's why we did three spans at time," Lombardo said. "We had pumps on either side of the bridges to do the pours. It was very much a repetitive operation. The only bridges that we poured from the bottom were at Glades Cut Off Road because we had a road underneath it. We were able to stage the pumps in the median and feed them with concrete."

The northbound Ten Mile Creek bridge pour was a challenge due to a 7.5 percent cross slope on a radius. "We could only access the bridge from the top and the concrete tended to move due to the cross slope," Lombardo said. "To keep it in place and level, we poured the deck using a Bid Well machine and we reduced the water-cement ratio to prevent it from moving." 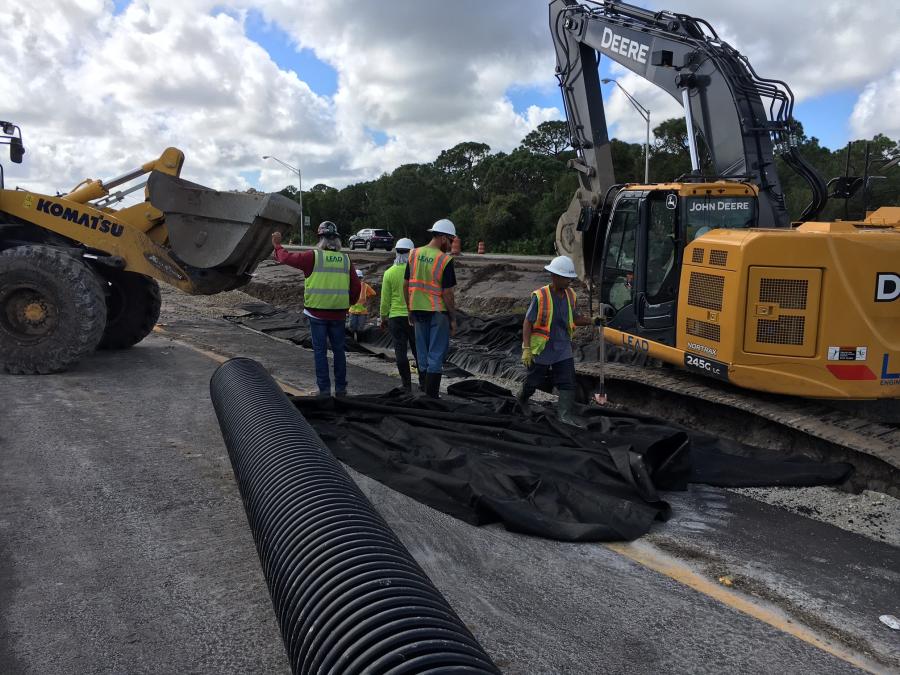 "We typically had one dozer, one excavator and one loader at a time," Lombardo explained. "We didn't have a need to have multiple pieces. There weren't many wear and tear issues, just minor repairs for hoses and hydraulic leaks. When a piece of equipment had to be replaced, the rental companies swapped it with another piece of machinery."

For the most part, LEC rented equipment from Blue Line, now owned by United Rentals, as well as Sunbelt Rentals and Neff Rental, also owned by United.

"They would send in mechanics pretty much when needed," Lombardo said. "We would tell them what size and type of equipment that we needed and they would send it out."

With project completion in sight, Lombardo is proud of the effort of the crews.

"We're very pleased with the final product — the rideability of the new decks and the final finish surface. We did a very good job in giving FDOT a delivered project, putting in a lot of attention into the details. It was a work in progress and we had a lot of experienced crew members as well as new ones that we trained on the job. The new men were not familiar with the construction industry, but they learned quickly and some of the guys are still with us." CEG