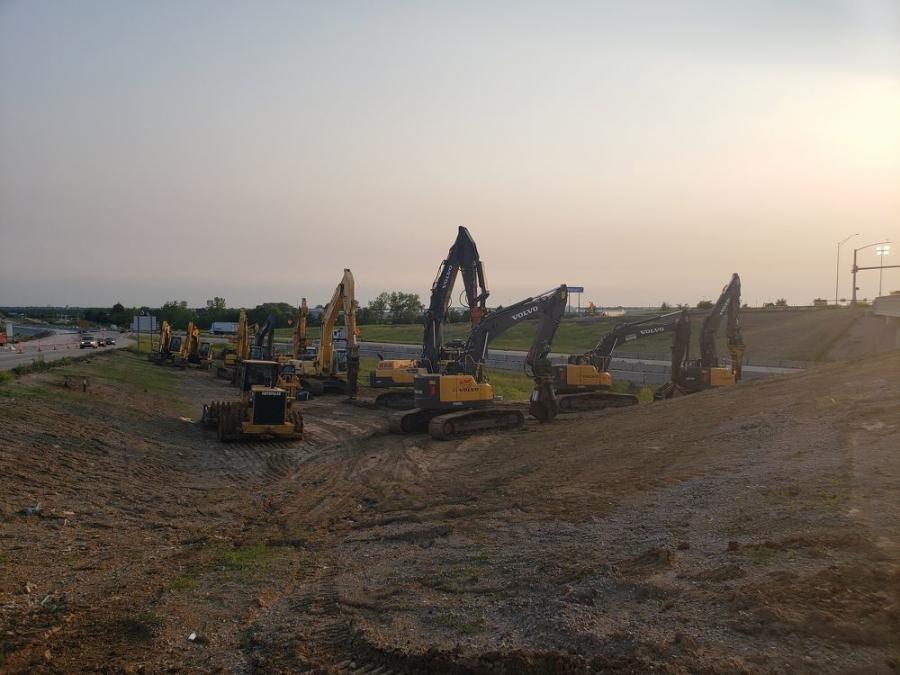 The biggest earthwork portion of the project was removing dirt from the I-35 northbound on-ramp at the interchange and placing it as fill where widening was needed on the northbound off-ramp.

A major Kansas contractor is quickly building a replacement for a key interchange in Liberty, Mo., a northeast suburb of Kansas City, with high hopes that the project will be open to traffic by Labor Day weekend. 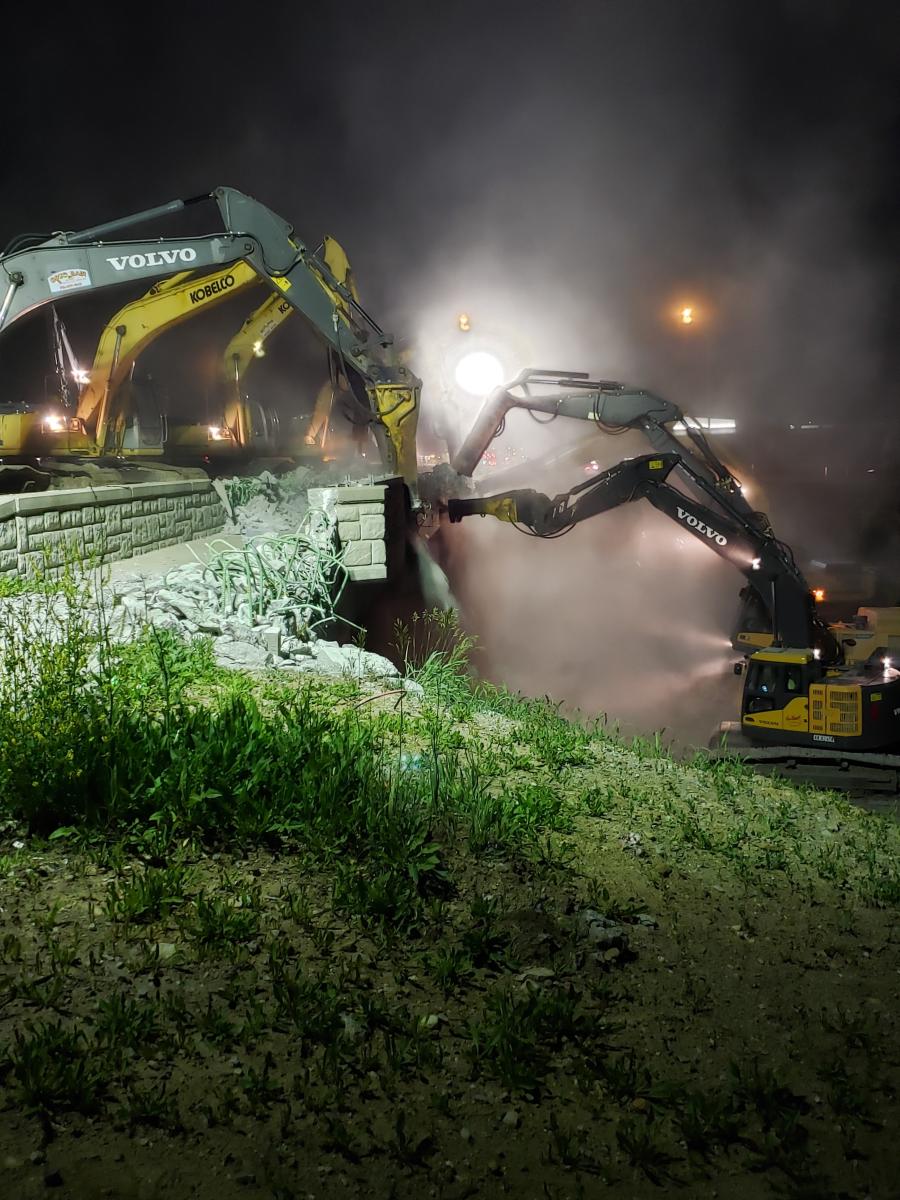 Increasingly heavy traffic at the intersection of Interstate 35 and state Route 152 led Missouri's Department of Transportation (MoDOT) to contract with Miles Excavating Inc. to oversee the $30 million project, which began in the late winter. The home base for Miles Excavating is just across the state line in Basehor, a suburb of Kansas City, Kan.

Earthmoving began at the site in early March. The biggest earthwork portion of the project was removing dirt from the I-35 northbound on-ramp at the interchange and placing it as fill where widening was needed on the northbound off-ramp.

By the end of the first weekend in June, crews had demolished the 52-year-old Rt. 152 bridge over I-35. Since then, efforts have been ongoing to make additional improvements to the current interstate ramps around the bridge, along with street widening on Rt. 152 and Kansas Street, as well as the addition of turn lanes and bicycle/pedestrian pathways.

A great deal of the contractor's energy and resources are currently being put into the main components of the work: Building a set of two bridge structures that will move traffic more efficiently through the corridor. Designs call for a capacity of 11 lanes, three more than the narrow ones that had been operating for several years on the old bridge structure.

The goal for Miles Excavating and MoDOT is to have the new spans open to traffic by Aug. 30. The company was given 108 days from June 3 to finish this key part of the contract in order to meet specific incentives, but Mark Daulton, a resident engineer of MoDOT, said the contractor is intent on completing the two spans in 88 days — in time for the holiday traffic. 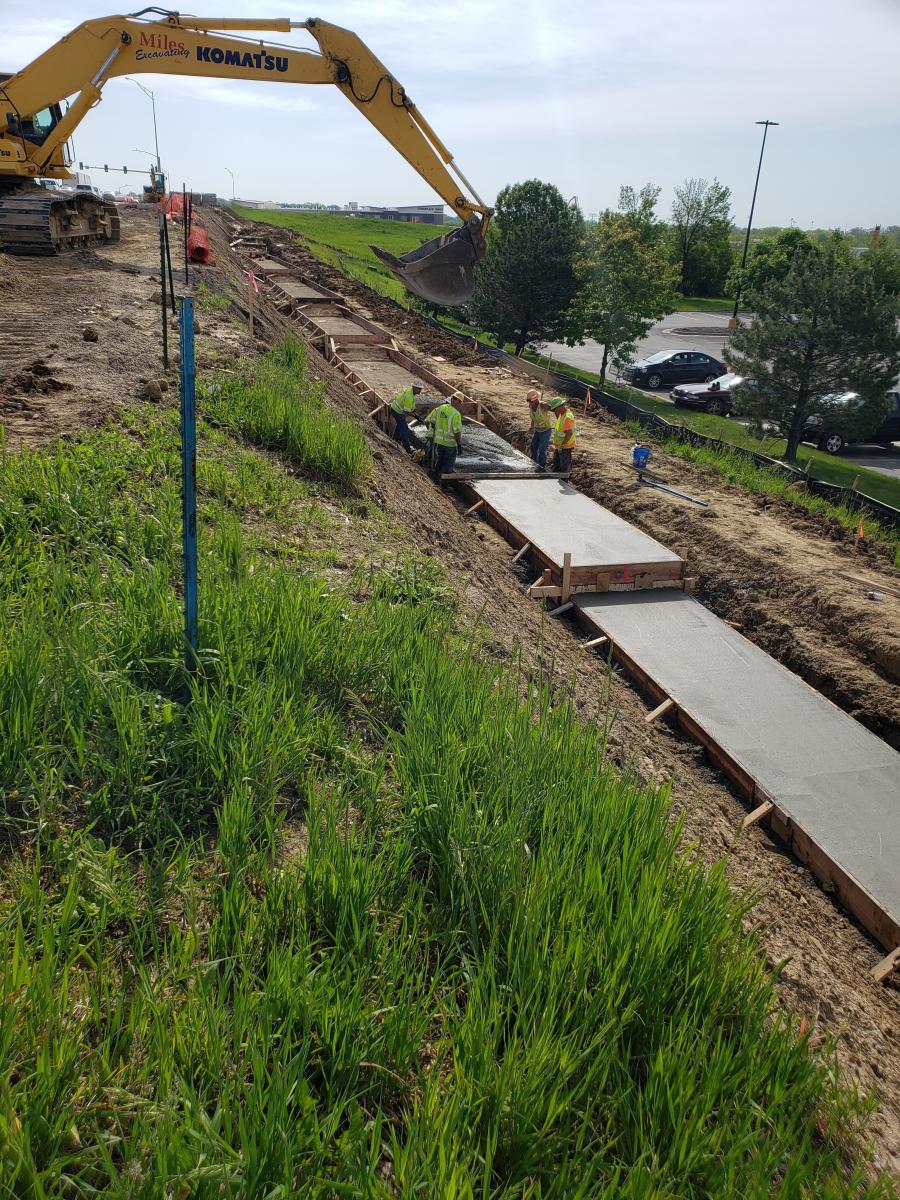 Interstate 35 bisects the central United States from Mexico to near Canada and is a major trucking thoroughfare between Kansas City to Dallas in the south and to Minneapolis in the north. The western edge of Liberty, bordering Kansas City to the west, is where I-35 intersects with Missouri Rt. 152.

Rt. 152 flows from the Kansas border east through northern Kansas City before it becomes Kansas Avenue in Liberty, just west of the interchange.

"There, it becomes the primary east-west connector between I-35 and I-29 in northwest K.C.," Daulton explained. "Along with that, I would say that within the last two decades there has been a tremendous amount of growth along 152 in that part of K.C. and in Liberty on either side of I-35. Referred to locally as Northland — everything north of downtown and the Missouri River — it is undergoing a great deal of development."

The traffic generated by the Rt. 152 corridor also has grown exponentially, causing long lines of congestion approaching and passing through the I-35 interchange. It is hoped that the redesign of the interchange will help alleviate the problem.

MoDOT designers decided to demolish the old bridge, creating the inevitable headache-inducing traffic detours around the intersection, before beginning construction on a large bridge with eight conventional lanes.

In addition, Miles Excavating is building a second, smaller bridge adjacent to the first which will carry contra-flow lanes eastbound over I-35, to the left of the westbound traffic on the bigger structure. The small overpass's far-right lane will continue east across west-traveling traffic through a stoplight, while the two left-hand lanes will turn freely onto the on-ramp for I-35 North. 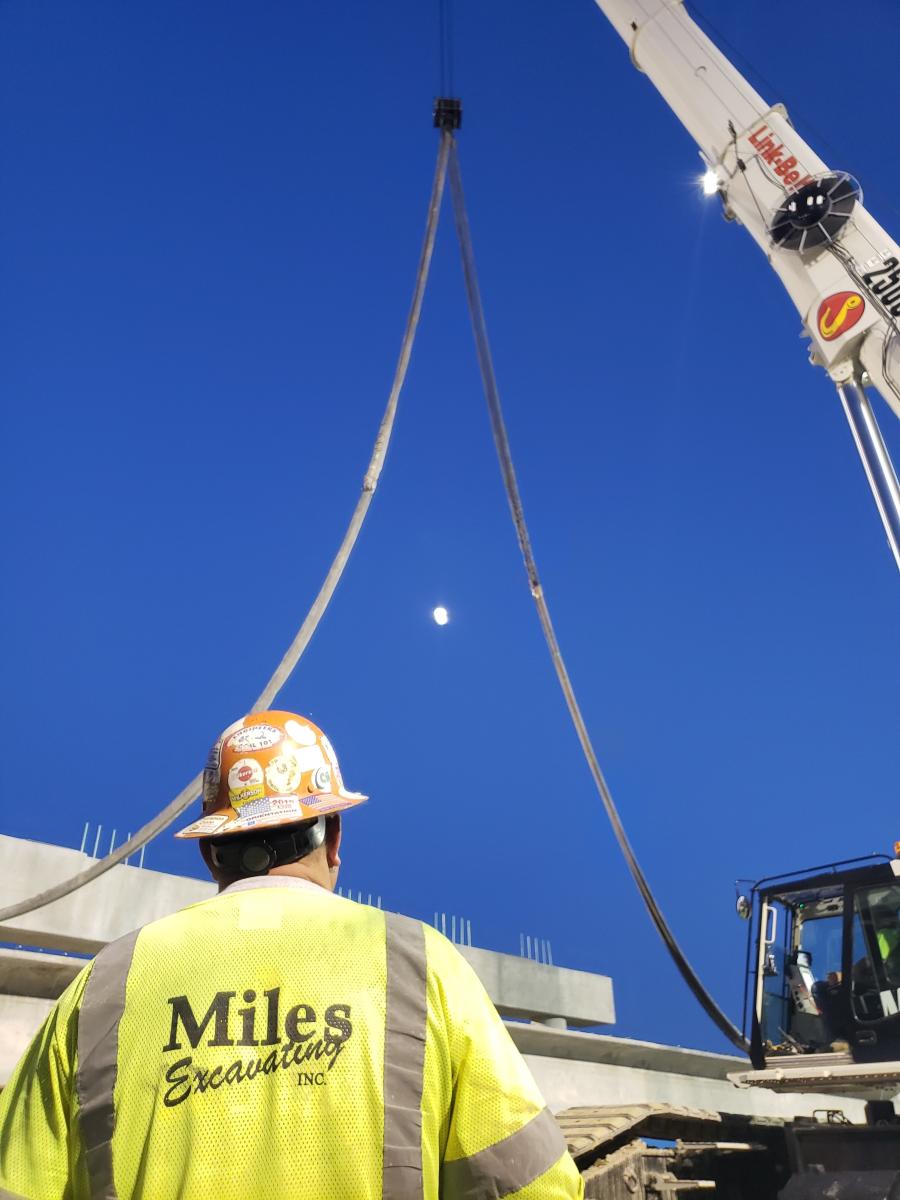 This type of interchange also is known as a half-diverging-diamond, a slight design variation on the more familiar diverging-diamond first invented by French engineers in 2009, where two directions of traffic on a roadway cross to the opposite side of both sides of a bridge on a freeway. At the Rt. 152/I-35 intersection, rather than two sides of lanes, the only diverging-diamond set of lanes is on the north side of the bridge structures, not on the south.

"We refer to it as either a displaced left or contra-flow interchange," Daulton said. "The idea behind building it at this intersection is because we have a lot of people who travel south on I-35 from Kearney and other towns to the north to get to Liberty to shop and go to restaurants. Consequently, when they want to drive back north, having that displaced left interchange allows them to free-flow back onto the interstate just as they would with a diverging diamond traffic pattern. That's also true of the heavier traffic movements and allows for optimal traffic flow."

Daulton said the I-35 southbound on-and-off ramps, plus the deceleration and acceleration lanes, were extended, but only the southbound off-ramp that ties into the diverging-diamond small bridge was widened to add an extra turn lane. Widening was also done with the I-35 northbound on-ramp to accommodate lanes coming from the east and west (through the diverging-diamond) on Rt. 152.

"And then, the heaviest movement is the northbound I-35 off-ramp, which prior to this project was a three-lane ramp," he continued, "where you exited the interstate on one lane before it opened up to three. Now, it will be five lanes with a triple left-turn set of lanes and a double right-turn set." 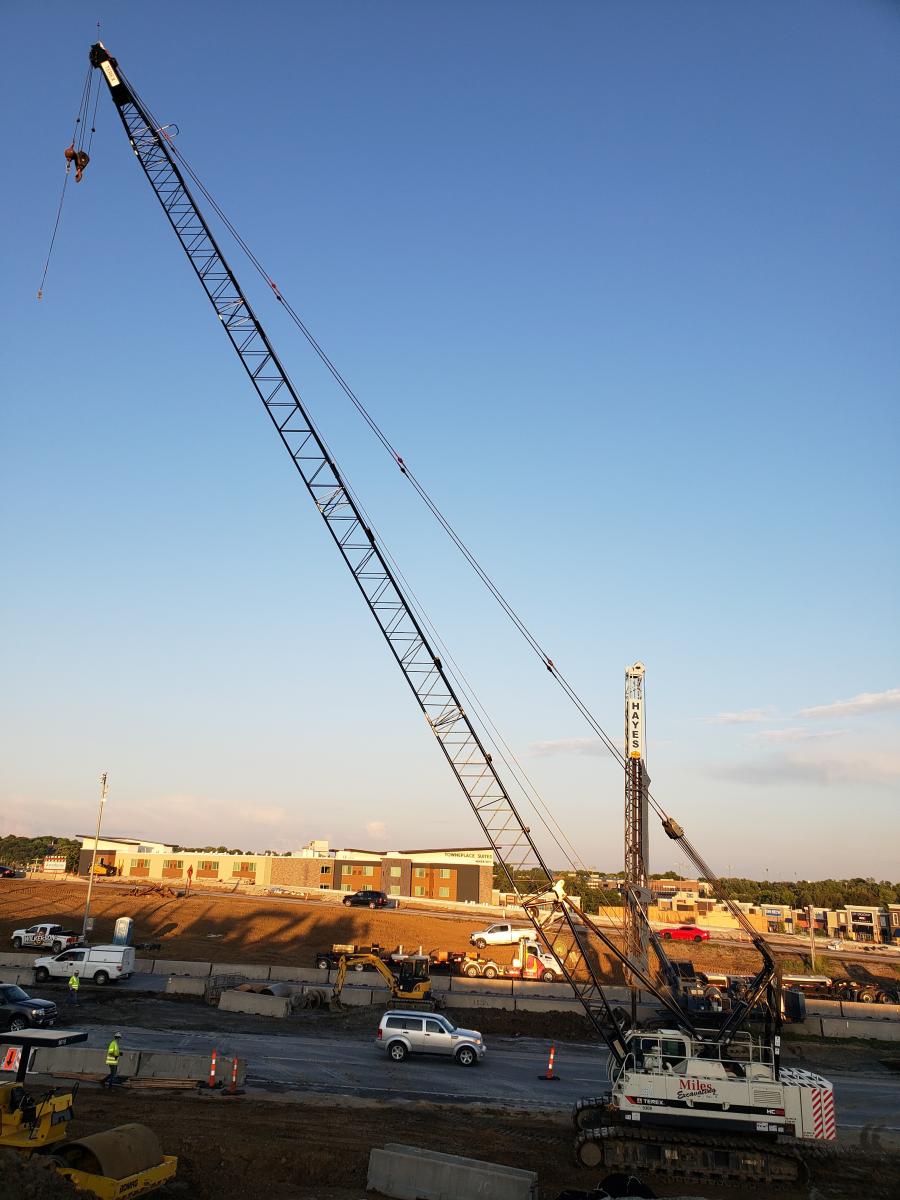 While Miles Excavating is overseeing the Rt. 152 bridge work itself, subcontractors on the two spans include Hayes Drilling, from Olathe, Kan., to do the substructure and drill shafts in the bents and Realm Construction, which is performing the steel tying for the columns, caps and bridge decks. That company is based in nearby Blue Springs, Mo.

In mid-July, Daulton reported that crews were pouring and setting concrete for the small bridge deck, as well as for the bents. Miles also had begun the process of setting the girders onto the big bridge supports. To get the right equipment for that project, Miles Excavating turned to Wilkerson Crane Rental in Lenexa, just outside Kansas City, Kan.

"The contractor brought in a smaller crane on site to pick and set steel," Daulton said. "At this point, other than moving the deck steel around and get the deck paving in place, they will have just one smaller crane on site. But, for the girder settings, they have been renting the larger cranes from Wilkerson."

Most of the girder setting has happened at night, along with concrete pours, at a time when MoDOT allows the prime contractor to do lane closures over the interstate.

Beyond the interchange, primarily on the east side of I-35, are other important pieces of the corridor improvement plan that MoDOT initially announced would likely be complete by August 2020.

For instance, on Kansas Street, work is underway to install additional turn lanes, widenings, retaining walls, sidewalks and pedestrian paths throughout the stretch of road between I-35 and Missouri Rt. 291. In addition, Daulton said, crews are making improvements to Blue Jay Drive (named after the nearby Liberty High School Blue Jays), just off Kansas Street.

"That intersection was included in the incentivized area for the contractor and hopefully it can open soon and not impact traffic too much after schools begin in August," he added.

Quick Stepping Toward the End 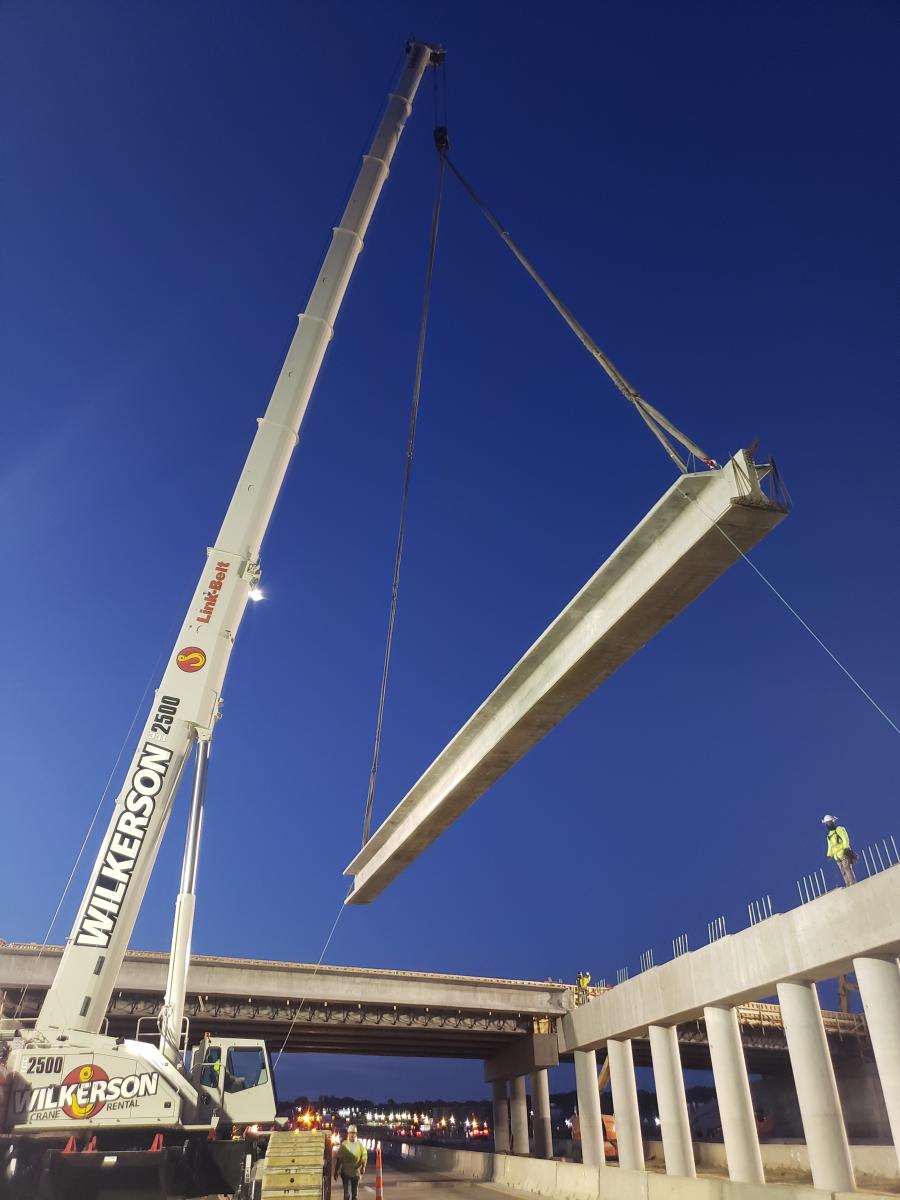 In the final weeks of the central part of the project, the interchange itself, work is progressing at a pace that is both feverish and measured.

"Right now, we have bridge work going on, barrier walls are being formed and crews are working on getting the permanent signals ready," Daulton said. "We have a little bit of about everything on our checklist happening right now. They have had three paving crews out there, a bridge crew, a storm and sewer crew — not to mention all the various subs working on the utilities. At our busiest, I would guess we have around 100 people working on this project."

Despite his agency's stated finish date for the surrounding road work as being a year from now, Daulton thinks that Miles Excavating has alternative plans in mind.

"I believe the goal for the contractor is to complete this project and finish the entire corridor by the end of this calendar year. I don't know if they will meet that, but I know it's the goal they have set. They know it will be mutually beneficial to the traveling public, to MoDOT and to them to do so." CEG