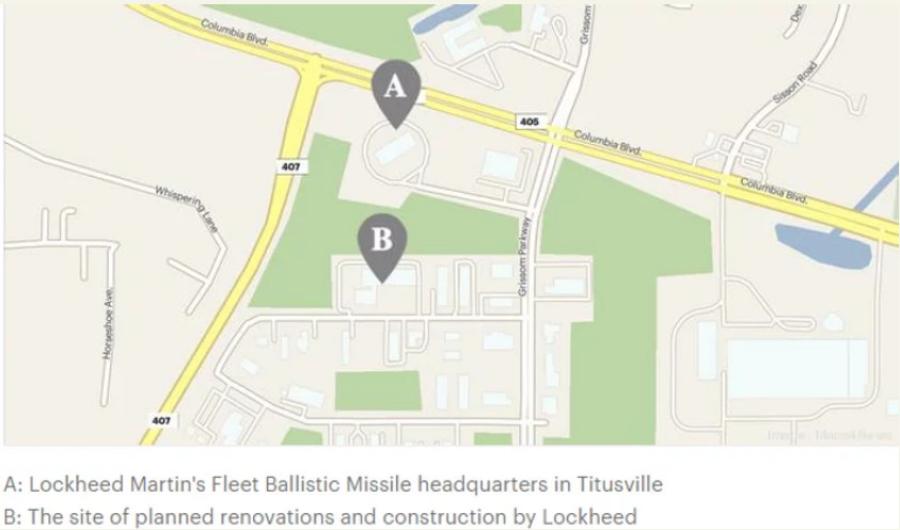 The defense and aeronautics company's real estate arm, LMC Properties Inc., on Nov. 6 filed plans with the state for renovations and construction near its Titusville, Fla., campus. Lockheed's plans call for the construction of a factory and the renovation of an office building and warehouse already on the property.

The 9.3-acre site is behind the Fleet Ballistic Missile headquarters of Lockheed, which the defense giant opened in Titusville last summer after relocating from Sunnyvale, Calif.

The move was a $40 million investment that created 350 local jobs, according to the Economic Development Commission of Florida's Space Coast.

Lockheed is poised to renovate a 38,000-sq.-ft. office building and a 14,000-sq.-ft. warehouse. Plus, Lockheed would build a 43,000-sq.-ft. factory, though it's unclear what specific manufacturing work may take place there. It's also unknown how many jobs this expansion would create, but Lockheed's plans call for the creation of 173 parking spaces.

Lockheed Martin executives could not be reached for comment.

Melbourne, Fla.-based Construction Engineering Group is the civil engineer, and Southeastern Surveying and Mapping Corp. in Orlando, Fla., is the surveyor.

Lockheed's Fleet Ballistic Missile program is part of its space division, which grew roughly 6 percent year over year to $2.85 billion in sales in the third quarter of 2020.

"Right now, we see it as our highest growth business area, mid-single-digit range," said Ken Possenriede, Lockheed's chief financial officer during an Oct. 20 earnings call with investors. "Think of that [happening] as our strategic missile defense portfolio is expected to be up double digits."

Lockheed is one of the region's biggest employers with roughly 9,000 combined workers in Orlando and on the Space Coast. It is growing its presence, turning a Titusville museum into a manufacturing facility for the company's Orion production program. Plus, Lockheed has more than 400 open local positions listed on its website.

The Naval Ordinance Test Unit, a government testing facility for sea-based weapons, was going to be moved out of Cape Canaveral by the U.S. Department of Defense in 2005. The Economic Development Commission (EDC) of Florida's Space Coast helped reverse that decision, which ended up enabling the region to lure Lockheed's fleet ballistic headquarters to Brevard County, Lynda Weatherman, chief executive officer of the EDC, told the Orlando Business Journal.

"It led to the relocation of the Fleet Ballistic Missile headquarters from California, and now another expansion of their footprint on the Space Coast," Weatherman said.