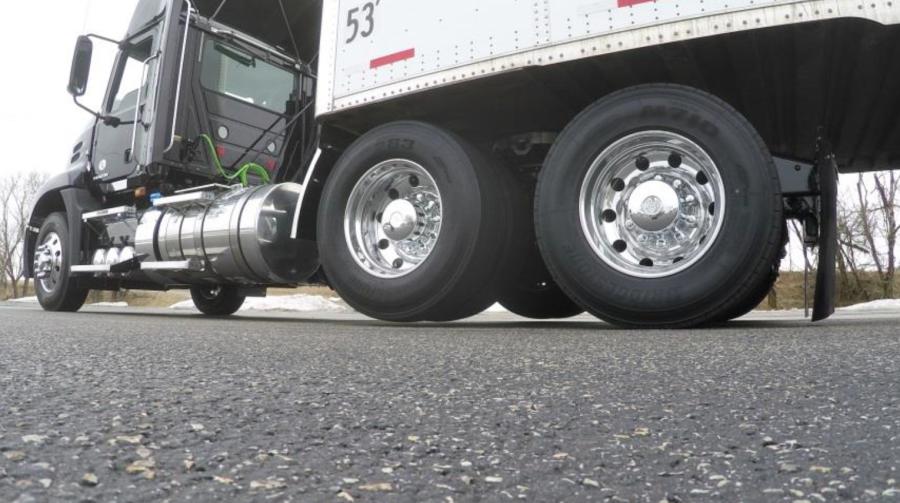 The 6x2 with liftable pusher axle offers improved fuel efficiency and productivity benefits and is designed for applications that haul out heavy and return empty, such as bulk haul. The addition of Automatic Standby Mode eliminates the need for the driver to manually push buttons to initiate standby mode, simplifying operation.

“The Mack Pinnacle 6x2 with liftable pusher axle model really helps those customers in bulk haul applications save on fuel because sensors lift or lower the axle to decrease or increase traction, providing better performance and ride,” said Roy Horton, Mack director of product strategy. “The addition of Automatic Standby Mode further simplifies things for the driver by eliminating any need for manual input in putting the truck in standby mode to prevent overload.”

When the ignition is off, Automatic Standby equalizes the suspension pressure, preventing the rear axle from being overloaded. The driver does not have to remember to initiate the standby mode and also does not need to remember the button sequence to put it in standby.

The 6x2 with liftable pusher axle monitors trailer weight and adjusts the truck's driveline configuration to boost fuel efficiency without impacting performance. The 6x2 with liftable pusher axle is capable of determining payload by using sensors in the rear suspension and either lifting or lowering the foremost rear axle. When an empty load is detected, the axle lifts, allowing the tractor to operate as a 4x2 for less drag, better fuel efficiency and reduced tire wear, which helps lower maintenance costs. For full loads, the same axle is lowered to provide additional stability and distribution of the trailer's weight.

To deliver optimal traction, the system's suspension pressure and ride height are continuously monitored and adjusted to maintain a load bias toward the drive axle. In addition, three driver-selectable traction control modes are available via a dash-mounted switch:

During normal operation, control of the lift axle is automatic based on payload. The system offers a manual control feature that enables a driver to raise or lower the suspension for easier landing gear retraction or trailer hook-up respectively.

The Pinnacle model can be spec'd with the Mack MP7, a lightweight yet powerful 11-liter engine that weighs about 400 pounds less than a typical 13-liter engine.