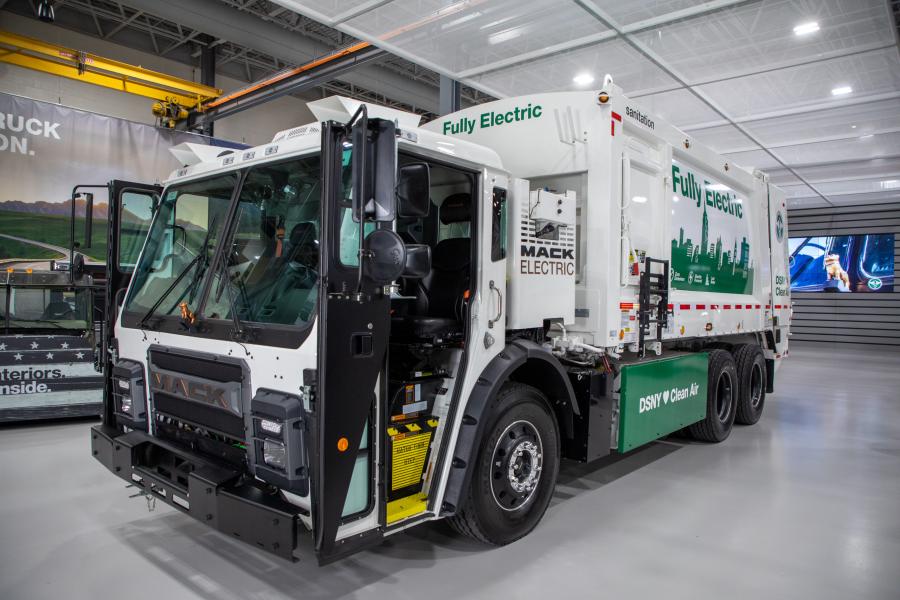 Mack Trucks demonstrated the Mack LR Electric, a fully electric version of the Mack LR refuse model, to officials from the New York City Department of Sanitation (DSNY) at the Allentown, Pa.-based Mack Customer Center. Unveiled in May 2019, the Mack LR Electric will begin real-world testing in Q2 2020 in DSNY's demanding operations.

"The Mack LR Electric demonstrates Mack's leadership in powertrain innovation, bringing clean, quiet propulsion to the refuse application, which is one of the toughest in heavy-duty trucking due to the harsh operating environments and number of starts and stops during a shift," said Jonathan Randall, Mack Trucks senior vice president, North American sales and marketing. "As we begin Mack's 120th anniversary this year, we look forward to testing our latest powertrain innovation with DSNY as they put the LR Electric through a rigorous test."

During the demonstration, the Mack LR Electric was piloted around a test course set up on Mack's test track and skid-pad, which simulated the real world stop-and-go driving found in refuse applications. The test course also featured tight turns and an area to reverse the vehicle, highlighting the truck's maneuverability.

"Next to our workforce, our collection trucks are integral to allowing us to get our job done," said DSNY Commissioner Kathryn Garcia. "As a department, we are committed to finding ways to become even cleaner and greener, and we are excited to be able to test this all electric ‘first' — for both Mack Trucks and for the City of New York."

DSNY will base the Mack LR Electric demonstration model at its Brooklyn North 1 garage and test it on a local collection route. Several vehicle performance metrics will be evaluated by DSNY, including operating range, payload capacity, regenerative braking performance and the overall functionality of a fully electric refuse vehicle in their operation.

"New York City has a goal to reduce our greenhouse gas emissions 80 percent by the year 2035. DSNY along with our more than 6,000 vehicles will play a major role as we push toward that goal," said DSNY Deputy Commissioner Rocky DiRico. "We're looking at all kinds of technologies to help us achieve that reduction. We're especially proud to be the first Mack customer to test the LR Electric model."

DSNY is the world's largest sanitation department, collecting more than 12,000 tons of refuse and recyclables each day. With Mack trucks forming the backbone of their heavy-duty collection fleet, as well as the strong emphasis DSNY places on reducing their carbon footprint, the partnership between Mack Trucks and DSNY to develop and test the first LR Electric model was ideal.