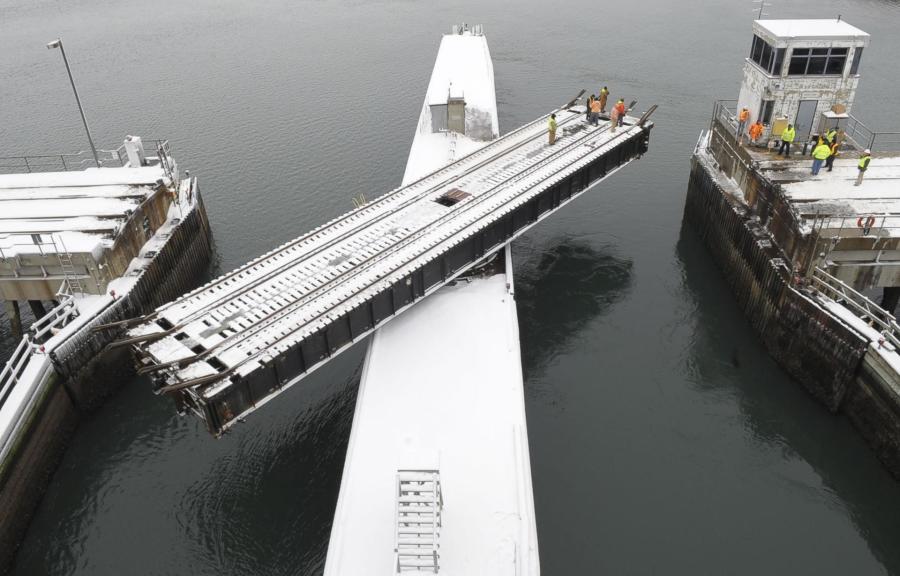 The Beverly Drawbridge carries the Rockport and Newburyport Commuter Rail Line over the Danvers River in Beverly, Mass., which is located in Essex County. In the past four years, there have reportedly been numerous service delays caused by malfunctions of the swing span, which was built in 1885 and is now more than 130 years old.

The contract calls for the replacement of Beverly Drawbridge swing span superstructure with a new mechanical and electrical system.

"The Swing Span Superstructure will be fabricated in Alabama and will be floated out on a barge to Beverly for replacement," Battiston said.

Battiston noted that a Gantry System will be used to remove and replace the swing span superstructure.

"The existing swing span structure was jacked to determine the dead load weight," she said.

HNTB Corporation was selected as the engineering firm responsible for the design of the overall project.

The full project scope has been split into two contracts, with the first contract to include approach span rehabilitation and the second to include the swing span superstructure/mechanical component replacement.

The contractor for Contract 1 is Middlesex Corp., and notice to proceed was given on Aug, 5, 2015. Final completion is set for Feb., 28, 2018. Work is continuing with concrete pile repair work within the navigational channel and north and south abutment repairs.

Contract 2 was awarded to JF White Contracting. This contract continues with various work activities on the bridge in preparation of removal of the existing swing span and the float-in of new swing span and testing. This work will require a 28-day shutdown of rail service along the Newburyport/Rockport Commuter Rail Lines proposed for July 10, 2017 through Aug. 6, 2017, with regular train service on Aug. 7, 2017.

The new swing span will be supported by the existing pivot pier, and other improvements in the area will include a new electrical room and generator and a remodeled control house.

According to J.F. White's website, work will consist of the complete replacement of the existing steel swing span with a new steel swing span for the two mainline railroad tracks, along with modifications to the existing center pivot pier to accommodate the new swing span superstructure. In addition, the contractor will replace the bridge's mechanical, electrical, bridge control and railroad signal components/systems.

Also required, will be a partial demolition of the existing pivot pier deck and existing access stairway, along with construction of a new steel support platform on the pivot pier to support the new electric room.