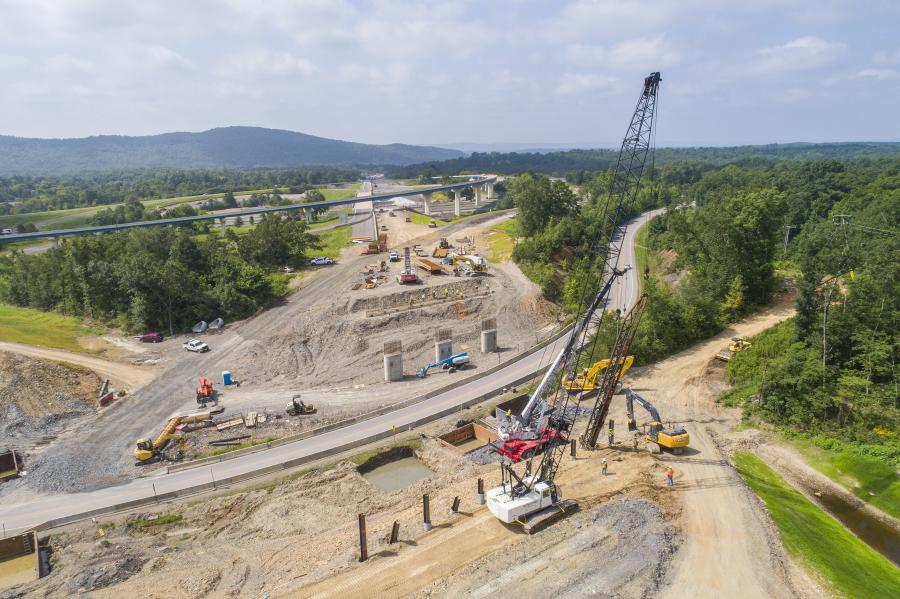 The job called for 2,233,411 cu. yds. of unclassified excavation and 2,691,692 cu. yds. of compacted embankment. Cranes, backhoes, dozers and dump trucks have been required to perform the work. Concrete, steel, reinforcing steel, aggregate base and asphalt are among the chief materials being used. (Arkansas DOT photo)

In Garland County, Ark., construction crews are working diligently to complete a $78.5 million, 5.8-mi. extension of the King Expressway/Hot Springs Bypass from the U.S. Highway 70 East interchange to the junction of Arkansas Highway 5 and AR 7. The Arkansas Department of Transportation (ArDOT) expects all work to be finished by fall 2022.

"Citizens of Fountain Lake, Hot Springs Village, Jessieville and surrounding areas will be able to travel into Hot Springs faster and safer for such things as shopping and medical care," said Tony Evans, ArDOT District 6 construction engineer. "Controlled access of four-lane roadways is our normal criteria where there will be exit interchanges and no driveways for the length of the route. The National Park Service requested that there was controlled access, as well." 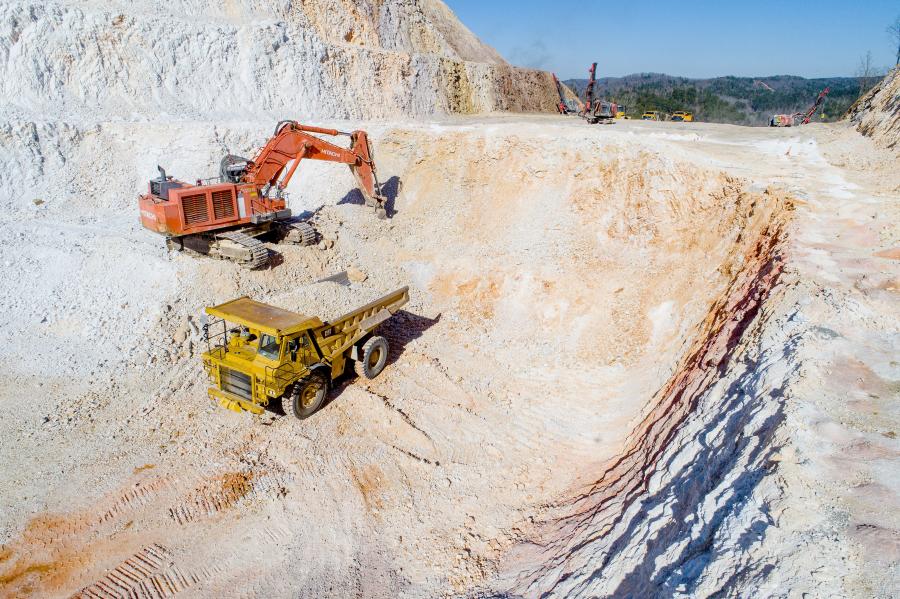 Work began in March 2020. The bypass extension, which serves as a two-lane route that will have controlled access with entrance and exit ramps, includes multiple bridges, which have already been completed.

Evans said one of the biggest challenges for workers has been the excavation through high points in the project.

"The geology of the area is very diverse with extremely hard rock, which had to be negotiated. Explosives were used on some points to break free the rock to construct the roadway."

McGeorge Contracting Co. serves as the general contractor of the project.

"McGeorge is known for expedient construction of large projects, most notably Highway 70 from Interstate 30 to the Hot Springs Bypass. The contractor completed that project three months ahead of schedule," said Evans.

Fortunately, dealing with area motorists has not been a big concern for crews.

"This project is new location work, unlike urban rehabilitation projects," said Evans. "There was no traffic to manage on a new highway. There were minor inconveniences to the local roadways that cross the new bypass."

Evans noted the most time-consuming part of this project has involved the earthwork, base and surfacing and building of the now completed bridges.

The job called for 2,233,411 cu. yds. of unclassified excavation and 2,691,692 cu. yds. of compacted embankment. Cranes, backhoes, dozers and dump trucks have been required to perform the work. Concrete, steel, reinforcing steel, aggregate base and asphalt are among the chief materials being used.

Fortunately, the elements have not forced any significant delays.

"Weather always impacts construction," said Evans. "Contractors account for potential weather impacts when they build their initial schedule to determine the number of days they bid."

From a design perspective, it's gratifying for crews to play a part in a project of this magnitude. As crews race toward the finish line, it's important to note that the project has taken more than 20 years for this project to go from conception to reality.

More than two decades ago, ArDOT hired a consultant to assist in choosing an initial alignment for the bypass from U.S. Highway 70, north to Highway 7. They used a high-powered computer program that, after inputting all the necessary variables, would help select the best cost route between two locations. Among the many variables was terrain, bridge and tunnel costs, excavation cost, cost of fill and environmentally sensitive areas. 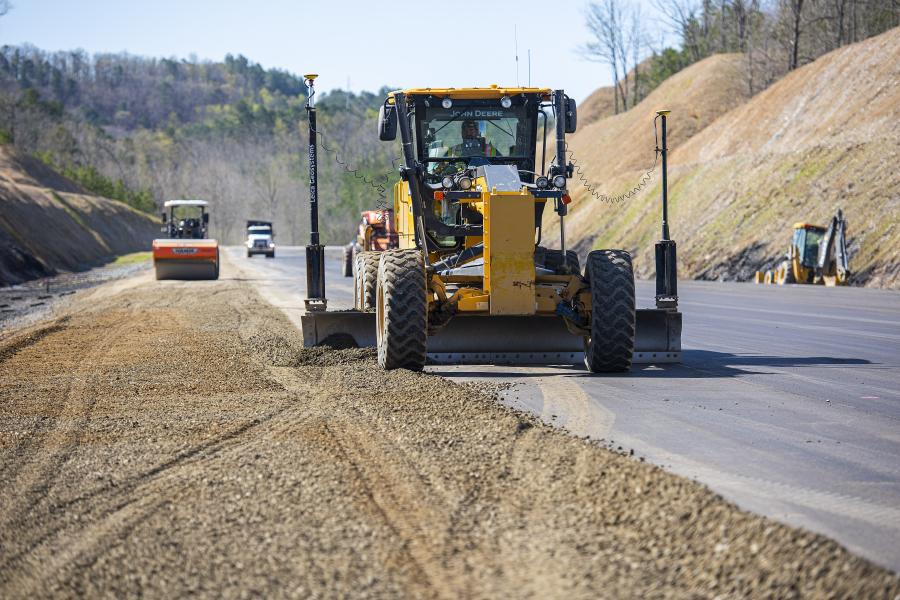 Regarding unexpected issues that caused a delay for workers, "There is an issue with the slopes adjacent to a bridge," said Rick Ellis, division head of ArDOT's bridge division. "The plans of the retaining wall at Mill Creek Road were in error. Among other things, the retaining wall plans consisted of specific details for wall location, orientation, length and wall elevations. Some of the top of wall elevations were calculated and detailed incorrectly. This error was not discovered until the retaining wall had already been constructed.

"This would have made it very difficult, if not impossible, for the slope of fill behind the wall to be maintained in the future," said Ellis. "The type and design of the wall did not simply allow more wall to be added to the top. A new wall had to be constructed in front of and attached to the already constructed wall. This was a unique issue that required a lot of collaboration between ARDOT, the contractor and the wall designer/fabricator."

Ellis remarked that it's extremely rewarding to see the work so close to completion.

"This new roadway has some fantastic views that showcase the geology of Arkansas and fits in well as a scenic highway. This is a project that all citizens of Arkansas can be proud of. The benefit will not only be to the locals but also visitors, particularly those who travel to Lake Ouachita State Park and other locations."

According to Jared Wiley, ArDOT's assistant chief engineer of planning, much of the credit for the almost completed undertaking goes to the community that made the work possible.

"This is a partnering project. The citizens approved a tax to help make this project a reality and are providing $30 million towards construction." CEG