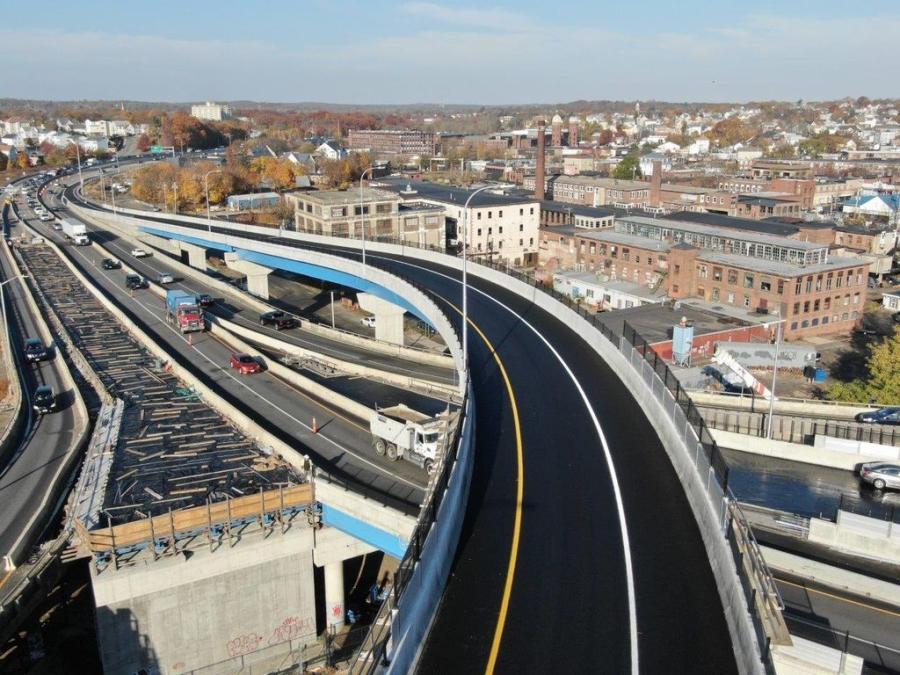 This "missing move" highway ramp was never included when the original Route 6/10 interchange was built in the 1950s, requiring people for approximately 70 years to use local streets through Olneyville Square to make this connection. The flyover is one of the signature pieces of RIDOT's ongoing $410 million Route 6/10 Interchange project.

The opening ceremony took place on the ramp and included a procession of vehicles driving over the bridge for the first time.

"This new highway connection serves not just the Olneyville community but anyone who travels Rhode Island roads," Gov. Dan McKee said. "All Rhode Islanders can benefit from reduced traffic, safer roads and an easier commute.

"I want to thank RIDOT, our Congressional delegation and all those involved for investing in our roads and bridges and for bringing this project to completion ahead of schedule. We're making great progress in building a 21st century infrastructure in Rhode Island, and with funding from the Infrastructure Investment and Jobs Act, we are well-positioned to make long-term, impactful investment in our roads and bridges, in jobs and in our economy."

"As the former city councilor for the Olneyville neighborhood and a resident, I am so happy to see this project completed," Matos said. "For nearly 70 years, Olneyville Square was used as a cut through to get to other parts of the state. With this new extension, we are reducing the number of cars in the square which will only help the quality of life for the residents and business owners. This flyover is a perfect example of why infrastructure matters. It is not just about building bridges, but it's about changing and improving communities."

"This highway ramp literally was decades in the making, as was the entire Route 6/10 project itself," Alviti said. "While the 6/10 project has two more years of construction, we were able to schedule our work to be able to deliver this ramp for the public well ahead of schedule."

"Fixing the 6-10 Interchange has been on the state's ‘to do' list for decades. Thanks to significant federal investments, the state is making real progress. Hats off to RIDOT and the men and women of the construction industry for finishing this new flyover ramp ahead of schedule and giving drivers a safer, faster, and less bumpy commute while spurring new opportunities for economic development in the area," said Reed, a senior member of the Appropriations Subcommittee on Transportation, Housing and Urban Development (THUD).

"With President Biden signing the Infrastructure Investment and Jobs Act into law, RIDOT can count on $1.7 billion to speed up projects to improve the lives and safety of all Rhode Islanders."

"The new flyover ramp is an elegant addition to the 6/10 Interchange that will make the capital city easier to navigate and ease gridlock in Olneyville Square," said Whitehouse, a senior member of the Senate Environment and Public Works Committee. "I'm pleased to report that the infrastructure bill we passed into law will provide significantly more money to RIDOT for job-creating highway and bridge projects like the overhaul of the 6/10."

"For decades, Rhode Islanders have been waiting for this 6/10 interchange project, and now we've delivered. This long overdue improvement will boost public safety, reduce congestion and improve commute times for the tens of thousands of Rhode Islanders who will use this new connector every day," said Langevin. "Job well done to Director Alviti and his team for successfully completing this project — one of the largest in RIDOT's history — and doing so two years ahead of schedule. This is a big deal for our state."

"Today's opening of the new flyover ramp is a critical component of the ongoing 6/10 Interchange Project. This strategic investment will alleviate traffic and greatly benefit pedestrians and businesses in the Olneyville neighborhood and surrounding area," Cicilline said. "And thanks to the historic bipartisan infrastructure bill signed into law, our state will have even more resources to make forward-thinking infrastructure investments in the years to come."

The sweeping ramp is more than 940 ft. long, passing more than 50 ft. above Route 10. It is 26 ft. wide and its single travel lane is flanked by wide shoulders on both sides to accommodate any disabled vehicles while keeping the ramp open to travelers. RIDOT expects it will carry approximately 15,370 vehicles per day.

Plans for the entire 6/10 Interchange project sat on the drawing board for nearly 30 years prior to RIDOT finally moving it forward as part of the RhodeWorks program. During the years of indecision and inaction on this vital highway link, its network of bridges deteriorated to the point where seven of nine bridges were classified as structurally deficient. Temporary supports were installed and millions of dollars spent in a series of repair projects necessary to keep the interchange safe and open.

RIDOT is using a design-build approach that will save money and complete the project more quickly than anticipated. Because the designer and the contractor are part of one team, the risk of cost overruns is reduced. In addition, this approach historically leads to fewer change orders and design errors that would affect the cost of the job.

The 6/10 Interchange project is scheduled for final completion in fall 2023.