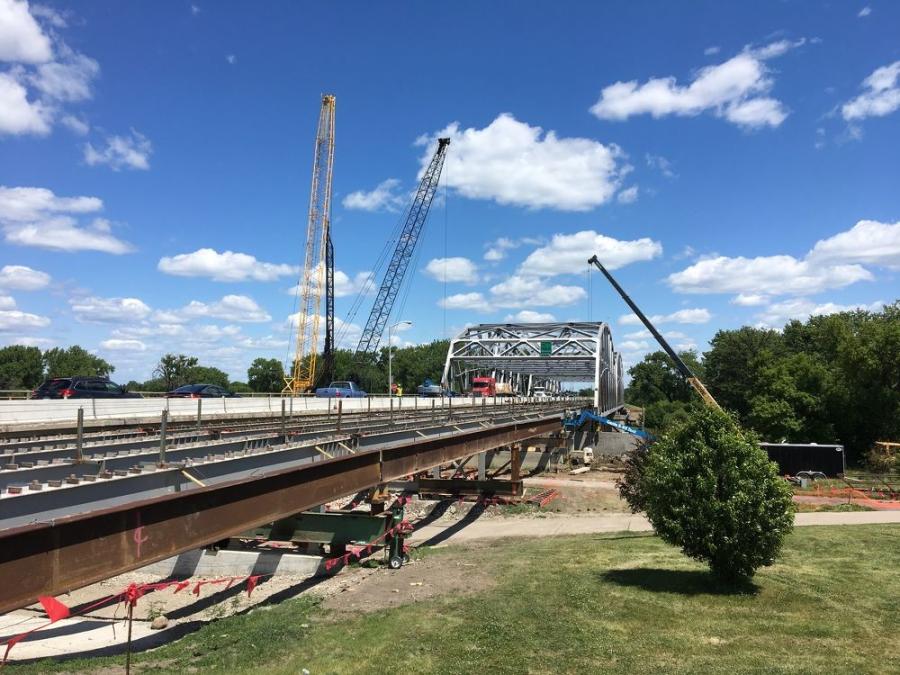 The work started on March 15, 2017 and should see substantial completion (the use of all four lanes) by late fall of this year, with some minor work to be done in the spring of 2019.

The project, split between the two DOTs, is being funded primarily by federal funding and state contributions. The work started on March 15, 2017 and should see substantial completion (the use of all four lanes) by late fall of this year, with some minor work to be done in the spring of 2019. The bridge is in East Grand Forks on the Minnesota side and Grand Forks on the North Dakota side.

The work entails a complete deck replacement, pier replacement, structural repairs and new lighting, with the new layout maintaining four lanes of traffic and adding an additional protected 8.9 ft. shared-used walkway that will connect the Greenway Trail on each side of the Red River. There were no pedestrian facilities on the bridge prior to the project.

Although the bridge deck will have a brand new look, motorists won't see much difference in lane space as the biggest change is to the bike and pedestrian trail, according to the project web page. A center median is not a design standard on bridges of this size, and by removing it the space can be better used to provide a safe walkway. Although the driving lanes are decreased by 6 in., the shoulders see an increase of 15 in.. When complete, the bridge will be able to accommodate the same vehicles that use it now.

“The project will result in a safer and longer lasting bridge, a smoother and longer lasting bridge deck and a safer walkway for pedestrians and bicyclists,” said TJ Melcher, public affairs coordinator, District 2, MnDOT. “A safe pedestrian crossing was important in connecting the Greenway Trail. The project was able to ensure the bridge will accommodate all of the same traffic as before, while also increasing safety for trail users.”

The 1,261-ft. long bridge was built in 1963, and is eligible to be on the National Register of Historic Places.

“There was a lot of consideration of the historic nature of the bridge in many of the design aspects,” said Paul Konickson, P.E., MnDOT District 2 bridge engineer and the project engineer.

The bridge has 13 total spans with the two spans crossing the river (Parker trusses), with each truss span being 279 ft. The upgrade was much needed.

Because of the age, relatively good condition, and historic nature of the existing structure, and along with the complexities of carrying traffic and costs of building a new bridge, it was determined that the proposed rehabilitation was the best option. It is a lower cost alternative, yet offers the benefit of increasing safety for all users: motorists, bicyclists and pedestrians., according to the website.

A shared-use path/bike trai is being added as another bike and pedestrian connection between East Grand Forks and Grand Forks.

“The Kennedy Bridge carries a lot of traffic,” said Konickson, “and as we were doing the concrete pours, we had to do a three-day detour that really impacted the community.”

MnDOT will try to coordinate passage for agricultural equipment when possible, according to the website. “Those crossings can only take place from 4 to 6 a.m., and must be requested at least 24 hours in advance.

“They built a temporary concrete pier on the west side of the river last spring — moving, sliding and tipping it toward the river,” said Konickson. “It supported the bridge and trusses as they removed the existing pier and built a new one 15 feet away. They jacked up the bridge, placed the pier, and jacked the bridge down. The deck was poured in three pours, and there were some small closure pours at the end of the deck.”

While the dollar value of the project may be small — $15.66 million — the work is complicated and sophisticated and includes features found in much larger initiatives.

“There's a lot of staging,” said Konickson. “They had to do a lot of that for the pier and the removal of half of the deck so that they could carry traffic. As they were doing the pier construction, they started removing the south half of the deck.”

David Burt, Zenith Tech's project manager, is satisfied with the progress of the job.

“Everything is on schedule as of right now,” he said. “The biggest hurdle in 2017 was replacing one of piers underneath the bridge, and that went really smoothly —we finished it in August. The major hurdle in 2018 will be the painting work and that will be starting at the end of June/start of July.”

Weekly progress meetings are held with MnDOT and the cities to coordinate the work, resolve issues and help with traffic updates. This is bolstered with daily discussions at the job site.

The key subcontractors on the project are: Danny's Construction, Thomas Industrial, E&J Rebar, Moorhead Electric, Braun Intertec, Spruce Valley and Strata Corporation. An average day, depending on the type of work being done, could see 25 to 40 Zenith Tech and subcontractor personnel onsite.

The work is being done in 10-hour day shifts, Monday to Saturday. The first construction season ended in December and will resume in March.

“We haven't had too much excess wear and tear on our equipment outside of what we normally expect,” said Burt. “We've had quite a bit of equipment up here that is moving in and out — we generally bring up equipment for certain operations and get it out to other projects.”

There are no onsite mechanics as equipment rental companies are supplying the maintenance services.

The company, based in Wisconsin, generally rents equipment on remote projects when scheduling and trucking becomes inefficient and costly.

“We tend to rent from the same vendors that we utilize for our Wisconsin operations,” said Burt, “and this relationship with these vendors has served us well on this project so far.”

For the Kennedy Bridge project, the success has been based on solid planning.

“In-house we had a lot of design review meetings with our design team to get out the best designs to our guys out in the field,” said Burt, “this way our crews can focus on constructing the project instead of worrying about the design and staging on the project.”