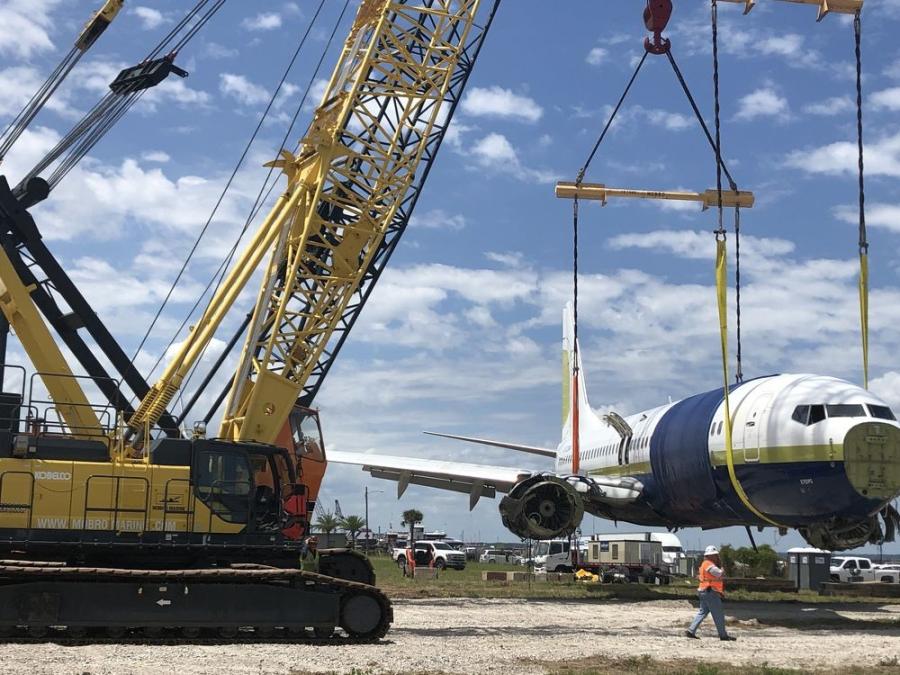 Upon arrival to Mobro’s Green Cove Springs location, crews walked the two cranes off of their barges and brought the plane barge to the bulkhead.

When an airplane skidded off the runway and into the St. Johns River on Jacksonville Naval Air Station (NAS) in Jacksonville, Fla., on May 3, Mobro Marine Inc. knew just what to do.

"We became involved in the plane salvage and move when we heard about the accident on the news," explained Stephen Cumella, who has been the chief financial officer for Mobro Marine since 2004.

Mobro had performed work for Jacksonville NAS previously, so company president John Rowland contacted officials at the base to offer assistance. 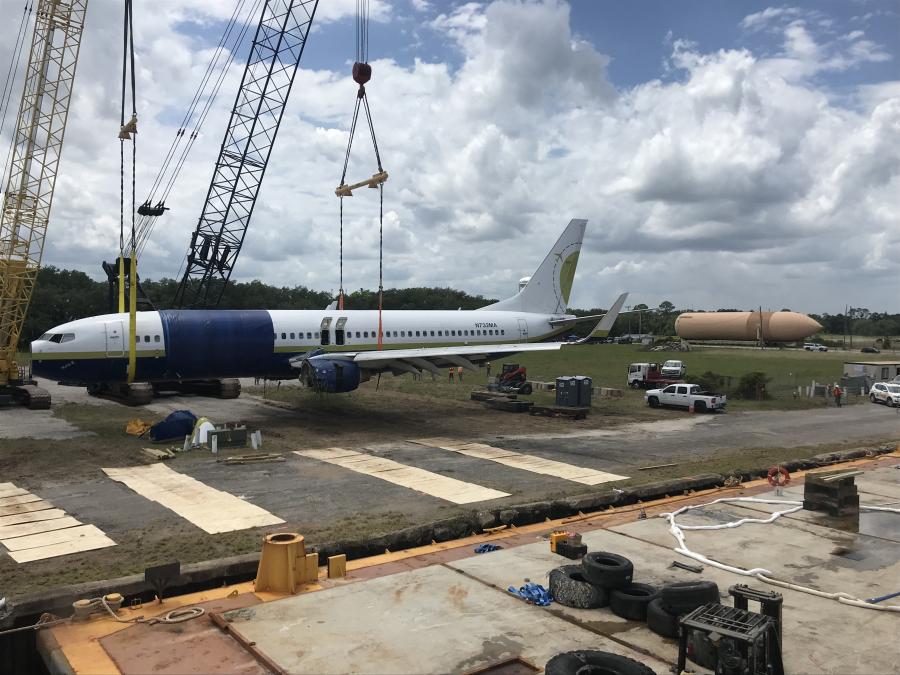 "Since it was a privately-owned aircraft, we were referred to the airline and its insurer as well as the company they had hired to assist them, Moran Environmental Recovery," Cumella said. "We, along with other companies, described how we might salvage the plane, estimated timing of the work, equipment to be used and gave our cost proposal. [We] were selected on this basis."

According to the Associated Press, the incident occurred when the pilot of a military-chartered jet struggled to control the plane while landing during a thunderstorm with heavy rain. The Boeing 737 came from Naval Station Guantanamo Bay, Cuba, with 136 passengers and seven crew members. It was reportedly a regular charter run by Miami Air International.

The plane landed hard, then bounced and swerved before skidding off the runway and coming to a stop in the river. During the landing, oxygen masks deployed and overhead bins opened and spilled. There were no critical injuries, however, and passengers lined up on the plane's wings while awaiting rescue. Officials said that 22 people were treated, but only a 3-month-old baby was hospitalized out of "an abundance of caution."

When National Transportation Safety Board investigators arrived the next day, the jet was still partially submerged in the shallow water with its nose apparently sliced off from the impact. They were able to obtain the plane's flight data recorder, which should provide some insight into what went wrong. 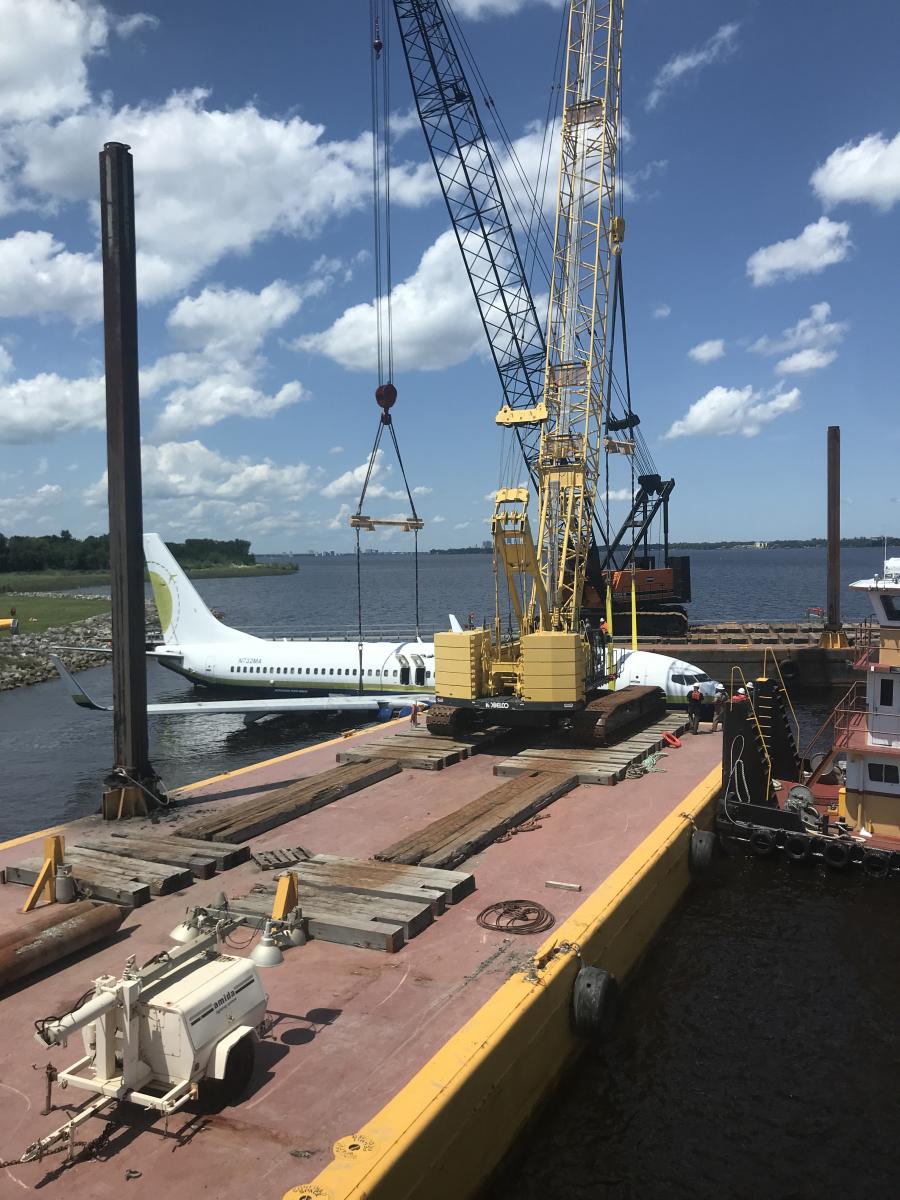 "We planned and performed the tandem lift out of the river using spreader bars and straps on each crane," Cumella said. "The Kobelco crane lifted the front with the straps around the fuselage while the American crane lifted from two picking points on the wings. They lifted the plane straight up and then the third barge was pushed under the plane and the plane was set down on cribbing and tied down to transport down the river the next day to Green Cove Springs."

Upon arrival at the Green Cove Springs location, crews walked the two cranes off of their barges and brought the plane barge to the bulkhead.

"There we performed a tandem pick again and the two cranes walked about 200 feet and placed the plane on cribbing where the NTSB inspection will take place," Cumella said.

He reported that there was a small amount of fuel spilled at the time of the accident, estimated at a few hundred gallons. Moran Environmental Recovery quickly placed fuel boom in the water to contain the fuel and cleaned up any residual fuel found. 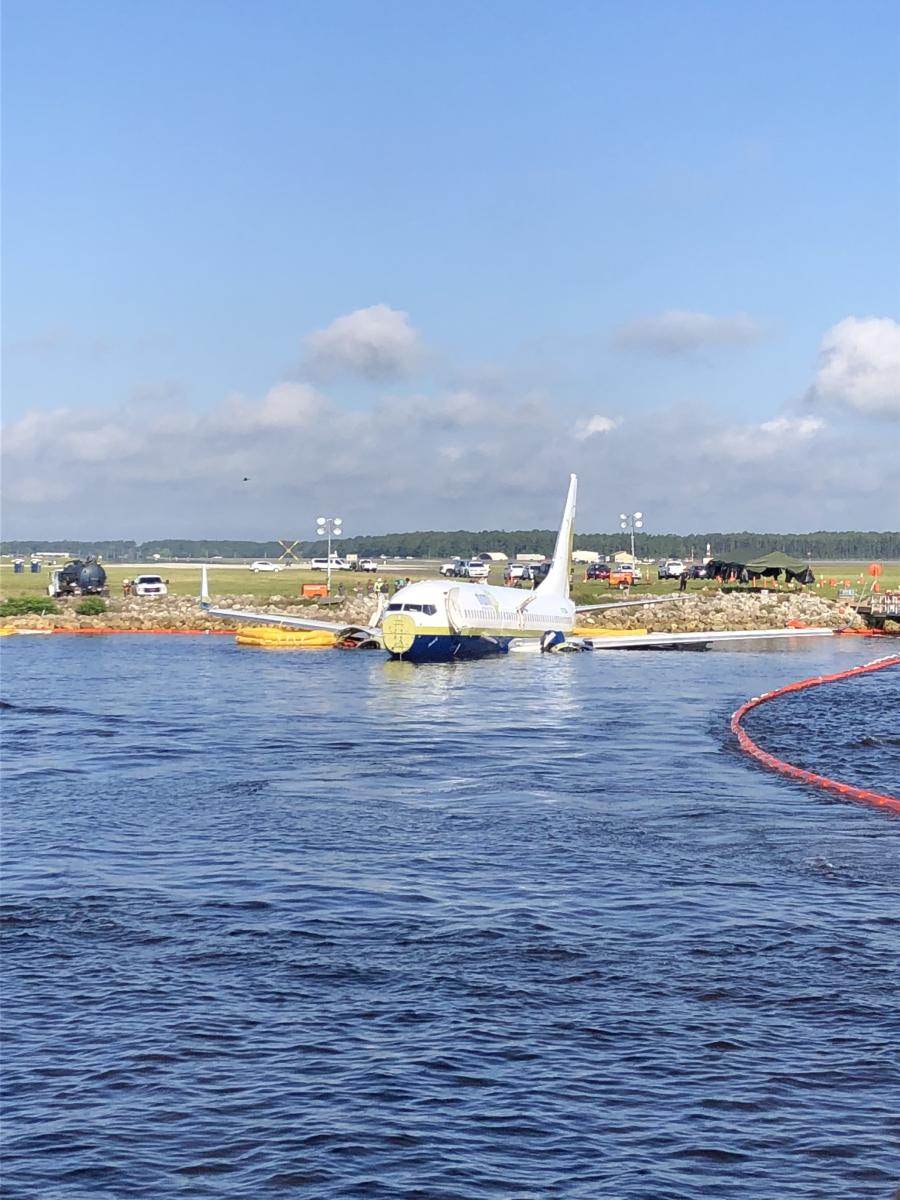 "The plane was in very shallow, rocky water and located near a pier," Cumella said. "Much care had to be taken to determine where to locate the crane barges so the barge for the plane had room to come in and out, while staying safely within the load ratings based on the pick radiuses the cranes would have to use. Obviously, we did not want to cause any more damage to the plane than it has already suffered and safety and making sure no additional spills were of utmost importance."

According to Cumella, Mobro in the past has salvaged smaller private aircraft, boats, yachts and shrimp boats from the river and ocean. They also have experience in moving craft onto barges such as fighter jets, radar planes and several types of helicopters for the military.

"Another notable job for us was moving the Space Shuttle solid rocket booster tank from Port Canaveral to Green Cove Springs for a museum after the shuttle program ended," he said.

Mobro Marine Inc. has been in business since 1962. Cumella explained that the company leases and sells barges, cranes and tugboats from its Green Cove Springs and Tampa, Fla., locations, which are primarily used by contractors in road construction, bridge building, dredging companies, port infrastructure (piers, bulkheading, port operations buildings and dredging) and commercial construction.

"We are the Kobelco crane dealer for Florida," he said. "We perform heavy lifts and salvage services. We provide our customers with ocean-going and inland towing of both our barges and their barges and can load at any port or at our two private ports in Green Cove Springs and Tampa."

The company also repairs and rebuilds cranes, drydock tugboats and barges at its Green Cove Springs shipyard. It builds new boats and barges for its rental fleet. The Jacksonville location sells American, Terex and Kobelco parts.