Modern school facility is built to replace one of the oldest Maryland schools in operation. 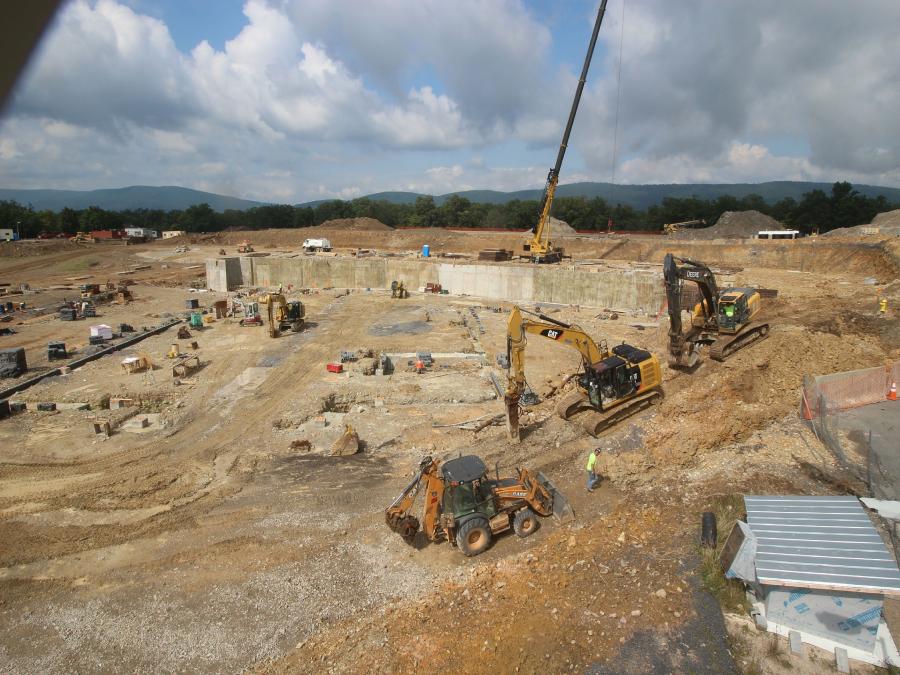 A brand new high school is taking shape on the site of a former hospital in Cumberland, Md., which is located in Allegany County in the western part of the state.

Work began on the Allegany High School project on May 24, 2016, and completion is expected by May 25, 2018. The full dollar amount is $50.78 million and the contract was awarded to Leonard S. Fiore Inc., Altoona, Pa. Dustin Ott is the project manager.

The new facility will replace the current Allegany High School, which is located at 616 Sedgwick St. in Cumberland. Allegany was constructed in 1925, and will have continuously housed students for 93 years when the students are moved to the new school in 2018. The limited 12-acre site of the current school is landlocked between a cemetery and a cliff which drops off to the Western Maryland Scenic Railroad tracks below.

The school board selected the site of the former hospital for the school, and the architects, Grimm & Parker, ultimately decided to build a new facility, in part because the building systems required for health care facilities are very different from those for schools.

In May 2013, the school board heard a presentation from Grimm & Parker regarding their vision for the new Allegany High School. The values of the project were determined by gathering input from various stakeholders including student and community forums and the formation of a core planning committee. A collaborative design charrette was held to assist the architects in aligning the values and facts of the program. Several ideas were eliminated, and the architects took the important pieces from each potential design model to create a tentative design that encompasses the core values.

The guiding principles of the project were noted as follows:

• A modern 21st century character that celebrates its unique hilltop setting and views, embracing the legacy and regional heritage of Allegany High School;

• A variety of student-centric spaces and common areas that allow for a full-range of activities and showcase students' work and talents;

• Flexible and adaptable learning spaces that utilize integrated technology and accommodate a variety of teaching methods;

• A variety of outdoor spaces for athletics, student gathering and activities, and environmental learning;

• A design approach that combines energy conservation, value, and resource management; integrating these core values throughout the building and curriculum as an educational tool.

According to Vincent G. Montana, director of facilities for the board of education of Allegany County, the fact that the elevation across the 24-acre site drops 68 ft. (20.7 m) has presented a challenge. Three major retaining walls have been constructed to level the areas which will become the athletic fields.

The site was formerly occupied by a 250-bed, 500,000 sq. ft. (46,451.5 sq m) hospital complex. Phase One of the project consisted of hazardous material remediation and the demolition of the hospital, including the ancillary buildings. The $2 million demolition was completed in the fall of 2015 by Total Wrecking & Environmental LLC of Tonawanda, N.Y.

The new school is designed to LEED Silver standards, and recycling of the demolition materials was an integral component of the LEED certification.

Approximately 60,000 tons (54,431 t) of concrete was crushed on site and stockpiled for the construction project. The crushed concrete has been used to level the areas where the athletic fields will be constructed. Only 4.8 percent of the demolition material was sent to a landfill.

“I want to thank [Maryland] Governor Larry Hogan, Secretary David Brinkley, the Board of Public Works and Dr. David Lever for their strong support and efforts to make the new Allegany High School construction project a reality,” said Maryland Sen. George Edwards. “This building is critical to replace what is probably the oldest school in the state in current operation. Modern facilities are an important part of educating our youth.” CEG