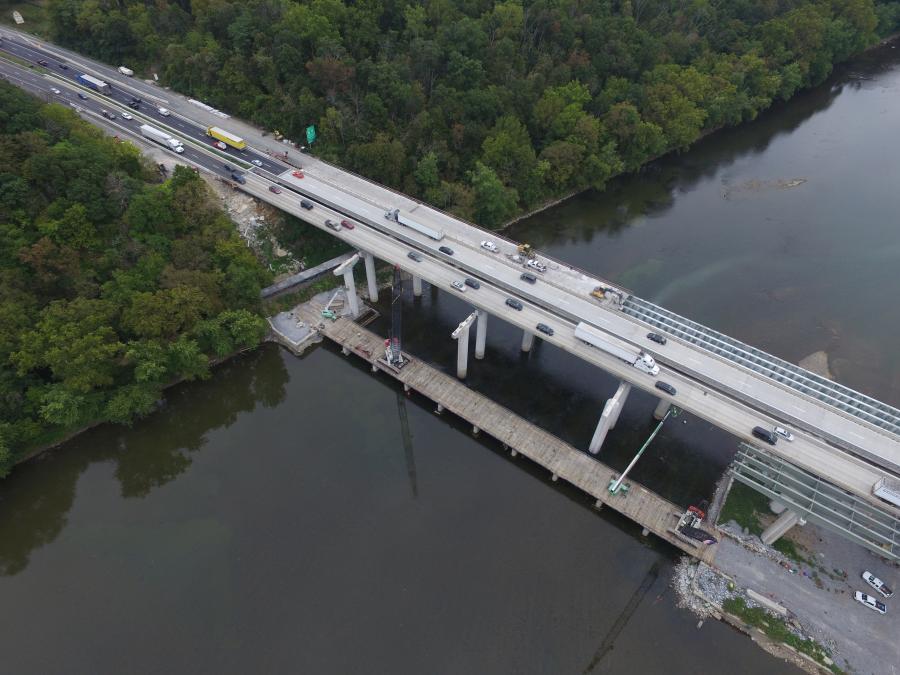 The I-81 bridge project, which includes spans for northbound and southbound traffic, stretches from Williamsport in Washington County, Md., across the river to Falling Waters in Berkeley County, W.V. (MDOT photo)

Widening and rehabilitation construction on the Interstate 81 bridge project across the Potomac River between Maryland and West Virginia is about 88 percent complete, according to the Maryland DOT's State Highway Administration.

Construction began in the fall of 2016 and, according to the Maryland agency, the road and structure work is expected to be finished in December.

The cost to build the new twin bridges and 5 mi. of improved freeway is $87.1 million, with Maryland sharing the cost about 73/27 percent with West Virginia.

The I-81 bridge project, which includes spans for northbound and southbound traffic, stretches from Williamsport in Washington County, Md., across the river to Falling Waters in Berkeley County, W.V.

The original, single I-81 bridge was opened in 1965 and, while still deemed structurally safe in 2016, the two states determined it had reached the end of its useful life.

MDOTSHA and its prime contractor/partner, Triton Construction Inc., in St. Albans, W.V., replaced the old bridge decks and structural steel on the Potomac River structures, as well as built an additional lane on each bridge.

Crews currently are working on constructing the second half of the northbound river bridge and are completing earthwork and roadway construction activity.

Curb work on nearby Maryland Route 68 is being done behind a barrier and painting a second new bridge built on the shared MD Routes 68/63 has not yet begun.

MDOTSHA said there were no setbacks to the construction due to COVID-19.

Maryland also worked closely with the National Park Service's C&O Canal staff to ensure there was limited disturbance to the historic tow path running along the Potomac and under the interstate bridge work.