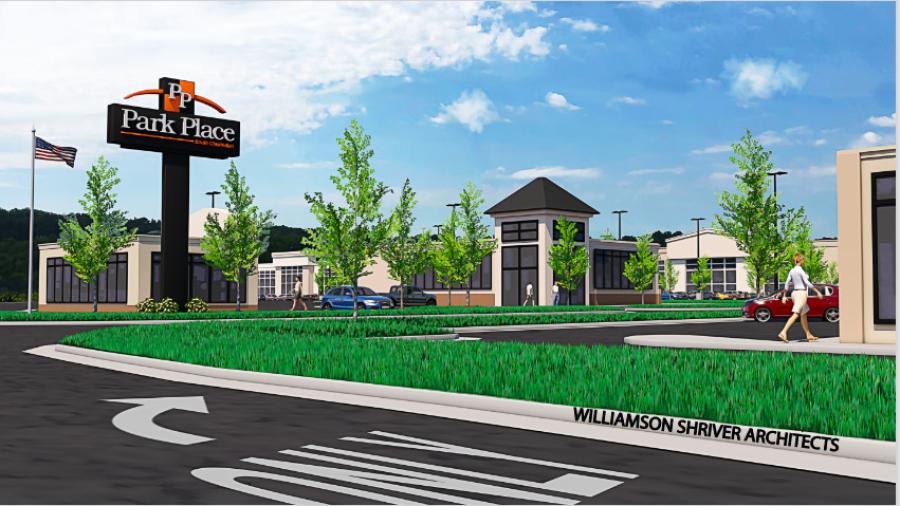 The new Park Place shopping complex along U.S. Route 60 will be located at a site that formerly was a fly ash pond.

As a result of the West Virginia Parkways Authority recently selling a total of $423 million in bonds to investors, the money is required by state law to finance highway construction projects in the 10 counties close to the West Virginia Turnpike.

One of the projects listed is $19 million to build a new roadway and bridge to ease congestion in the Davis Creek and Corridor G area in Kanawha County, a long-talked-about effort to ease traffic congestion in the area.

South Charleston Mayor Frank Mullens told WCHS News Network that, when completed, the project will give drivers another way to exit the Trace Fork/Dudley Farms shopping areas to Jefferson Road in his town.

"We've all done it, when you get to that shopping complex up there you get backed up in that parking lot sometimes and it takes a long time to get out," he said. "Now we'll have another way to get out of there."

It is one of several new construction projects on the drawing board in the South Charleston area.

According to WCHS News Network, the WV Parkways Authority also has announced the newly sold bonds will provide funding for a $203 million project to build the Pineville-to-Welch section of the Coalfields Expressway, along with partial funding for the Beckley Z-Way, improving U.S. Highway 60 between Chelyan and Montgomery, and the replacement or improvement of eight different bridges.

Another locally important project planned for South Charleston in the same area is an upgrade to Jefferson Road. Reportedly, the state's Division of Highways (DOH) has the roadway improvement under bid, but Mullens said he has seen little activity along the route.

"We were told back in January by [DOH] that we would see a lot of action there this spring, [but] obviously that didn't happen," he remarked to the statewide radio news service. "I know they're still working on things. I can assure you I'm as frustrated as anybody in the delay of getting things started."

Meanwhile, Mullens noted that fill dirt could be moving as early as the end of the July from the West Virginia Regional Technology Park in South Charleston to the site of the new Park Place shopping complex along U.S. Route 60 at a site that was a former fly ash pond.

He reported there will be 900,000 cu. yds. of fill available from the Technology Park property where work is under way to create a 14-acre site for future construction. Once that dirt is available to be transported, he said, construction can begin at Park Place.

"That's our last phase to having a pad-ready site to turn over to the private sector," Mullens noted, adding that the Park Place developers are "really close to finalizing our first two deals for tenants."

South Charleston had counted on using the fill dirt created by the Jefferson Road project, but the city's mayor said that changed when it became obvious the highway construction was nowhere near being ready to go.

"We kind of anticipated this may happen and when you're working with all of these national retailers [interested in Park Place], they have these construction timetables in place," Mullens said to WCHS News Network. "We couldn't keep pushing it back. We had to have a timetable we could control."