Oldest Masonry Bridge in Rhode Island Gets a Makeover

The bridge is in such disrepair, the state in 2013 closed half the bridge and installed temporary traffic signals for a single-lane alternating traffic pattern on the bridge. 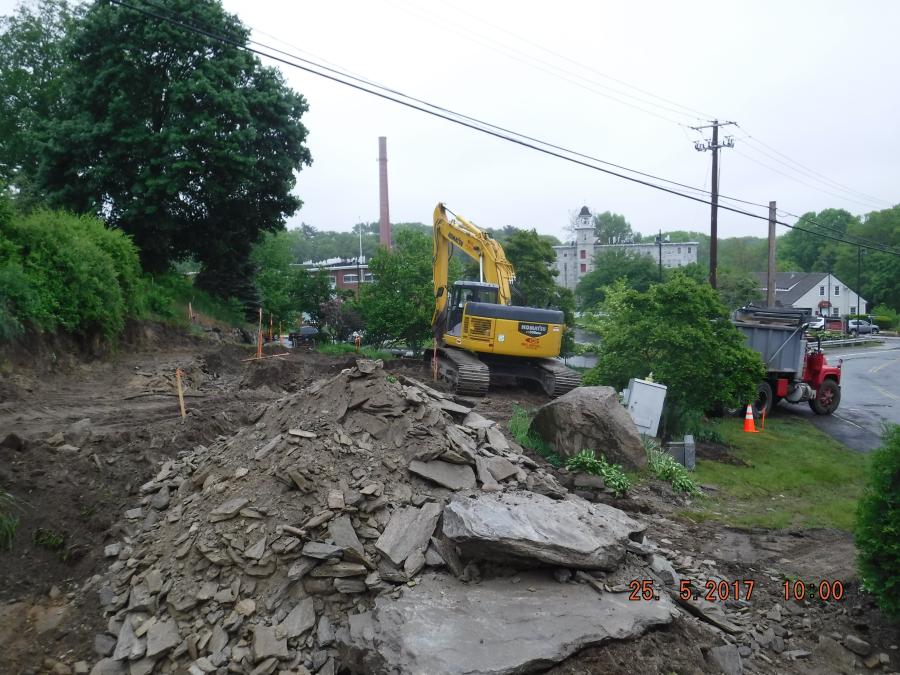 Work is under way to rehabilitate the oldest masonry bridge in Rhode Island.

Work is under way to rehabilitate the oldest masonry bridge in Rhode Island.

The historic Slatersville Stone Arch Bridge was built in 1855, but has been deemed structurally deficient since 2007, and because of that, a 20-ton weight limit is in place. The bridge carries approximately 8,000 vehicles per day.

“The bridge is in such disrepair, RIDOT in 2013 closed half the bridge and installed temporary traffic signals for a single-lane alternating traffic pattern on the bridge, causing traffic delays in the village,” said Charles St. Martin, spokesman for the Rhode Island Department of Transportation.

The bridge was fully closed to traffic as of May 1. It will remain closed until July, but additional closures will occur later in the project.

“RIDOT's project will rehabilitate the structure so it no longer will be deficient nor carry a weight limit,” St. Martin said. “The schedule includes closing the bridge twice during the three-year project, an approach that will shave a year off the project's construction timeline.

“Additionally, a major component of the project involves the restoration and reinforcement of the existing stone arches, which support the 150-foot long bridge. RIDOT was required to rehabilitate rather than replace the bridge in order to maintain its historical integrity as the bridge sits in Slatersville Historic District. The total cost of the project, taking into account added costs associated with accelerating the project, the historic preservation efforts, and additional steps to meet environmental restrictions, is $13.5 million.”

According to a fact sheet on the project, work on the bridge roadway will include saw cutting of pavement; the removal of curbs and sidewalks; the installation of granite curbs and a concrete sidewalk; the installation of new hot mix asphalt pavement; new signs and pavement markings; the reconfiguration of the intersection of Providence Pike and Main Street; the installation of gravel; adjustment of utility structures; new drainage structures and pipes; maintenance and protection of traffic; the construction and landscaping of the bituminous access ramp between Route 5 and Main Street; relocating both underground and overhead utilities; and construction of stone retaining walls.

The wider superstructure will consist of a series of new precast concrete panels placed on top of new concrete fill material over the existing stone arch. The panels will have a concrete barrier along each of the curb lines and a sidewalk behind the barriers.

Additional bridge construction will include moment slabs along the roadway approaches to anchor the two-bar bridge traffic railing; reconstructing stone spandrel walls to meet the underside of the new concrete panels; constructing approach slabs, repairing portions of the existing channel walls; and cleaning and repointing the arch stones. The project will mainly be built during the day, but some night work will be required for paving operations.

“It's one of the bridges in our Rhode Works program,” said St. Martin. “The 10-year project addresses deficient bridges and roadways. We have a high percentage, just under 24 percent, of structurally deficient bridges. The federal standard is no more than 10 percent of a state's bridge inventory should be considered structurally deficient. This program gets us within the 10 percent by 2025. The whole Rhode Works program is 10 years. We have a 10-year planning process, and each year the 10-year block goes forward one year.”

The Slatersville Stone Arch Bridge project is a three-year project with an anticipated completion date of July 2019.

“Working with the community and closing the bridge helps us shave time off the project,” St. Martin. “It is a big old structure in a historic district. We never considered ripping it out and putting in an average bridge. The community wouldn't want us to do it and we wouldn't want to either.”