Paradise On the Rocks 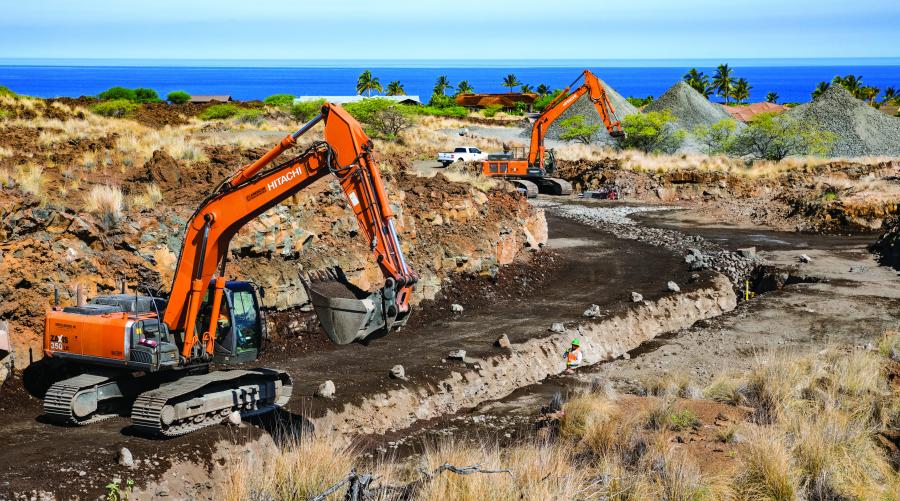 As a family-owned general contractor with more than 95 years of experience, Goodfellow Bros. Inc. (GBI) knows how to take on challenging terrain, whether working in Washington, Oregon, California or especially Hawaii. And the company relies on its Hitachi excavator fleet to tackle Hawaii's tough lava rock environment.

The company first started using Hitachi excavators more than 20 years ago and hasn't looked back.

“Cost effectiveness and power — those are our top two things we look for, especially with excavators, so Hitachi is great for us,” said Shepherd Nelson, GBI equipment asset manager. “Our operators love them.”

Lately, GBI's Hitachi fleet has been busy powering though several high-profile projects on the Big Island.

Hawaii's Queen Ka'ahumanu (Queen K) highway expansion is no ordinary project. GBI first won the bid for the project more than five years ago. However, after the discovery of artifacts and trails on the site, the project was halted, redesigned and went out for re-bid. Once again, GBI secured the project, which has grown into a $105-million job and is estimated for completion in summer 2018.

Hitachi excavators ranging from a ZX245USLC-5 reduced-tail-swing model up to a ZX470LC-6 have been put to the test on the highway project and have garnered some attention.

“At one time on this project, we had about eight Hitachis working, and it was awesome to see those orange sticks moving back and forth, ripping,” Cox said. “We had a lot of compliments from people driving up on the highway and seeing all the Hitachis. I even got calls from the mainland saying, 'Wow, looks like you've got an orange show on that project.' And we were really proud of that.”

As an island with a rich history, Hawaii comes with some cultural nuances. The existing archaeological sites in the area affected the project's original timeline as well as its design. For example, a massive retaining wall was added to protect the archeological sites. As the project continues to move forward, GBI works with an archaeologist and a cultural monitor assigned to each working machine on the job.

“The history of the land is explained before anyone begins work on the job, and material is monitored as it is being excavated,” Nelson said. “Working in Hawaii, it's important to us to be culturally responsible to meet the community needs. Each of our jobs is blessed by a 'kapuna,' or spiritual leader, before our Hitachi excavators go to work. We want to be the contractor of choice for the community and do right by the 'aina,' or land.”

Cox added that another part of doing right by the land and ensuring the project's success is having the right equipment.

“I love this company because they take care of our employees and get us the right tools,” Cox said. “And the right tool is the Hitachi. For our region, all our operators request Hitachi. Having the right tool for the job is a good thing!”

As GBI makes progress on the Queen K highway project, more of its Hitachi fleet is digging the way for multi-million dollar views in a new subdivision in the Manini'owali section of the exclusive Kuki'o Golf & Beach Club in Kona.

For the subdivision, GBI is building 20 housing pads ranging in size from 0.6 to 1.2 acres on 4- to 5-acre lots that will be worth approximately $2 million each. The lots will eventually hold homes estimated around $15 million with unbelievable ocean views.

Before those views can be enjoyed, Hitachi excavators ranging from a ZX135USLC-5 up to two ZX470LC-5 models are tackling approximately 100,000 cu. yds. of rock excavation along with 3,500 lineal ft. of roadway, potable water, irrigation, gravity sewer and underground electrical.

Several ZX350LC-6 excavators are the primary workhorses in the lineup. Because of the lava rock terrain and a no-blasting restriction, the machines must rip and hammer before digging. Sean Landers, GBI project manager, said the Hitachi excavators are a good match for the demanding work.

“The beauty about the Hitachi excavators is they're super versatile,” Landers said. “We've got them hoe-ramming, ripping rock out of the ground, digging trenches, loading trucks and backfilling trenches.”

Greg Bennett, a GBI operator with 10 years of experience, enjoys running a ZX350LC-6 on site as well as other Hitachi equipment. “Hitachis are the quickest and have the best power-to-speed ratio,” Bennett said. “The controls are sharper and more accurate than other kinds of machines. Overall, Hitachi always gets the job done.”

With GBI's Hitachi fleet at work, Landers is not intimidated by the project's tight timeline.

“Having the reliability of the Hitachi machines has helped us to essentially accelerate our schedule,” he said. “We're on track to finish on time or even a little bit earlier right now.”

Along with relying on its equipment, GBI also depends on its local dealer to help keep jobs moving forward.

“The guys at American Machinery are amazing partners,” Nelson said. “We work with them and dial in on preventative maintenance.”

Landers agrees and experiences the support first-hand on projects.

“Out here we're in rock on a Pacific Island, and we're dealing with some pretty harsh conditions,” he said. “And the one thing we can always count on is for American Machinery to be there for us. They're always there to help us keep moving.”

(This story was reprinted with permission from Hitachi's Breakout Magazine, Winter 2017 issue.)