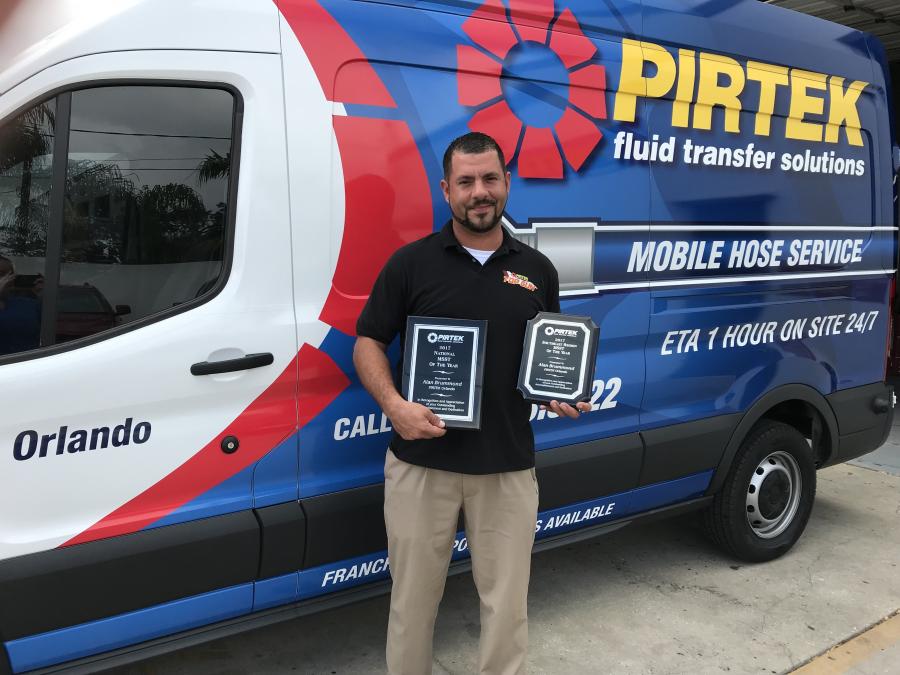 PIRTEK also recognized Alan Brummond of PIRTEK Orlando as a top performer for 2017.

PIRTEK has honored Ernesto Osorio of PIRTEK Doral (Miami area) as its top-achieving operations manager of the year, and Alan Brummond of PIRTEK Orlando as its top mobile sales and service technician (MSST). The company also recognized high performers from the various PIRTEK USA regions.

The company's 2017 competition — the Operations Manager of the Year and Best of the Best — was based on sales increases measured from Aug. 1 through Nov. 30.

Osorio credits teamwork for helping him achieve high success as an operations manager.

“I've had the pleasure of counting on two fundamental resources,” he said. “The first is a general manager like Carlos Shortt, who has helped and supported me at all times. The second is our MSST team and our administrator. They've put in a lot of effort to bring the company to the top. Our team shares a common interest in excellence: keeping the customer satisfied. Those customers keep calling us again and again.”

He added that PIRTEK Doral faced some operational challenges when Hurricane Irma swept into Florida, but a concentrated effort and collaboration with the corporate office got them through the ordeal.

“Thanks to our work as a team and the help of PIRTEK USA, it was possible to achieve everything that had to be done at that difficult time,” he said.

The criteria for winning the awards entailed several performance metrics, including sales.

Brummond, the MSST honoree, has won the award two consecutive years, a feat he calls “one of my greatest achievements.”

“To win one year is hard, but to do it twice is unthinkable unless you really push yourself,” he said. “The most important thing to do is keep your customers happy, and always push yourself to make that extra sale. If you are there on site already and you see more work to be done, do it. Even if you are tired and it's the end of the day on a Friday, get it done — it truly does pay off.”

PIRTEK also honored the top operational managers and MSSTs from each region.

The 2017 Regional Operations Managers of the Year are:

The 2017 Regional MSST of the Year awards winners are:

“I want to congratulate the many people who gave their all in this competition,” said Glenn Duncan, CEO of PIRTEK USA. “They make us proud. Our people embody the spirt of PIRTEK, always striving to achieve their highest in every situation. A job well done.”

Winners of the competition will all receive awards and prize packages.