When completed, the Maryland line will run from New Carrollton to Bethesda. 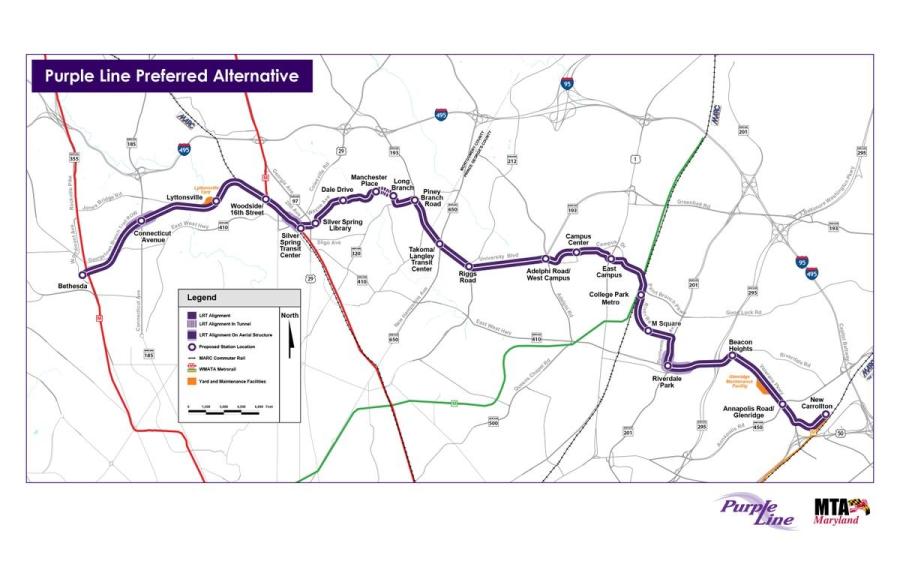 Maryland Gov. Larry Hogan gave the green light to the Maryland Department of Transportation in March for the Purple Line light rail project.

Maryland Gov. Larry Hogan gave the green light to the Maryland Department of Transportation in March for the Purple Line light rail project. When completed, it will run from New Carrollton to Bethesda. Following a competitive bid process, the administration selected Purple Line Transit Partners for the 16.2-mi. (26 km)-long transit system in Montgomery and Prince George's counties.

In his original announcement in June 2015, Gov. Hogan set three points that had to be met for the final approval of the project: additional financial support from local governments; reserved federal funding; and aggressive pricing from the successful team.

“After eight months of hard work and tough negotiating, the Maryland Department of Transportation has met all three of the needed requirements and delivered a cost-effective Purple Line with a strong commitment from our federal, county and private partners,” Gov. Hogan said.

Because of negotiations with Purple Line Transit Partners, an agreement has been set that will be less than the original figure. Maryland's upfront expenditure will be $159.8 million, which is down $8 million from the $168 million figure Gov. Hogan originally announced.

In addition, average annual availability payments will be $149 million, also down from an earlier estimate of $167 million over 30 years. These payments will cover financing, operations, maintenance, and future required capital repairs and replacements for the Purple Line.

Adding to the state funding, Prince George's and Montgomery counties have pledged a combined $330 million in cash and non-cash contributions for the project. The federal government also has reserved about $900 million for the Purple Line in New Starts Funding. In the most recent announcement of President Obama's budget, $125 million was recommended for FY 17, which would bring the total federal funding to date to $325 million to be appropriated for the Purple Line.

According to the governor's office, the state has reduced overall costs during the 36-year life of the agreement by more than $550 million. With an expected $1.36 billion in fare revenue along with local and federal contributions to the project, the final costs for the state over the 36 years will be about $3.3 billion.

“The Washington metropolitan region is one of the most congested areas in the country, and viable transportation alternatives are needed to accommodate a growing population,” said Foxx.

“When completed, the Maryland Purple Line will connect residents in Montgomery and Prince George's counties, Maryland, with improved access to jobs, education, and medical care and, overall, will help improve the quality of life.”The Purple Line is expected to open for service in spring 2022.

“Purple Line Transit Partners is proud to partner on this project that demonstrates how the public sector can join forces with the private sector to deliver innovative projects at a fixed price with a guaranteed schedule, all while transferring operations, maintenance and performance risk to the private partners,” said Herb Morgan, CEO of Purple Line Transit Partners. “This approach leverages private investment, provides high service levels, and reduces the overall public costs. Our team is committed to working collaboratively with stakeholders in the many communities we will serve and starting construction quickly to deliver this world-class project.”

The Purple Line will provide a direct connection to the Metrorail Red, Green and Orange Lines at Bethesda, Silver Spring, College Park and New Carrollton. The Purple Line also will connect to MARC, Amtrak and local bus services. A total of 21 stations are planned, and 69,000 total daily riders are expected by 2030.

While MTA is taking the lead on this project, the team that includes the Washington Metropolitan Area Transit Authority, Montgomery and Prince George's counties, the Maryland-National Capital Park and Planning Commission, the State Highway Administration and local municipalities in the project area.