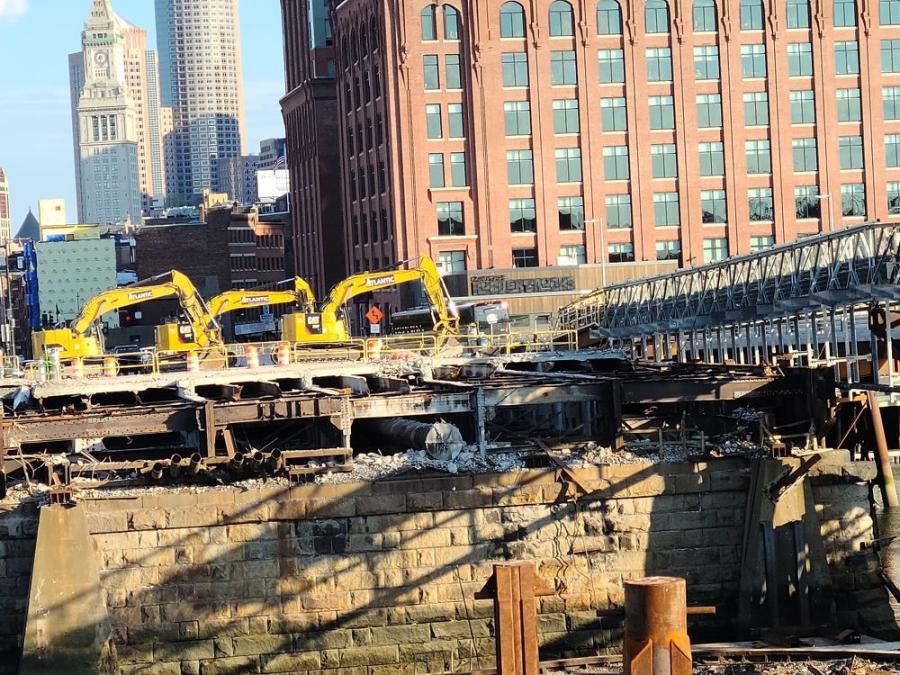 Built between 1898 and 1900, the North Washington Street Bridge Street in Boston has been demolished and is being replaced by J.F. White Contracting Co. through a $177 million-plus contract that was awarded by the Massachusetts Department of Transportation (MassDOT).

Built between 1898 and 1900, the North Washington Street Bridge in Boston has been demolished and is being replaced by J.F. White Contracting Co. through a $177 million-plus contract that was awarded by the Massachusetts Department of Transportation (MassDOT).

The 1,089-ft. long and 66-ft. wide bridge with plate girder bridge approaches, a truss swing span and 12 spans in total (two-lanes in each direction, with a sidewalk on each side) had been maintained by the city of Boston. The old bridge, which spanned the Charles River, carried more than 38,400 cars and trucks daily. 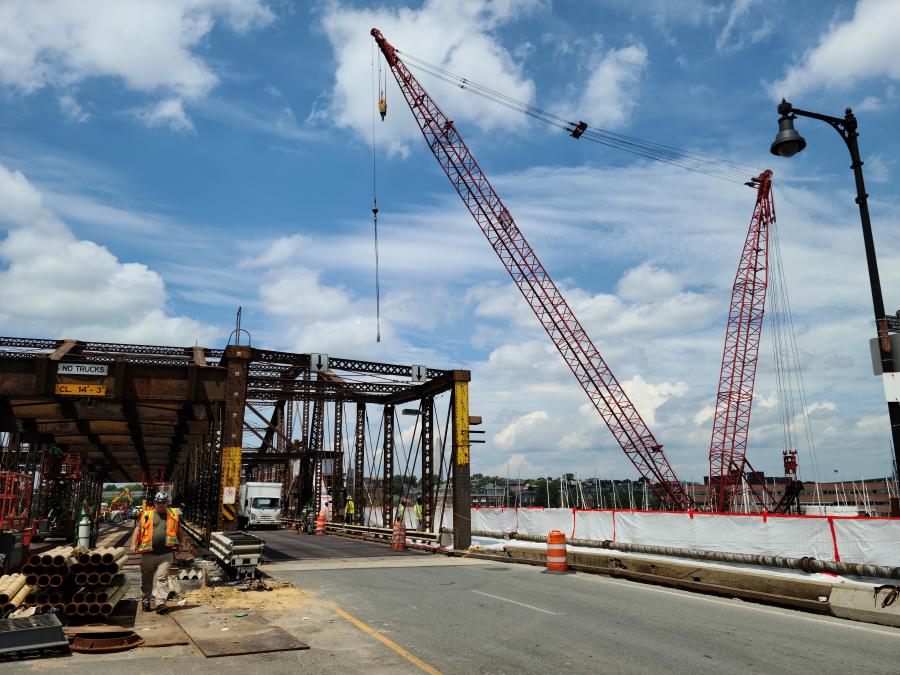 "After more than 100 years of service, we are replacing the North Washington Street Bridge with a new bridge for the 21st century," MassDOT said. "The new bridge will be a complete street over water that works for everyone: people driving, riding the bus, biking, walking, sightseeing, boating and living nearby. Whether you walk the Freedom Trail to dinner in the North End, take a bus from Chelsea or Charlestown, drive your kids to school, or kayak in the Harbor, the North Washington Street Bridge is a key part of daily life. But it has been struggling to fulfill those purposes: the center bay has been closed since 2003, and since fall 2017, ongoing emergency repairs by the city of Boston have further restricted lanes. It is due for a well-deserved retirement."

The bridge has been reconfigured and repaired multiple times to extend its lifespan, including the permanent closure of its swing span in 1961, the removal of the elevated Orange Line in 1977 and the closure of the center bay in 2003.

In its current condition, including emergency repairs, the bridge costs the city between $3 to $5 million each year to keep safely operational, and MassDOT has determined that the bridge must be replaced to ensure safety, accessibility and long-term serviceability.

A combination of MassDOT and Federal Highway Administration funds are financing the project.

The work began in August 2018 and is expected to be completed in Spring 2023. So far, crews have completed the demolition of the old bridge, the relocation of Paul Revere Playground outside the limits of the project and utilities to temporary utility bridge, the removal of the west sidewalk and the construction of a nearly 1,000-ft. long temporary bridge between existing span and Charles River Dam and Locks, on the Boston Harbor side of the old bridge, with an 11-ft. wide lane for MBTA's train line two 11-ft. wide travel lanes for vehicles, and the construction of an 8-ft. wide sidewalk.

As part of Stage 2, July 2020–November 2021, vehicle and pedestrians traffic was diverted to the temporary bridge between July 17-19, and the demolition of old bridge and construction of new bridge, except for the southwest corner next to the Prince Street Park and tennis courts, is ongoing.

"When completed, the bridge will provide two inbound travel lanes and two outbound travel lanes for general purpose traffic, an inbound exclusive bus lane — the first on a bridge in the Boston area, separated pedestrian and bicycle facilities on both sides of the structure, scenic overlooks facing the harbor and Charles River, and plantings for a ‘complete street over water,'" according to MassDOT. "The structure will also improve water flow and conditions for boaters by reducing the number of piers in the water from 12 to five, and widening the navigation channel to 141 feet." 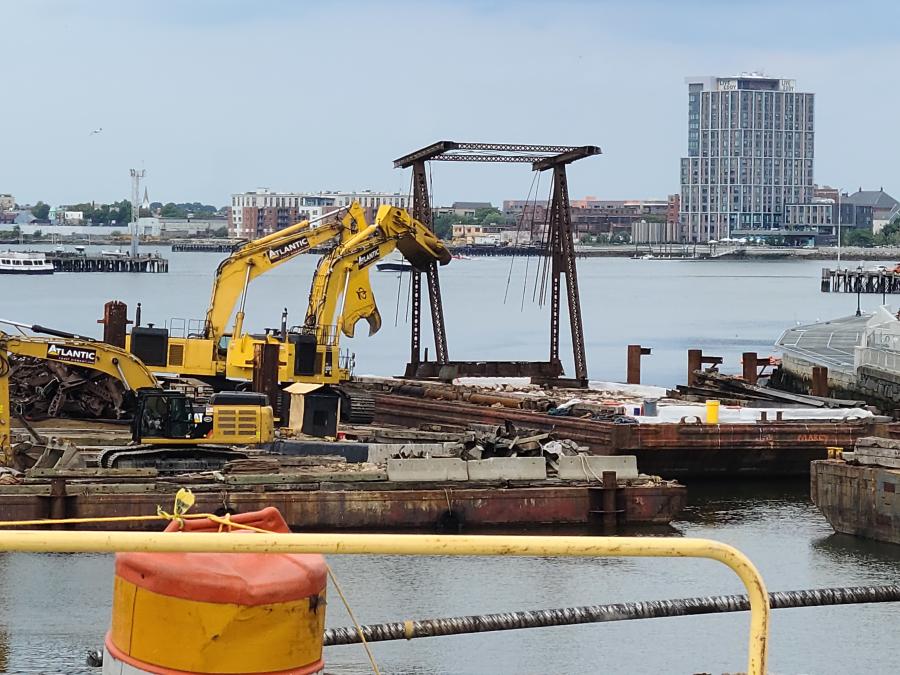 Boston and MassDOT undertook a joint planning process from 2004 to 2017 that included coordination with local, state and federal agencies and extensive public outreach to design the new bridge, including well attended public meetings in 2016, 2016, 2018, and some held this past June and July.

Planning and design for the new bridge were completed prior to the start of construction by architect Miguel Rosales in collaboration with Alfred Benesch & Co.

The traffic control plan includes lane, bike path and sidewalk reconfigurations and closures with a well organized campaign via social media and websites to alert motorists and area residents and business about upcoming construction work and traffic impacts. The work zone covers the bridge area for the demolition and reconstruction.

Construction of the temporary bridge began in May 2019 and was completed last April. Opened to traffic last summer (July 17), it will be in place for approximately two years until the new bridge is constructed. Similar structures were built for previous MassDOT projects such as the Fore River initiative in Medford.

The bridge has two lanes inbound to Keany Square and a single outbound lane to City Square, which is comparable to the situation in the summer of 2017 when emergency repairs were required for the structure of the old bridge. The paved lanes match the standards of Boston streets.

The bridge, according MassDOT, eliminates Stage 1B (one lane in each direction), expedites construction by approximately six months and bridge demolition and the installation of 40 drilled shafts; eliminates the need for a trestle adjacent to Charlestown Marina; reduces the number of major traffic and pedestrian shifts (five to three), nighttime lane closures, and the need to use the structurally deficient bridge for traffic; and provides a new public playground away from the active construction site

"Maximum noise levels allowed are specified in the contract, varying by time of day, with the lowest levels allowed overnight," said MassDOT. "Additional requirements and provisions are in place for the control of dust, hazardous materials, water quality, rodents and other potential impacts of construction"

The original plan was to perform construction in multiple phases.

"MassDOT's contractor proposed a plan to reduce the number of construction phases and contract completion time by constructing a temporary vehicular and pedestrian bridge and it is in use," said Kristen Pennucci, communications director, MassDOT. "Major challenges included: temporarily relocating all utilities to a separate temporary bridge in a critical time frame, so as not to delay the project schedule and maintain uninterrupted service to customers, which was achieved. Another was getting all the required permitting to allow the construction of the temporary bridge. Work started on the west side with removal of the existing bridge sidewalk and partial removal of the LoveJoy Walkway below( adjacent to the Converse Building), to commence construction of the temporary utility and vehicular bridges."

Many large cranes have been utilized for both demolition of the existing bridge and installation of the new structure.

"Manitowoc cranes, such as the Manitowoc 4100 Ringer, was used for demolition operations, while Manitowoc 999 Series 3 cranes will be used to install bridge foundation elements, and eventually, a Manitowoc 4600 Ringer to install new permanent structural steel," said Pennucci. "These cranes have provided flexibility and efficiency in performing these activities on such a large scale." 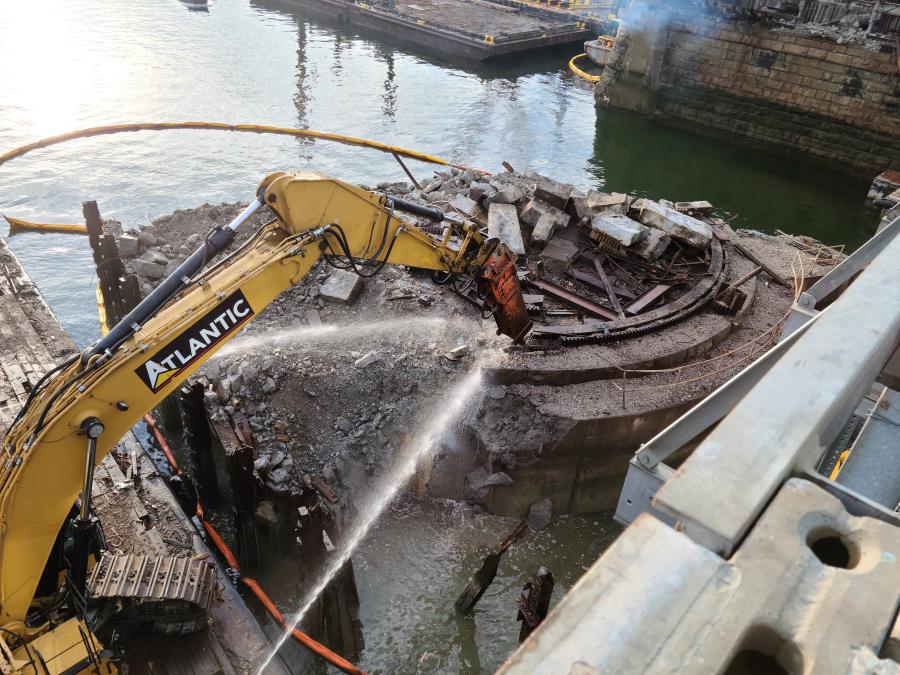 The heaviest effort of the demolition dealt with the removal of the superstructure and piers. The effort was a 24/7 operation that compressed the impacts to abutters, with demolition shifts between 7 a.m. and 10 p.m. and the rest of the time was used to position barges and other equipment for the next day's work.

Environmental monitoring was conducted by a third-party monitor in compliance with all applicable permitting and regulations — state and federal.

"Once the deck and stringers were removed, the plate girders were removed with the ringer," he added. "As soon as concrete piers in the water were opened up from the steel removal, we began to hammer and clam these. Once the piers were taken below water, we utilized underwater kits for the hydraulic hammers. We utilized our multi-beam sonar boat to perform bathymetric surveys as the demolition progressed to ensure all foundation elements were removed to the limits provided by MassDOT."

O'Hearn noted that the demolition was completed ahead of schedule.

"Originally, J.F. White provided us with a seven-month schedule," he said. "After some delays with opening the temporary bridge, they asked us if we could accelerate the schedule to 12 weeks. We were able to accomplish this feat."

Stage 3, November 2021– August 2022, will focus on the demolition and construction of the southwest corner of the bridge next to the Prince Street Park and tennis courts, with vehicle and pedestrian traffic switched to the east side of new bridge. Stage 4, September 2022–February 2023, will see the removal of the temporary bridge and the completion of the sidewalks, landscaping, trellis and barriers. 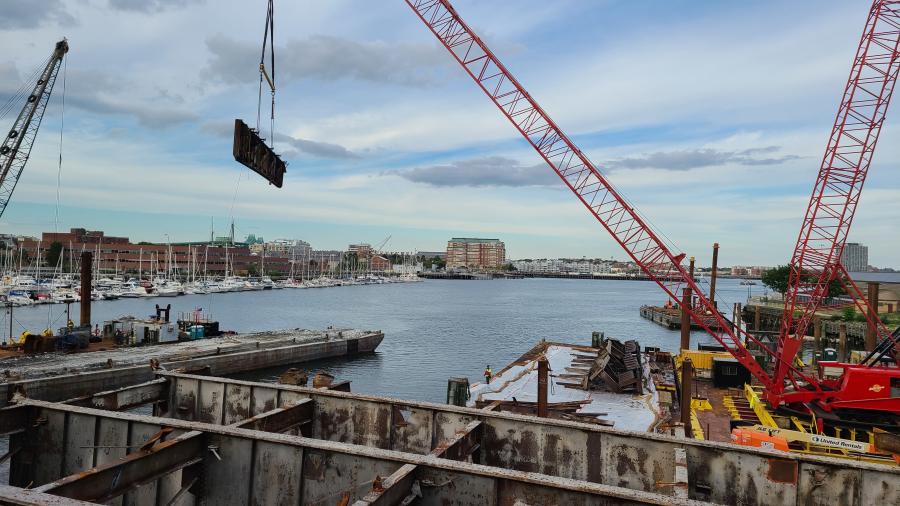 Construction of the new bridge started in early October. Cofferdams will be installed for the new piers, followed by drilled shaft installation, and the superstructure work.

The tallies for the concrete, steel and asphalt to be generated by the bridge demolition and other excavation operations are still being tabulated. The amounts of new materials — concrete, steel, asphalt and others — have not been finalized.

The equipment is being maintained by ACD onsite master mechanics.

"We had a mechanic on site full-time to ensure all equipment was always operating efficiently," said O'Hearn. "Our shop is less than 10 miles from the job, so we also were able to mobilize additional mechanics as necessary. As most of the equipment is constantly greased, we have not seen any effects from the salt water."

J.F. White is and will be using: cranes, excavators, dozers, loaders, pavers, rollers, barges and tugboats, and other standard construction equipment. J.F. White purchases and rents equipment from local and regional dealerships. CEG