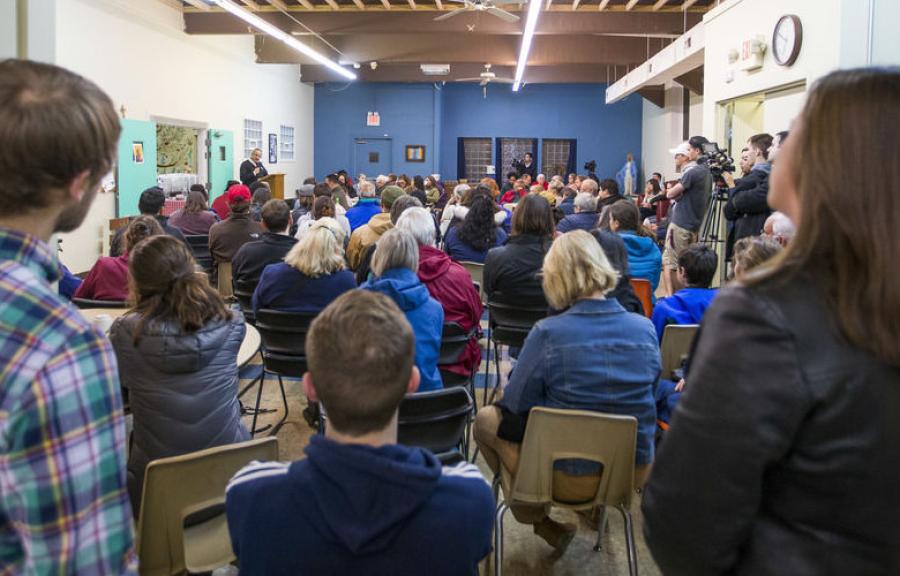 More than 100 people gathered at Our Lady of the Road in South Bend Nov. 30 to show solidarity against construction of the detention center. (Tribune/Robert Franklin photo)

More than 100 people gathered at Our Lady of the Road in South Bend Nov. 30 to show solidarity against construction of the detention center.

“The notion that we need a detention center in order to ensure immigrant compliance is just false,” said Lisa Koop, associate director of legal services at the National Immigrant Justice Center. “We rely very heavily on all of our community members including non-citizens and immigrants and I think that opposing the construction of a private prison is a way of showing that we are a community that values all of its members.”

The facility would be about 10 mi. east of South Bend in Elkhart County. County commissioners say it would have up to 1,200 beds for ICE detainees. They said the facility would be managed by CoreCivic, a private prison company previously known as Corrections Corporation of America.

Richard Aguirre is coordinating a coalition against the center and said his group already has more than 1,000 members.

“We have membership from all over northern Indiana. Strong presence in South Bend, people in Elkhart, Fort Wayne, Michigan, Illinois,” said Aguirre.

Aguirre argued that the center would promote inhumane treatment of people who are in the United States illegally.

If approved, construction for the facility could begin in the spring.