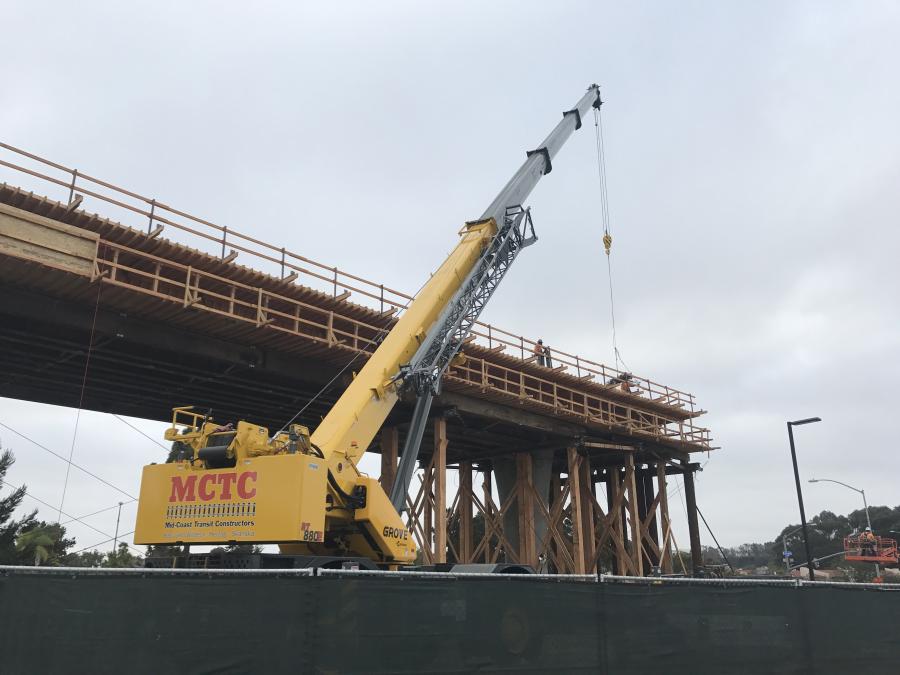 Construction on the Mid-Coast Corridor project began in fall, 2016 and the light rail trolley system is scheduled to roll in 2021. (San Diego Association of Governments photo)

Transit service will be extended from the Santa Fe Depot in Downtown San Diego north to the University City community including Old Town, the University of California, San Diego and Westfield UTC shopping center — a distance of 10.9 mi.

Light rail, also referred to as trolley cars by Blue Line and transit officials, will carry passengers on 22,500 daily linked trips. The number of daily linked trips is forecast to grow to 34,700 in 2035. Annual operating cost for the new system is estimated at $16.82 million. The light rail trains will be electric powered. 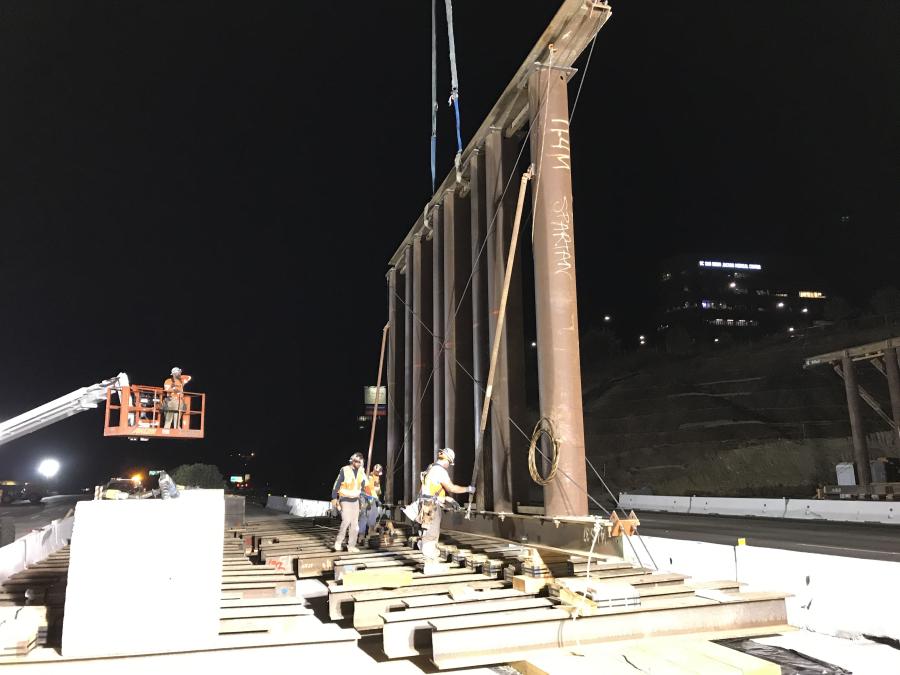 The Mid-Coast Corridor Transit Project was approved in fall, 2014. Construction began in fall, 2016 and the light rail trolley system is scheduled to roll in 2021.

Four of the stations will be built at grade, and five will be elevated stations. The stations will feature rounded canopies and shelters; a ribbed platform; contemporary site furniture; use of natural light; paving using recycled glass; an elevator as the focal point; and low-water landscaping.

The project will not include new at-grade crossings. However, it will feature a minimum of seven new light rail bridges for the at-grade portion of the alignment (south half). The north half of the alignment will be elevated so that portion is considered all bridge.

The Mid-Coast light rail extension has been identified as a high-priority project by SANDAG and is part of the TransNet Early Action Program. TransNet will provide a 50 percent local match to federal funding, which SANDAG is seeking through the New Starts program.

TransNet also will provide operating funds for the Mid-Coast Trolley extension through the year 2048.

Siemens of Florin, Calif., is builder of the light rail train cars. Transit officials ordered 45 new cars with the first nine being used for general MTS purposes. The remaining 36 will be used for the Mid-Coast system. 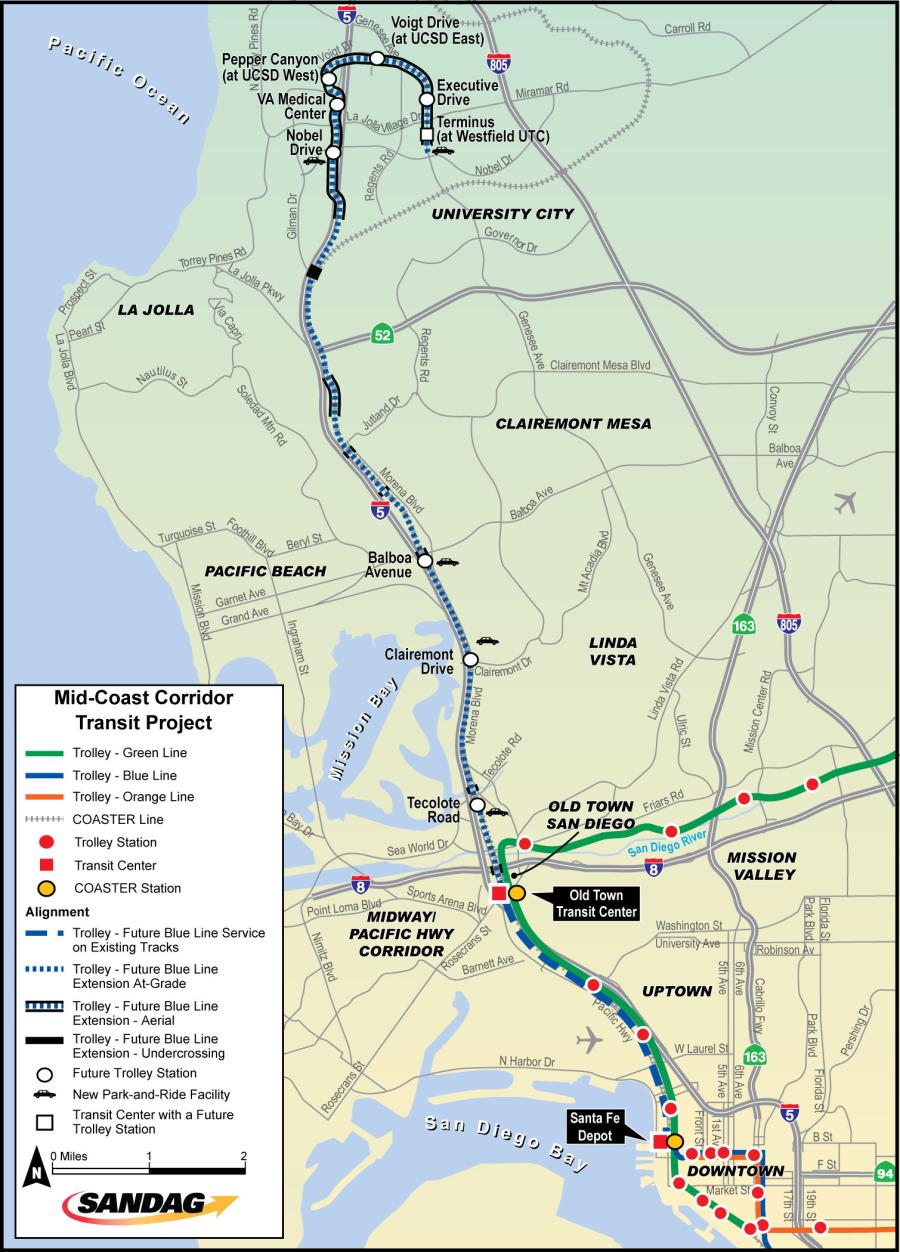 Transit is needed in the growing area. Freeways and arterials in the Mid-Coast corridor are considered generally congested and traffic congestion is projected to increase as the region grows. By 2030, population in the corridor is forecast to increase 19 percent.

At the same time, employment is expected to increase by 12 percent. The University City area has developed as a major employment and high-density residential area similar to downtown San Diego.

Project planners expect the trolley system to provide an effective alternative to congested freeways and roadways, improve public transit services and enhance travel options by connecting the Mid-Coast Corridor with areas by the existing trolley system.

Contractor for the project is a joint venture of top transit builders.The venture is called Mid-Coast Transit Constructors. It is a fully-integrated joint venture of Stacy and Witbeck Inc., Herzog Contracting Corp. and Skanska.

Over the past 10 years the firms have constructed more than 600 mi. of track for passenger rail service. Together, their experience includes more than 30 rail transit projects with a total value of more than $4.7 billion. 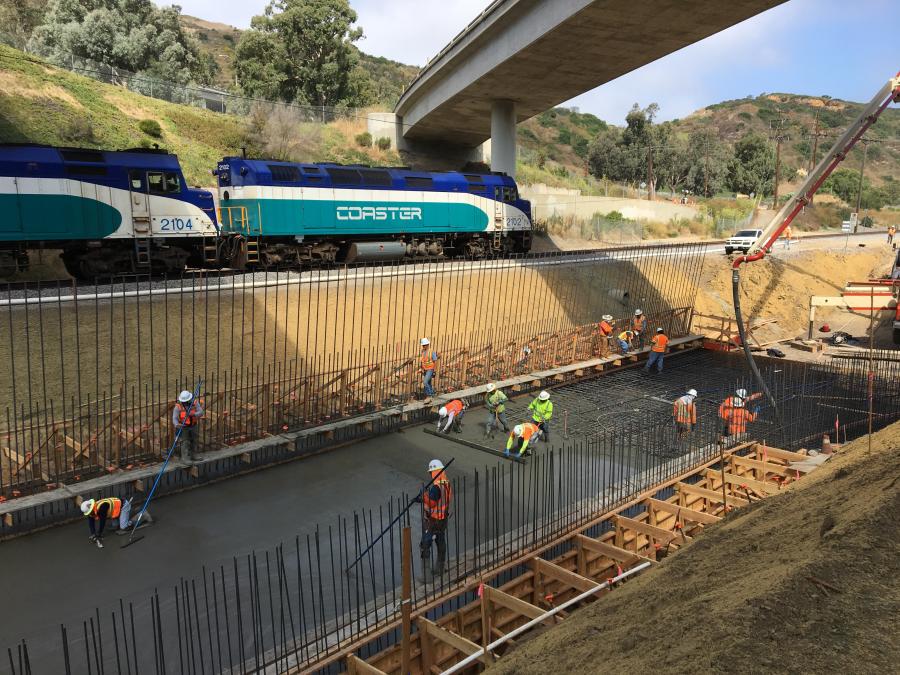 Crews will apply 150,000 cu. yds. of concrete over the course of the project. (San Diego Association of Governments photo)

Between 350 and 400 workers are on the job constructing the light rail system daily. Currently crews are using a full line of heavy construction equipment at the construction sites. Included are cranes, bulldozers, backhoes, cement mixers, drills and delivery trucks.

Crews will apply 150,000 cu. yds. of concrete over the course of the project.

Although construction is extensive, it will not necessitate closing any businesses along the construction route.

Current construction includes underground work. Through summer 2019, construction crews will continue intermittent nighttime work on underground communication and electrical systems for the Mid-Coast Trolley within the railroad right-of-way between Taylor Street in Old Town and Cedar Street in Downtown San Diego. Crews will generally move north to south and will work at each intersection for about one month at a time. General work hours will be Sundays through Thursdays, 9 p.m. to 5 a.m., and some day and weekend work may be required.

Crews will be installing a new traction power substation, which converts power for Trolley operations, at Olive Street near the railroad right of way. That work will also continue through summer of 2019.

The direct economic impact of the project is more than $2 billion.