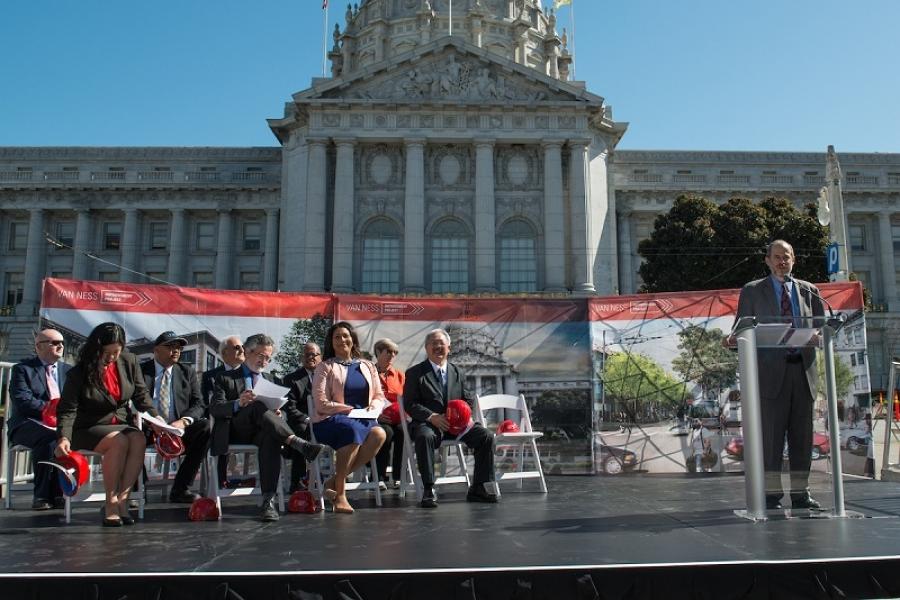 The city of San Francisco broke ground March 1, on the Van Ness Improvement Project, a major civic-improvement project that will revitalize and rehabilitate one of the city’s main corridors.

The city of San Francisco broke ground March 1, on the Van Ness Improvement Project, a major civic-improvement project that will revitalize and rehabilitate one of the city's main corridors.

“This marks a significant step forward in making transit faster and more reliable on Van Ness Avenue,” said Mayor Edwin M. Lee. “We will be improving a crucial travel corridor in San Francisco. When this project is completed, everyone can enjoy a safer, better Van Ness Avenue.”

“I've been a Bus Rapid Transit (BRT) booster ever since a trip to Ecuador with my wife 15 years ago, right around the time that BRT first emerged as a low-cost and effective alternative to light rail,” said Aaron Peskin SFCTA chair. “I want to acknowledge the complete streets nature of the Van Ness BRT project and thank SFMTA in particular for accommodating the community's desire to preserve the historic nature of the street lighting along this vibrant corridor. This is exactly the kind of transportation infrastructure project that voters envisioned SFCTA funding through Prop K sales tax, and I'm delighted to see it break ground.”

“This project is essential to reshaping how San Franciscans get around the city efficiently,” said Ed Reiskin, SFMTA director of transportation. “Van Ness will benefit from better transit, strengthened infrastructure, and safer streets for all.”

“Since moving to the neighborhood in 2009, my neighbors and I have asked for a safer, more efficient Van Ness for people walking, driving or taking transit,” said Alex Wilson, chairman of the Van Ness Bus Rapid Transit Community Advisory Committee. “Today these demands are materializing. I'm excited to see my neighborhood revitalized and modernized through this project in a way that works for all of us.”

The three-year construction project is a result of collaboration between city agencies and will overhaul 2 mi. (3.2 km) of Van Ness Avenue between Mission and Lombard streets. The project began as a package of transportation improvements including the city's first Bus Rapid Transit system. Along the corridor, these improvements are expected to reduce transit travel times by up to one-third and increase reliability and service for the 47, 49, 76X and 90 Muni routes that will use the Bus Rapid Transit system.

In recent years, the Van Ness Improvement Project has grown to include major infrastructure improvements for people who live, work and travel in the area.

San Francisco Public Works and the San Francisco Public Utilities Commission have partnered with the SFMTA to take advantage of the construction on Van Ness to make large-scale improvements to the area. While Public Works will plant hundreds of new trees and entirely repave the street, the Public Utilities Commission will replace and repair some of the oldest water and sewer infrastructure in San Francisco.

“As San Francisco grows, smart transportation is key to keeping our city moving,” said Mohammed Nuru, Public Works director. “The design elements in this project will make this high-travelled corridor safer and easier to navigate.”

The existing water and sewer networks beneath Van Ness are more than 100 years old and near the end of their lifecycles. Failures of these networks can lead to extended service interruptions and cause sinkholes in the roadway. The new networks will improve reliability and reduce their vulnerability to damage from earthquakes, minimizing potential service outages.

Other elements of the project include proven safety features like high-visibility crosswalks and countdown signals for people walking at each intersection along with new sidewalk lighting along the street. Van Ness Avenue is part of San Francisco's high injury network, the 12-percent of city streets where 70-percent of collisions resulting in serious injury or death occur. These features aim to reduce that statistic and make traveling the corridor a safer, more enjoyable experience.

“Kudos to the SFMTA and our partners at the Federal Transit Administration (FTA) and Caltrans on this exciting ground-breaking milestone. The Van Ness Improvement Project is a premier example of the robust federal, state and local partnerships that we need to forge across our nation, to cost-effectively fix our streets, advance Vision Zero and improve transit,” said Tilly Chang, executive director of the San Francisco County Transportation Authority.

Of the total $316 million budgeted for the project, approximately $45 million of the funds come from the FTA's Capital Investment Grant program and $30 million come from the Bus and Bus Facilities program. These grants will help the project deliver more reliable service and shorter travel times for transit riders once construction is complete in 2019. The remaining cost of the project is being covered by state and local sources like San Francisco Proposition K funds, State Highway Operation and Protection Program, Public Utilities Commission Local Funds and SFMTA Revenue Bonds.