Named for two history-making astronauts, the new Jemison High School and McNair Junior High are taking shape in Huntsville, Ala. 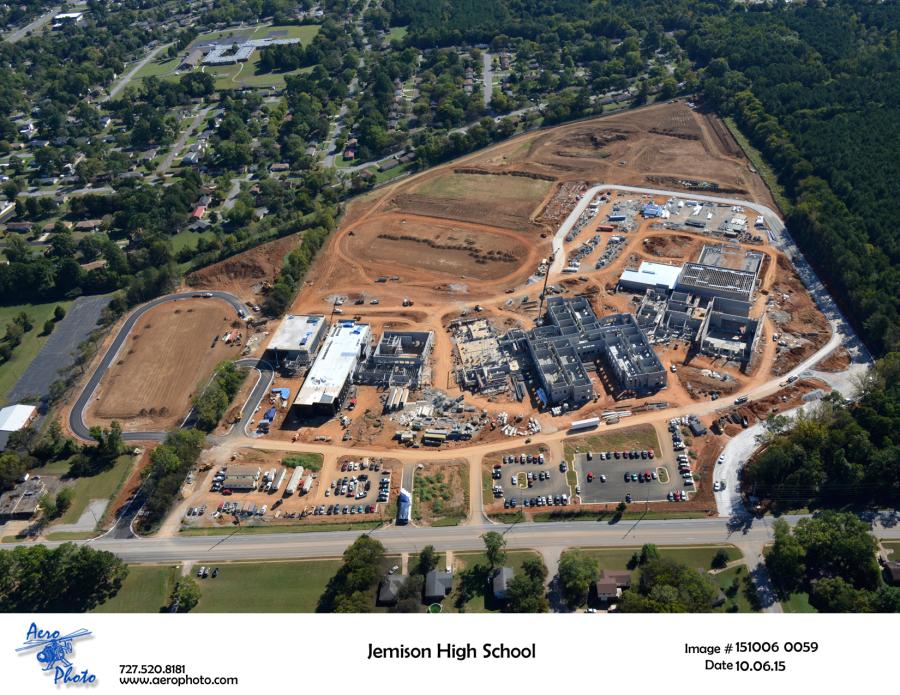 Named for two history-making astronauts, the new Jemison High School and McNair Junior High are taking shape in Huntsville, Ala. Built on a combined campus off Pulaski Pike, both schools are expected to open in August 2016, and will house students from four existing or recently closed schools. Total cost of the project is $70 million.

“Everyone is excited about this,” said Jeffrey Gattis, construction and renovation coordinator for Huntsville city schools. “The way we are doing things is so forward thinking. You're not going to find anything like it here, or maybe in the entire country. It's precedent setting.”

Gattis said, “The old high school had served its purpose, but it was time to either do a major renovation or construct a new building. This is also part of a U.S. Department of Justice consent order to build a new school.”

The consent order required the district to provide more equitable educational opportunities for its black students. In 2014, a federal judge appointed a mediator in the battle to rezone Huntsville city schools.

The Jemison-McNair campus can serve 1,100 high school students and more than 500 middle-school pupils, and will have combined space in excess of 331,000 sq. ft. (30,750 sq m). Jemison will serve students from Butler and Johnson high schools, while McNair will host students from the former Davis Hills and Ed White middle schools.

Gattis said building more than one school at a time is a balancing act.

“There are a million things going on all the time. I have a team of architects and engineers and program managers keeping me up to the minute on all things related to the buildings and schedules. It's very busy. I actually have five buildings across the city going on.”

The Huntsville school board approved a contract with Auburn-based Bailey-Harris Construction to build the combined Jemison-McNair campus. Rob Flaherty Bailey-Harris, senior project manager said, “The schools are side by side, with only a walkway separating the junior high from the high school, so the same activities are basically taking place. We have placed approximately 98 percent of the slab on grade, and have been working diligently in getting our load bearing block walls installed all summer for the entire project.”

All load bearing block is complete at McNair, as is structural steel and joist. In half the junior high, the mechanical, electrical, plumbing and fire sprinkler rough-in is virtually finished. Brick work has begun, and crews should have the buildings in the dry in the next two months. Due to the overall mechanical plan, it will be early January before workers will have conditioned air and be able to start finish trades in the available buildings.

At Jemison, load bearing block is complete in four of the five buildings, and crews are working on completing the task on the last structure by the end of November. Structural steel and joist and deck installation continues in three of the five buildings. Mechanical, plumbing, electrical and sprinkler rough-in is complete in the first floor of the main classroom building and is continuing at all other locations.

Crews have been responsible for all storm drain, site utilities, roadways, parking lots, curbs and gutter and athletic field installations. With the exception of landscaping and final paving, the site work is more than 80 percent complete. Permanent power should be available by the end of December.

The mechanical site piping to each building is 60 percent complete, along with work in the main mechanical room. Tasks yet to be completed include roofing and finish trades, along with flooring, painting and MEP trim outs in all the buildings.

As for some of the biggest construction challenges, said Flaherty, “Each school gymnasium is a designated storm shelter, which required intensive coordination of trades and numerous inspections to meet the rigorous structural requirements. ”

Battling the elements has also been an issue.

“The weather was miserable when we were trying to get out of the ground and get slabs poured,” Flaherty said. “We had a few days last winter when roads in areas iced up too much to even get to the site. During the summer, it continued to rain well above normal for this area. The last two months have been much better. Despite the weather, we are still on schedule.”

Track hoes and a skid steer have been used for the footings, site utilities and slab work. A concrete pump truck is required for the concrete placement, while cranes are needed for the hollow core installation and structural steel. As many as 12 forklifts have been on site at one time.

The property, which is just north of Stringfield Road, is located near a rock quarry. The location drew criticism from parents worried about blasting and crushing at the quarry spreading tiny silica particles into the air around the school site. The city's air quality chief, however, claims the amount of particulate matter is well below levels considered potentially harmful by the Environmental Protection Agency.

The Jemison-McNair campus will include a 0.9-mi. (1.4 km) racetrack as part of the Greenpower USA initiative, which will give students in the district's advanced manufacturing academy the opportunity to learn how to design, build and race electric cars. Jemison, Grissom High and Whitesburg P-8 will be the base of operations for the program, the first of its kind in the country. Most of the track uses existing parking lots and drives. Workers have modified some of the curbs and drives, to help with safety.

Both schools will have state-of-the-art technology in place, along with the latest in security measures. Officials have taken extreme measures to ensure the safety of students, incorporating key swipe doors, cameras monitoring activities and lock downs that can be performed at the push of a button.

The schools were designed by Chapman Sisson Architects. Rob Mercer, Chapman Sisson design director, said the vision was creating a 21st-century school that showcased the latest trends in STEM education, as well as the creation of a Career Academy.

“The Career Academy spaces were placed along the main corridor of the school to engage students in the education possibilities offered that could play a part in their future success. The vision for the building was to create inviting spaces that would enhance the learning experience through modern materials, daylighting and a strong sense of place.”

The high school's college academy will be funded by Huntsville city schools within a magnet program at the school. Students offered admission to the program can complete up to sixty hours of college credits while earning their high school diplomas.

The academy will allow students and families to avoid the significant costs of college tuition and expenses incurred during the first two years of undergraduate studies. The college courses will be taught by college professors, while high school classes will be led by teachers chosen to be a part of the college academy team.

Mercer said one of the design team's chief concerns was effectively incorporating two separate schools on the same campus in close proximity.

“This was ultimately successful from an educational standpoint by creating education programs that form a progressive link between younger and older students. Architecturally, the building links the two schools together by consistently carrying the design elements across the entire campus. A common area between the two school lobbies bridged by a large, dynamic canopy visually ties one campus to the other.

“It was a challenge to keep student drop off/pick up traffic flow separate and efficient,” Mercer said. “In addition, separate bus and student traffic patterns had to be studied thoroughly, so that the campus could load and unload efficiently. Also, since both schools essentially function independently of each other, sports and other extra-curricular activities had to be studied in the site planning stage, in order to deliver a project that functions at any given hour of the day.”

For the architects, it was important for the structures to complement each other.

“This really affected our master planning,” said Mercer. “We wanted to give the schools a pronounced front door, which led us to doing a large canopy that covers the entries to the two main lobbies, providing a unity between the massing of the buildings. Common brick patterns and use of stone unify both schools.

“The schools vary from one level in their respective administration, gym, and cafeteria areas, to two levels at classroom wings. The high school's competition gym is technically two levels, but it is triple height, due to the lower court level. Each school has its own practice gym that doubles as a storm shelter. The schools are block and brick veneer with low slope roofing.”

As far as sustainability efforts, “We focus on efficiency via low maintenance materials, finishes and building systems, good R values in the walls and insulation and an overall tight building envelope. Features that have been proven over time to add value, such as high performance mechanical units, water saving plumbing fixtures and lighting sensors, were all incorporated into the building at a relatively low cost to the owner.”

According to Mercer, the firm's past experience designing schools was definitely helpful on this project.

“We have learned what materials last and which ones do not, and could be improved. We are constantly re-evaluating to grow our knowledge of what works through the course of each project. In addition, we have learned a lot about which materials are easy to maintain, yet still provide a level of quality in appearance and longevity.

“We hope that the school will be a source of pride for the students and parents, but most important, that it's engaging to the students. We would also like the school to be an asset to the community, by helping the public school system become a marketing tool to outside businesses looking for quality education facilities.”

Rena Anderson, director of community relations of Huntsville city schools, said the new campus is closer to where students reside and will help revitalize an older community.

“There's also the benefit of having 7th and 8th graders on the same campus, because they'll have shared experiences. It's about forming relationships early and building a consistent culture. We want our teachers to get to know these students, which will make for a smoother transition as they move on to high school.”

The new schools are named for Ronald McNair and Dr. Mae Jemison. McNair, the second African-American in space, was killed in the 1986 Challenger disaster. Jemison, a Decatur, Alabama native, won recognition as the first black woman to orbit the earth.

“These are two good role models,” said Anderson. “Students will learn they too can grow up to be anything they want. Dr. Jemison gave a motivational speech when she attended last year's groundbreaking, and she is looking forward to attending the ribbon cutting.”

Huntsville is home to NASA's Marshall Space Flight Center, and is nicknamed “The Rocket City” for its ties to U.S. space missions.