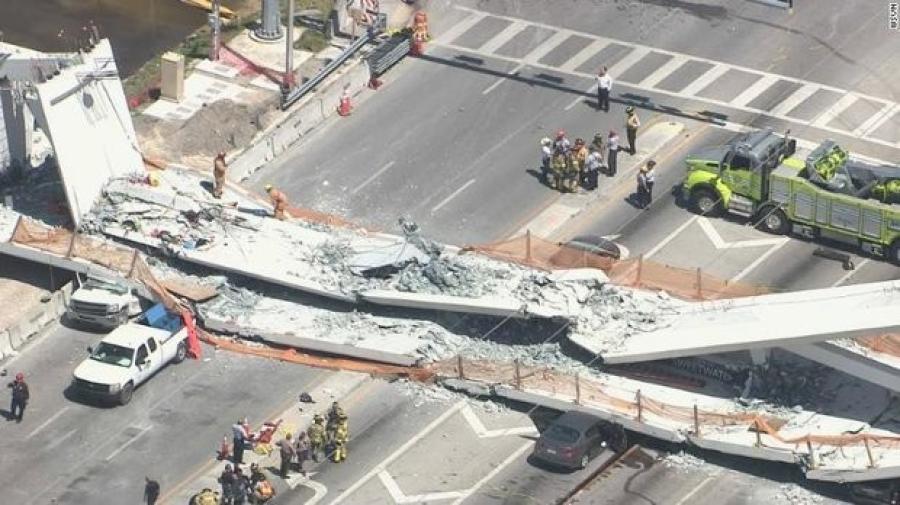 Florida Highway Patrol Lt. Alejandro Camacho said the bridge was still under construction when the collapse occurred, and was not yet open to pedestrians, CBS News reported.

According to the highway patrol, multiple people were killed and five to six vehicles were crushed, ABC News reported. Several people were put into ambulances at the scene, and according to Miami-Dade Fire Rescue, at least one person has been taken to the hospital as a trauma alert patient, CBS News reported.

In a tweet, Florida Gov. Rick Scott said, “I have spoken with Miami-Dade County Police Chief Juan Perez about the pedestrian bridge collapse at FIU. I will be in constant communication with law enforcement throughout the day.”

Scott said he would be on the scene this evening, CBS News reported.

FIU said in a statement, “We are shocked and saddened about the tragic events unfolding at the FIU-Sweetwater pedestrian bridge. At this time we are still involved in the rescue efforts and gathering information. We are working closely with authorities and first responders on the scene. We will share updates as we have them.”

View the scene on this video posted by Tech View:

On March 11, a portion of 8th Street was closed to put the 174-ft. bridge into position. The $14.2 million bridge's installation took “just a few hours,” an FIU press release said, and used “accelerated bridge construction” techniques, which, according to FIU, “reduces potential risks to workers, commuters and pedestrians and minimizes traffic interruptions,” ABC News reported. Construction was expected to be complete in early 2019.

The bridge was being built by Munilla Construction Management, who released this statement on Twitter:

“Our family's thoughts and prayers go out to everyone affected by this terrible tragedy…MCM is a family business and we are all devastated and doing everything we can to assist. We will conduct a full investigation to determine exactly what went wrong and will cooperate with investigators on scene in every way.”

View below for the video walk-through of the project:

When the bridge collapsed, two workers were replacing something on one side of it, CBS Miami reported.

This is a developing story. Please check back for more details as they emerge.