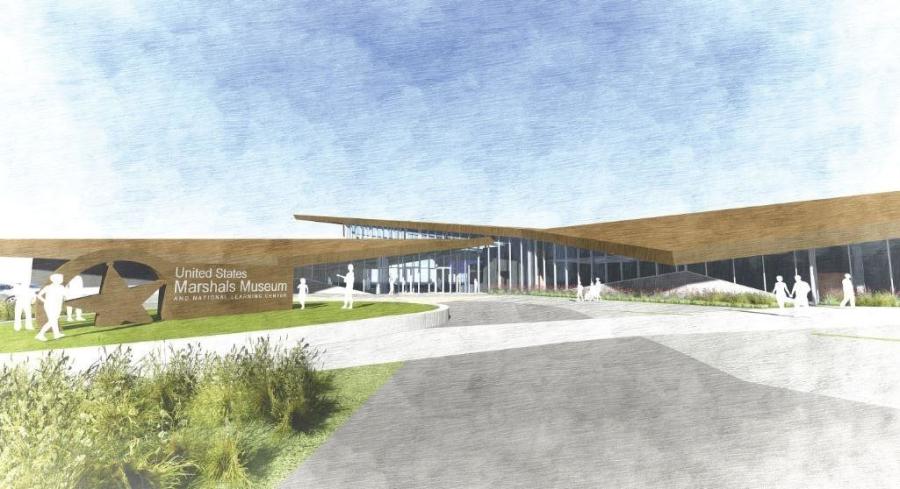 A rendering of the U.S. Marshals Service's national museum at Fort Smith.

Prep work has begun on the construction site of the U.S. Marshals Service's national museum by the Arkansas River at Fort Smith.

The $58 million, 53,000-sq.-ft. museum is scheduled to open Sept. 24, 2019, on the 230th anniversary of the Marshals Service, Arkansas Online reported. While site prep is happening now, actual construction is set to begin in spring 2018, according to Patrick Weeks, the museum's president and CEO.

The work started Oct. 2, with crews from Garrett Excavation moving dirt to stabilize the site. According to Weeks, close to 1,500 trucks will deliver 23,000 cu. yds. of dirt in the coming month to create a base for the building to rest upon, Arkansas Online reported. Last year, engineers determined that 16 ft. of soil would have be to replaced at the site, as the ground was unstable. The dirt currently at the site contains debris from a tornado that struck the area in 1996.

Weeks said that the replacement soil will settle and compact in the winter months, leaving a three-to-five-ft. platform on which the museum will then be built, Arkansas Online reported.

According to Weeks, the museum still needs to raise around $22 million to pay for the project.