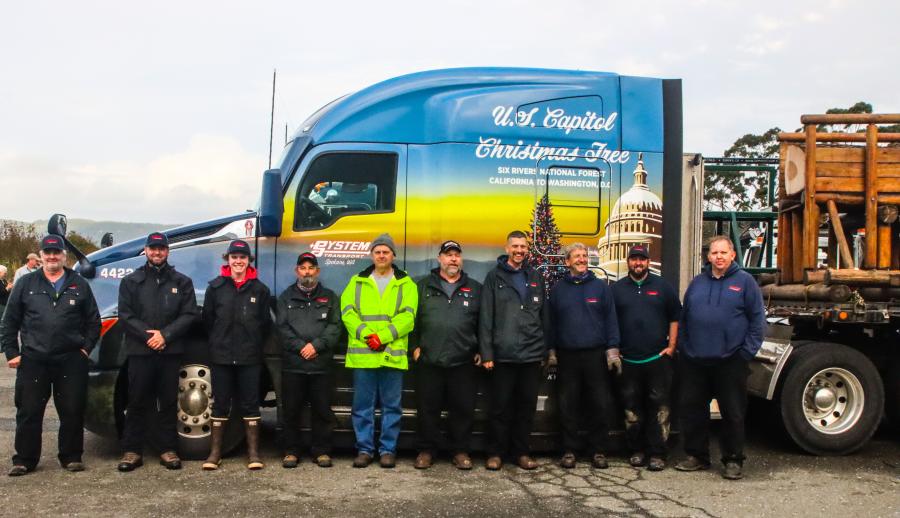 For six System Transport drivers, the opportunity to transport the 2021 U.S. Capitol Christmas Tree from the Mad River Ranger District of the Six Rivers National Forest in California to Washington, D.C., was an experience of a lifetime.

"Christmas has always been such a special holiday to me and my family, so to spread the holiday cheer throughout the country was truly an honor," said Jeremy Bellinger, who has driven 3 million miles over the course of his 21-year career with System Transport.

"I've been involved in transporting equipment to British Columbia for the 2010 Winter Olympics in Vancouver and have hauled utility poles in response to wildfires in California, but being one of the drivers responsible for transporting the U.S. Capitol Christmas Tree is truly the highlight of my career."

The 2021 U.S. Capitol Christmas Tree Tour, which began Oct. 29 in Crescent City, Calif., featured 17 community celebration stops in towns, cities and national parks along the 3,300-mi. journey to Washington, D.C. The tree was delivered to the U.S. Capitol Building on Nov. 19.

According to Schnell, who split time driving the Kenworth T680 Next Gen with fellow driver English from Sacramento to Tulsa, Okla., the holiday spirit was on full display at the tour stops during their leg of the tour.

"The turnout at the tour stops, especially in small towns, was really something. To bring the holiday spirit to each of the stops and see so many people come out to participate in the celebrations was special," said Schnell. "I've known about this tour for quite some time but never imagined I'd be one of the drivers involved. To have the opportunity to transport the Capitol Christmas Tree is something I'm proud of and is an experience I'll always remember."

For System Transport's drivers, the tour was the first time each got behind the wheel of Kenworth's latest addition to its Class 8 lineup, the Kenworth T680 Next Gen. The T680 Next Gen is Kenworth's most aerodynamic truck to date and features the new customizable 15-inch digital display, latest Kenworth SmartWheel, signature LED lighting, and additional advanced driver assistance systems.

According to English, who drives a Kenworth T680 classic for System Transport, the technology inside the T680 Next Gen is what initially caught his attention when he stepped inside the cab for the first time.

"The new electronics, like the [Kenworth 15-inch] digital display, was something I grew fond of once I learned how to adjust the gauge settings to show the ones I wanted to appear on the screen," said English. "The Next Gen offers a comfortable and enjoyable ride and is a step above the T680 that I drive regularly for System Transport."

With prior experience hauling windmill blades and utility poles for System Transport, the drivers were prepared heading into the U.S. Capitol Christmas Tree Tour to handle the challenges of hauling a more than 100-ft. long trailer.

"It was difficult at times navigating some of the narrow streets along tour stops, but we all have plenty of experience hauling oversized equipment for System [Transport], so we were ready for it," said Schnell.

Bellinger, who drove the last day of the tour and was responsible for delivering the Christmas tree to the U.S. Capitol, said he worked out a deal with Brunk for the opportunity. Bellinger and Brunk were responsible for hauling the tree from the tour's first stop in Crescent City to Sacramento and again from Tulsa to Washington, D.C.

"I have some family in D.C., and planned on flying my family out from Washington [state] to see us deliver the tree to the Capitol, so I wanted to be the one behind the wheel when the tree arrived," said Bellinger. "The deal was, if I got to drive the truck to the Capitol, Bill [Brunk] would drive the truck over the Golden Gate Bridge. It was a win-win. It was an incredible experience to be involved in this tour and celebrate the holiday season with my family at the end of it."