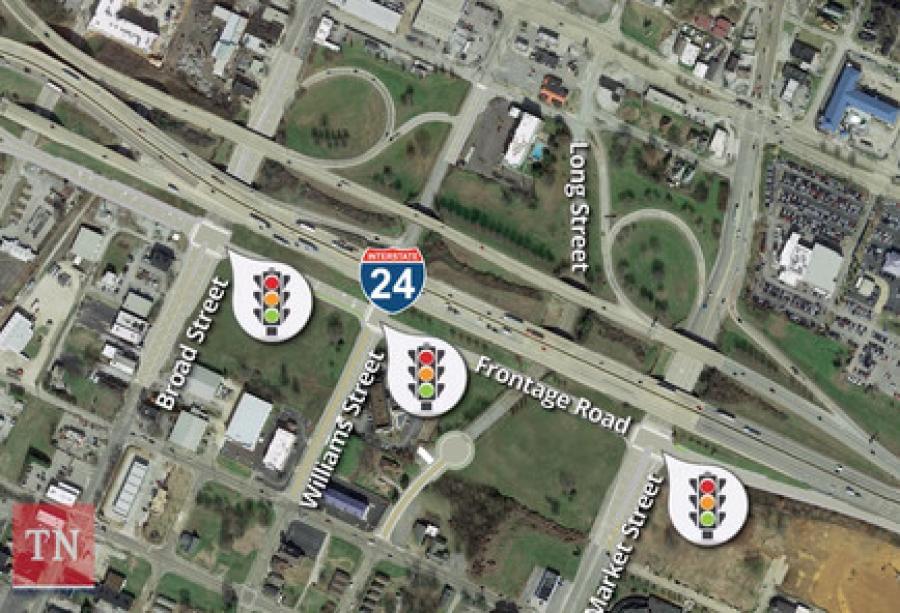 The project will include bridge and retaining wall construction and installation of new traffic signals and lighting. (TDOT photo)

State and local officials say construction will soon begin in Chattanooga, Tenn., on another multi-million-dollar modification project on Interstate 24.

The Tennessee Department of Transportation (TDOT) said Oct. 6 that it recently awarded a contract for $31.9 million to Wright Brothers Construction Company Inc. to modify the I-24 interchanges at Tennessee State Route 2/Broad Street and SR 58/Market Street in Chattanooga. The contractor is based in Charleston, Tenn.

The TDOT said the 1.6-mi. project will replace the loops and ramps that serve as exits and entrances for I-24 East and U.S. Highway 27 to Broad Street, Williams Street and Market Street with a new one-way ramp and frontage road.

The new ramp and road will exit I-24 west of the I-24/U.S. 27 interchange between the old Wheland Foundry site and the Tennessee River, and run parallel to I-24. In addition, the project will include bridge and retaining wall construction and installation of new traffic signals and lighting.

At the interchanges, construction signs have already been installed, and crews are in the very early stages of relocating utilities. This phase of the highway project will last several months, TDOT said. Most of the effort will occur on the south side of I-24 (Lookout Mountain).

The I-24 interchange modifications in the downtown are scheduled for completion on or before Aug. 31, 2023, according to the transportation agency.

Chattanooga leaders are thrilled with the continued upgrades to I-24 in their community.

"Providing safe and effective connectivity is important for community access and enhancing economic development," said Chattanooga Mayor Andy Berke. "The new interchange along I-24 will serve as a catalyst for the growth of this important site that will continue to enhance and expand the neighborhood's footprint."

His sentiments were seconded by Hamilton County Mayor Jim Coppinger.

"This new interchange will help lead to the revitalization of this part of Hamilton County," he said in a statement. "We are extremely grateful to TDOT Commissioner Clay Bright for his leadership in making this new interchange happen."

The I-24 interchange improvements effort was one of 962 critical transportation projects included in the Tennessee's 2017 IMPROVE Act legislation.